Staff member
"The Church of Hawkwind" is another very mediocre album with a few shining lights scattered here and there. Too many of Hawkwind's 80s albums were like this; lots of instrumentals and effects but no real songs to speak of. Oh well, there are 15 tracks so surely something will be worth salvaging here. The songs worth hunting down are 'Nuclear Drive', 'Damage of Life' and 'Some People Never Die', but the rest unfortunately are rather dull and uninspiring instrumentals.

'Nuclear Drive' is a rocker with Brock in fine form on vocals and some soaring space lead guitar from Huw Lloyd-Langton. It begins proceedings well however, the album dives into some awful New Wave punkish chanting vocals unfortunately on tracks such as 'Star Cannibal'. The spacey electronics are annoying on this rather than an augmentation. The lyrics are downright idiotic, about dining on human flesh. Hopefully the rest of the album will be better I was thinking at this stage.

This is followed by spaciness and drones on 'The Phenomenon of Luminosity' and it has the intriguing futuristic voice over and sequenced synth lines. The synths sound a bit like the early Kraftwerk sound from "Autobahn". Okay a bit of a filler but not bad with repetitive trance phrases.

Next is 'Fall of Earth City', with layers of synth and Brock's distant vocal narration. Once again not really a song but an instrumental with a bit of a spoken poetry.

Next, is 'The Church', a short thing with sequenced synths and some crowd protest chanting. I have no idea what this is saying but it works as a transition. There is tons of filler on this album such as 'Joker at the gate' which is nothing but a synth instrumental, with voice overs, but hardly inventive. Of the better tracks one should mention 'Some People Never Die' that has heavy breathing and effects sounding like Pink Floyd's 'On The Run'. There is even a sequenced section. "Oswald has been shot" speaks an urgent voice and it is evident that the piece is in tribute to the events of the assassination attempt. It is interesting on this album that sounds like a pot pourri of ideas rather than a coherent whole. I liked hearing the news reports and reporters though on this. It is rather powerful to hear about Senator J. F. Kennedy's assassination too, the screams are here and the actual reports "get the gun, stay away from the gun, his hand is broken".

'Damage of Life' is a better song as it at least feels like a song, running at a decent length and the musicianship is not just sequenced synths and voice overs. Brock's vocals are welcome after all the narrations previously, and the melody is quite pleasant. The musicianship is simple with crunching riffing guitars and spacey synths but this works well and is the definitive highlight amongst a sea of mediocre forgettable instrumentals.

'Mists of Meridan' is another instrumental based track, repeating the same droning sounds, but features some nice vocals from Madame X. She is not a space whisperer like Gilli Smyth but still nice to hear the feminine touch after all the raw vocals previous. It takes some patience to get through the track with ambiant layer upon layer of synth, and atmospherics pervading over all.

'Light Specific Data' is another instrumental based track, but has a cool guitar riff that locks in and I didn't mind all the spacey effects.

Overall the album suffers from being too focused on instrumentals and transitions rather than any decent memorable rock songs. There are only about 3 decent songs so this is a very disappointing affair. I can squeeze out 2 stars though as it still offers something for the Hawkwind collectors. 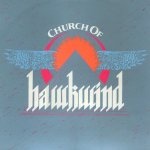