Staff member
"It is the business of the future to be dangerous" is yet another 90s Hawkwind album that has forgettable tracks though is rather pleasant while listening. It is not the Hawkwind that I grew to love over the years but is rather a very different beast, a tranquil thing that just focuses on instrumental music and dull repetition. Nothing really stands out as a classic song, rather it all meshes together into nothing more than background music. Here we go with another very uninspired studio release churned out during Hawkwind's most troubled period. Reduced to a threesome the band sound desperate to capture the old magic but it rarely reaches point 4 on the Rickter Scale.

'It Is The Business Of The Future To Be Dangerous' begins things with synth effects, a strong tribalistic percussive rhythm, and spacey electronics. It is basically an instrumental, sounding more like Ozric Tentacles with psychedelic spaceytronics and hypno beats. This music could be a cure for insomnia it is so dreary, not a good start.

'Space Is Their (Palestine)' is a monster epic at almost 12 minutes in length. Not musch happens though as it is mostly improvised. 'Tibet Is Not China, Pt. 1' is a chanting thing, Tibetan Monks in space perhaps. The gentle airy music drifts along painfully slow and does not seem to go anywhere. 'Tibet Is Not China, Pt. 2' is more of the same as if we needed it. A riff cranks up but it is too late, as I have already lost interest in this polyfiller mediocrity. Boring is the word I am searching for.

'Let Barking Dogs Lie' is another long song, about 9 minutes, and has some intriguing lead guitar and techno beats, but soon wears thin. I guess it is okay compared to the previous material but this is still not great Hawkwind by any stretch of the imagination.

'The Camera that Could Lie' is a reggae song, and it actually is better than all the dire ambiance previous. I am not sure if the band are sending themselves up here but whatever the case, it is certainly different territory Hawkwind are treading in. Brock sounds fine here and the spacey electronics are almost an intrusion with the reggae beat.

'3 Or 4 Erections In The Course Of A Night' is an instrumental with funny horses braying, a female voice, space kanoodling, and layers of synth ambience.

'Techno Tropic Zone Exists' has some nice orchestrated staccato stabs and Brock's echoed vocals are welcome. Once again we have digital tech dominating over space rock, and it is not all that inspiring, perhaps best left to those who want to get stoned. The music is uninteresting to me however, and I really cannot recommend this album to a Hawkwind fan or space rock fan. I would recommend it to those who like trance, techno digitalised sequencing and weird spacey ambience.

'Gimme Shelter' is a Rolling Stones cover with spacey effects, a cool riff locking in with the familiar melody. Brock is quite okay on vocals. I actually like this better than the hugely over rated Rolling Stones, who only have about ten decent tracks overall in my opinion. The harmonica on this track is a nice touch too and I like the guitar lead work.

So overall more spacey ambient psych music without many highlights to speak of. A real shame as the band are capable of brilliance, not this tired lacklustre effort. This is almost as bad as "Hawklords ? 25 Years on", almost but not quite that terrible. How this must have alienated Hawkwind fans. What an absolute waste of talent. Do not bother unless you collect everything Hawkwind have released. 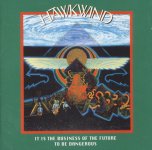