Staff member
PXR 5 was actually recorded before 1978's 25 Years On, but was shelved when the departure of Simon House prompted the brief breakup and reformation of Hawkwind as the Hawklords before being released in June 1979. Stylistically, it resembles the previous two albums given a bit of a punkish, New Wave sheen - a sort of halfway house between Quark, Strangeness and Charm and the more accomplished New Wave-space rock fusion accomplished on 25 Years On.

Though it felt a little underpowered to me at first compared to Lemmy-era material (or, for that matter, 25 Years On), PXR 5 actually ends up with a bit more to recommend it than I remember. Opening number Death Trap is as hard as anything on 25 Years On, Jack of Shadows is a playful fantasy number inspired by a Roger Zelazny novel, whilst Uncle Sam's On Mars has justifiably become a live staple.

Speaking of live, material, in fact, some of the tracks on here - including Uncle Sam's On Mars and the heavy, driving pulse of Robot - are taken from live performances, revealing that onstage Hawkwind had been keeping things heavy even as they'd been applying a lighter touch in the studio during their Charisma period. Though putting out odds and sods collections of studio and live off-cuts would become a really bad habit of Dave Brock's in later years, this time around it actually works for a useful purpose - namely, giving the album a more varied sound than any of the other Charisma years releases from Hawkwind, and putting it into contention with 25 Years On for "best of the Charisma era". 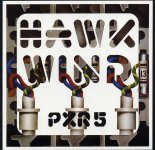