Staff member
Dang, this is certainly a criminally underrated classic. Many Hawkfans loyal to the sludgier side rejected this album, calling the mighty Hawkwind pop sellouts. They were wrong, while Hawkwind have cleaned up there sound and adapted melody, they still had the Hawkiwnd spirit and now were embracing the sounds of glam and new wave, but in a very progressive way.

Robert Calvert is very much in the center of this album. His singing is similar to that of David Bowie or Marc Bolan. His space age lyrics are full of humor and wit. He also banned drugs in the studio, which helped for a more focused and clean sound. Melody is not abused in this record either, you'll often find your yourself humming along with 'Quark, Strangeness, and Charm' or 'Days of the Underground'.

Hawkwind are also at a peak in songwriting here. As I said before there are tons of of great melodies, but even more great lyrics. 'Spirit of the Age' has some of my favorite lyrics ever about space travel, android lovers, and really being a clone:

'I am a clone, I am not alone Every fibre of my flesh and bone is identical to the others Everything I say is in the same tone as my test tube brother's voice And there's no choice between us, if you'd ever seen us you would rejoice in your uniqueness'

'Damnation Alley' is about speeding through a city during a nuclear war and the music also aids to the lyrics by actually taking on the same trip of a Captain Calvert, with soaring electronics and a powerful drive provided by a punkish guitar riff. 'Quark, Strangeness, and Charm' is about Albert Einstein...and his lack of luck with the ladies. It's hilarious and the comparisons of relationships to Quantum Chromodynamics really fits Calvert's space age themes. Hassan I Sabha actually predicts war in the Middle East over oil, which happens to the subject of today's news. 'Days of the Underground' recalls the days when Hawkiwnd were the soundtrack to the post-hippy counterculture.

Some might complain that the playing here isn't flashy enough, not enough fancy soloing and complexity. What matters in this case is the songs are great and all the musicians play for the song. Little pretense and pomposity to be found here, just great music.

The electronics are somewhat subdued in this record. While they still play an important part in the space trip that is Hawkwind, they're not as up front. Powerful guitar leads the band through the jams and compositions, while Calvert proves to be a great vocalist and frontman. The downside is that all the riffs seems to be similar, and that could annoy some listeners.

Some po-faced proggers who hate glam rock or new wave need not apply, because there is much of that to be found here. This is certainly an album to corresponds with 'The Spirit of the Age', pun intended. Otherwise if your open minded and can accept band growing in influences, this album is a must have. It's actually one of my favorite albums, but it's not really a masterpiece. It just sounds really great to me and it's very entertaining and mind expanding at the same time. Certainly an excellent addition to the collection of an open minded progger. 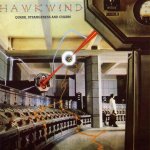 Yeah, the critics had observed the band's sense of humor in this particular album but were not complimentary about the development of the band's music and they mostly felt that the improvement in lyrics did not match the music instrumentally nor structurally.
Show hidden low quality content
You must log in or register to reply here.
Share:
Facebook Twitter Reddit Pinterest Tumblr WhatsApp Email Share Link
Forum Community