Hawkwind - The Chronicle Of The Black Sword - Album Review

Staff member
"Chronicle of the Black Sword" is another killer album with weird conceptual content from the creative mind of Michael Moorcock, and remains a fan favourite. Much of the material is available in live format on "Live Chronicles", but the studio album has garnered a cult following over the years

'Song of the Swords' is a fiery start with strong vocals and lyrics about the main concept of the sorcerer and the swordsman; "Take up the sword and take up me, the Chaos Lord's answer is to be, Your path is chosen, you have no choice, Come join us now! thus spake the voice. It's paradise".

'Shade Gate' is an instrumental with 80s retro synth melody ending on a zither sting. 'Sea King' has good echoed vocals and pulsing rhythm, spacey effects and a distorted guitar riff. The lead break is effective and the Hawkwind interstellar sound effects.

'Pulsing Cavern' is a transitional piece with ambient mellotron and a heartbeat rhythmic pulse. It leads into 'Elric the Enchanter'. The strong beat and echo on vocals is classic Hawkwind. The lyrics are terrific telling the tale of Elric's exploits; "Sprawling in a Ruby Throne, His head cupped in his hands, The Lord of Dragons, Elric's thoughts, Were of quests to far-off lands, The Black Sword was at his side, Murmuring in its scabbard cold, Waiting for the moment to arrive, To drink the very essence of souls." The instrumental lead break is spacey guitar and weird effects. The riff changes into a delightful half time feel which is ominous and doomy; "He did not know that the sword he'd hold, Would turn his priceless empire into fool's gold, The truth, the shadow of the sword will hide, 'Til it's too late, a traitor at his side." The harmonies are excellent and this is perhaps the highlight of the album.

'Needle Gun' is one of the more popular tracks featuring on compilations. It was strange hearing this in context of the other tracks rather than on compilations. The sound is a straight 4/4 guitar rocker, with infectious melody and anti-tattoo lyrics; "Hear my laughter in your head, It's a pity, it's a shame nothing's been said, It's a vaccination joy with the ultimate death toy, It's gonna make you run, needle gun." It feels more like a typical heavy rock anthemic song than a space rock epic, but still fits in well with the album content.

'Zarozinia' features Brock's great vocals on the slow space ballad, with wavering synth tones, minimal bass and refreshing wind effects. The lyrics are quite beautiful; "Fire of destiny, Fire of reality, Zarozinia, The burning of flesh, Flames loving caress, Zarozinia, Water from a thousand tears, Feeling of a thousand years, Flow over me." One of the highlights of the album.

'The Demise' features a weird whispered narrative and otherworldy screams sets the scene. The preternatural soundscapes segue into 'Sleep of 1000 Years' with Brock's familiar multi-tracked vocals and a driving riff. A thumping bassline and spacey lead guitar augment the atmospherics.

'Chaos Army' begins with motorik pulsing sonics and weird percussion, until it breaks into a riffing guitar for 'Horn of Destiny'. Brock's vocals are sung in trademark style with some gruelling lyrics; "Many with madness in their eyes, stare gibbering at the white-hot skies, foul birds circle overhead shadowing the living and the dead." The lead guitar swells and sporadic percussion are effective in the lengthy instrumental section.

This is a concept album in the same spirit of classic Hawkwind of the 70s and is a welcome return to form. It is one to seek out though not easy to find. The search will be worth it as it is one of Hawkwind's greatest 80s albums. 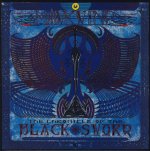