Hawkwind - Warrior On The Edge Of Time - Album Review

Staff member
"We are the warriors at the edge of time, We are Humanity's scythe to sweep this way and that, And cut the Enemy down as weeds."

For years this treasure had been unavailable on CD and I remember asking a specific dealer in all things prog when "Warrior on the edge of Time" was going to be available again and he spouted off something about troubles with the label. For years I had to just listen to the tracks available on compilations; 'Assault & Battery part I', 'Motorhead' and 'Kings of Speed', all excellent tunes in their own right. Then the Hawkwind remasters came out and I targeted "Warrior on the edge of Time". So it was with a huge amount of anticipation that I sat back to listen to the album. It is one of the Hawkwind masterpieces.

'Assault and Battery' is quintessential Hawkwind with some terrific lyrics; "Lives of great men all remind us we may make our lives sublime, And departing leave behind us footprints in the sands of time, Of hewn stones the sacred circle where the wizened sages sat, Let us try to remember all the times where they were at." The extended section on 'Assault & Battery/ The golden void part II' is mind blowing. The lyrics conjure a mystical transcendental evocation; "The golden void speaks to me denying my reality, I lose my body, lose my mind, I blow like wind, flow like wine, Down a corridor of flame, will I fly so high again." The spacey mellotron of Simon House is incredible and he also plays some stirring violin. Dave Brock sounds amazing on vocals, very forceful and hitting notes dead on, and his guitar work is exemplary. Nik Turner is a revelation on Tenor and Soprano saxophone, and also flute, all absolutely perfectly executed on this album. Lemmy's pulsating bass guitar is a pleasant addition. Simon King's percussion is as good as ever, with a constant hypnotic rhythm and power blasts at the end of each verse. Allan Powell also doubles up on drums and it is always a delight to hear Mike Moorcock's sci-fi narrative prose, something that I look forward to on classic albums such as this.

The music is ultra-spacey and mesmirising especially on motorik instrumental hooks like the Krautrock influenced 'Opa-loka'. The spacey effects are integral to the Hawkwind atmospheres and this track is soaked in symphonic spacey textures. The waves crashing on the beach and seagulls are a strong atmospheric embellishment. Folky 'The Demented Man' has a huge mellotron sound that roars majestically over an acoustic chord structure. At this point I am transfixed by the power of the album's atmospherics.

'Magnu' is a lengthy track with a killer riff, similar to 'Born To Go' or 'Masters of the Universe'. Brock's vocals are towering as he sings of mystical adventures; "Magnu, horse with golden mane, I want your help yet once again, Walk not the earth but fly through space as lightning flash or thunders race, Swift as the arrow from the bow, come to me so that no one can know." The instrumental is psychedelic sax and a driving rhythm as Brock chants the mantra "until we diminish by the reign of night". The music slows down, instruments drop out and Turner's sax spirals off somewhere as the everpresent alien effects are heard more distinctly. The violin of Simon House is incredible, as good as I have heard from the master, very high pitched and improvised generating an emotional resonance. The percussion is tom toms and very strong beats that lock in consistently. The sound is transfixing and jams along in the same vein as much of the material on the brilliant "Space Ritual" epic.

After this the multi echoed voice of Nik Turner narrates that we are standing at the edge and it is dark, we are the unkind, we are the soldiers of the edge of time and we are tired of making love, where is desire, it's cold, so cold, where is our joy, where is our fire. The section reminds one of the amazing recitations on "Space Ritual" which made it such an endearing unique experience. I like Turner when he is in this weird mood but not into his singing as much. The next track 'Spiral Galaxy 28948' is a deliriously spacey mellotron soaked rhythmic piece in 6/8. The wall of mellotron turbulence and fuzzy bass, conjures images of interstellar travel and a beautiful flute chimes in with precision and expertise, floating along the oceans of star clusters.

A Dalek like mechanised voice warns that "we are the wind which will blow the ash away as if never existed, but first we must know the enemies, we are the betrayed!" This estranged poetry leads to 'Dying seas' which has a throbbing bassline from Lemmy and some jagged distorted guitar riffs from Brock. The vocals are multi tracked and alienating. The electric violin is incredible slicing back and forth almost like a dark Irish jig but creating very intense serrations, very much like Van der Graaf Generator. The effervescent synth solo washes over with waves of icy glacial augmentations, sparkling over galactic soundscapes.

The next track is 'Kings of speed', a rocking Motorhead style track that I am very familiar with from compilations. The lyrics are very cool; "We're gonna take a tasty trip on Frank and Beasley's rocket ship, The biggest attraction, the brightest star, boys you're going fast and far". The fact that Lemmy was a speed addict, and about to be incarcerated for it, makes this song even more potent; "We guarantee you the sweetest ride, You'll go so far you'll think you've died, Step this way lads it ain't no lie, Try your luck and reach the sky."

The bonus track is 'Motorhead' which of course is Lemmy's baby literally, and I had heard this many times, and it is always a killer sounding like Motorhead for some reason. It is a portentous song as this is Lemmy's last Hawkwind album as he would be fired for drug trafficking and begin his own angry response 3 piece band. The lyrics are effective; "Can't get enough and you know it's the righteous stuff, Goes up like prices at Christmas, Motorhead."

The packaging of the album is great too especially the artwork depicting an archetypal warrior awaiting battle on the precipice of a jagged cliff. The bildungsroman narrative ingrained in the mystical vision depicts a coming of age as the warrior awaits his destiny in the corridors of flame of the Golden Void. The concept of the album is typically unfathomable and open to interpretation, but it is an integral component of Hawkwind's enigmatic mystique.

Every track on this album is a sheer delight encompassing one of the most consistent Hawkwind albums of the 70s. The album generates its own specific atmosphere that the band could not capture on subsequent albums until the wonderful "The Chronicle of the Black Sword". The band were able to inject just the right amount of spaceyness with swathes of mellotron and sonic effects, along with astonishing musicianship with flute, sax and violin. Brock is excellent on vocals and he is joined by one of the strongest lineups for the chameleonic band, that changed lineups considerably over its long tenure. "Warrior on the edge of Time" is a masterpiece because everything worked to create stratospheric soundscapes, and the band were obviously operating on all cylinders at their creative peak. 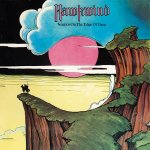