Staff member
Bassist and founding member Steve Harris had previously been quoted as saying that he imagined the band would release a total of fifteen studio albums, and choosing to give the fifteenth such an ominous title seemed to be a clear portent of the end. Thankfully, subsequent months brought an admission that the album’s title was “largely mischief” and that the British heavy metal legends definitely intended to be recording again. But whatever fans were expecting for the group’s sixteenth studio effort, it probably wasn’t this: The Book of Souls is easily the most ambitious album that Iron Maiden have ever made, clocking in at a massive 92 minutes and featuring a couple of tracks that extend well beyond the twelve-minute mark.

As with most Iron Maiden ventures this side of Brave New World, The Book of Souls sees the band choosing to stick to their guns, with sprawling, guitar-centric passages in their trademark galloping style being the dominant theme of proceedings. But The Book of Souls also serves to remind why Iron Maiden remain relevant today, more than thirty years after they were first formed. The album’s length alone, for one, is proof positive that the group has not lost an iota of the passion that led them to create now-seminal classics like The Number of the Beast or Powerslave. More importantly, you also get the sense that their latest purple patch has been made possible by nothing other than a pure sense of kinship and interpersonal harmony – a famously rare commodity in the world of modern heavy metal. To that end, The Book of Souls’ greatest success is how well it manages to translate that camaraderie into some of the most satisfying work that the “classic” Iron Maiden line-up has produced thus far. The winding instrumental passages in the album’s two standout tracks, "The Red and the Black" and "The Book of Souls", for instance, sound so stupendously triumphant that they can only be the work of a band that truly believes they can simply do no wrong.

Unlike Iron Maiden’s previous two albums, 2006's A Matter of Life and Death and 2010's The Final Frontier, Steve Harris – traditionally the band’s principal songwriter – does not receive a writing credit for all of the songs on The Book of Souls. Reportedly, all six band members brought in approximately an hour’s worth of material to the recording sessions, which ultimately resulted in all of them – save for drummer Nicko McBrain – receiving a writing credit on The Book of Souls. This collaborative approach to writing and recording turns out to be a mostly positive development, as each individual manages to bring something noteworthy to the table. Frontman Bruce Dickinson’s “If Eternity Should Fail”, for example, makes a solid claim towards being Iron Maiden’s best opening track since “The Wicker Man”, thanks to a strikingly aggressive mid-song riffing sequence and an extremely grippy chorus. Later on, guitarist Adrian Smith combines with Harris and Dickinson to create a couple of compositions that pay homage to the band’s longtime fans by making obvious references to some of their signature classics: the groovy "When the River Runs Deep”, for instance, feels like a spiritual successor of “Moonchild”, while the desperately cheesy yet surprisingly effective triplane-themed jaunt “Death or Glory” recalls the zeitgeist of “Aces High”. Augmenting the natural dynamism of these compositions is none other than Dickinson himself, who may be on the wrong side of fifty, but proves here that his quasi-operatic tenor has not lost any of its otherworldly power.

Although Iron Maiden’s musical style continues to remain largely unchanged, to say that The Book of Souls does not try to mix things up at all would be fairly disingenuous. The aforementioned “If Eternity Should Fail”, for instance, features the band’s first collective use of drop D tuning, while first single "Speed of Light” features one of the most unhinged performances that Iron Maiden have produced in recent times. Elsewhere, the album's final song, “Empire of the Clouds”, which replaces “Rime of the Ancient Mariner” as Iron Maiden’s longest composition, features Dickinson on piano and concentrated orchestral accompaniment. More importantly however, the song is also a significant improvement on the “epic closers” that recent Iron Maiden records seem wont to contain; if the start-stop nature of “The Legacy” was a bit too difficult to digest, and “When the Wild Wind Blows” verged on over correction, “Empire of the Clouds” focuses instead on being cerebral and evocative, and ends up being all the better for it.

In short, The Book of Souls is what every heavy metal fan might want a new Iron Maiden record to be and more. The group’s legacy was hardly ever in need of further embellishment, but on this occasion they’ve actually gone out and made another album for the ages. And on a slightly more personal note: in all honesty, I am yet to come across a double album that truly justifies its length, but The Book of Souls might just be as close as they come. Metal fans take note: the beast is back, and it still has your number.

Tracklist for The Book of Souls:

1. If Eternity Should Fail

4. The Red and the Black

5. When the River Runs Deep

6. The Book of Souls

8. Shadows of the Valley

11. Empire of the Clouds 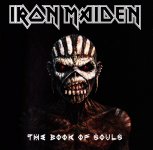