Staff member
These quirks aren't particularly aggravating (and haven't kept the group from being among metal's most consistent artists), but they're head-scratchers nonetheless. Give them credit however, even though The Final Frontier is the band's fifteenth album and they really don't have anything left to prove, there's still a conscious effort to address some of old problems. In some cases they're successful and in others, not so much; "Satellite 15… The Final Frontier" and "El Dorado" are two of the record's weaker songs, and aren't particularly representative of the album as a whole (continuing a strange trend which saw them promote Virtual XI with "The Angel and the Gambler", Dance of Death with "Wildest Dreams" and A Matter of Life and Death with "The Reincarnation of Benjamin Breeg"). More pressing is Iron Maiden's continuing reliance on prog-influenced metal. Although it's been generally accessible on other post-reunion albums, it makes for a far more challenging listen this time around. Essentially, The Final Frontier is the kind of record that takes several listens to truly appreciate, but it's definitely worth it.

In terms of scope, The Final Frontier isn't particularly different from Dance of Death or A Matter of Life and Death. Much of the album is dominated by sprawling, generally guitar-centric passages, and bassist Steve Harris' lyrical work expands on previously explored themes (references to religion are especially common, as are personal struggles). What differentiates The Final Frontier from past records, however, is its lack of immediacy. The hooks aren't quite as instant, the riffs aren't quite as urgent, and the album as a whole sounds dense, even long-winded at times. The bizarre instrumental that opens "Satellite 15… The Final Frontier" seems to serve no purpose other than to introduce the record in a quasi-futuristic manner with synthesizer and programmed drums (!), and is promptly forgotten when Bruce Dickinson's shouts mark the transition into the band's more familiar brand of metal. It's a flaw that repeats itself a few times throughout the album; "Isle of Avalon" sports a number of ill-advised guitar solos that sound out of place in the generally low key track, while the two minute clean guitar intro in "The Talisman" is far too reminiscent of A Matter of Life and Death's "The Legacy". With three tracks exceeding (and two approaching) the nine minute mark, it's due to moments like these that contribute to The Final Frontier's bloated tendencies.

With repeated listening, the album's strengths become more apparent and it becomes easier to overlook its weaknesses. The final four songs (intro to "The Talisman" aside) are on par with just about anything this side of Seventh Son of a Seventh Son; Dickinson is at his best in the sombre sounding "Starblind", combining with exceptionally written riffs and a long, yet tastefully instrumental section to make for a definite highlight. "When the Wild Wind Blows" is another standout, not necessarily for the instrumental complexity that guitarist Dave Murray promised, but rather for Harris' vibrant storytelling. Speaking of lyrical creativity, there are definite signs of improvement on the band's part. Of The Final Frontier's ten tracks, only the title cut features the mindless repetition of the song's name ala "No More Lies". If Iron Maiden haven't exactly reinvented themselves they've gotten over that.

Recently, some of Iron Maiden's most underrated songs have been their shorter pieces, such as "The Fallen Angel", "The Mercenary", and "The Pilgrim". While the lack of complexity probably generates less fanfare (it's understandably easier to get excited over an epic like "Paschendale" than a "New Frontier"), but their more straightforward songs are just as well crafted. The melodic riff styles utilized in "Mother of Mercy" and "The Alchemist" slightly resemble Iron Maiden's classic work (albeit through a modern lens), while "Coming Home" cycles between a sentimental, ballad-esque piece and rousing rock. With the possible exception of "Starblind", "Coming Home" is the most inspired song on the album, and it only has two solos. Imagine that! Seriously though, one almost wishes these kinds of songs were more predominant as they're just as great as longer "epics", but offer up a different vision of the band's sound that they've seemed to lost sight of.

The Final Frontier isn't the easiest record to get into, but there's a wealth of material to be enjoyed after initial spins. While tracks like "Coming Home", "Starblind", and "The Man Who Would Be King" don't have the same flash as some of Iron Maiden's more famous songs (at least at first), they aren't lacking in the vigour or enthusiasm the band has almost always maintained throughout their career. And ultimately, this is what makes The Final Frontier worth returning to time and time again.

Tracklist for The Final Frontier:

9. The Man Who Would Be King

10. When the Wild Wind Blows 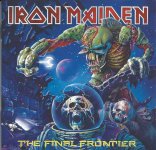