Staff member
Hard rock had suffered from the backlash caused by the advent of punk and new wave in the late-70s, but there were exceptions to the rule and IRON MAIDEN was its saviour and bastion of the New Wave Of British Heavy Metal (NWOBHM), alongside JUDAS PRIEST, MOTORHEAD, SAXON, DEF LEPPARD and DIAMOND HEAD. Although dogged by a plethora of line-up changes, the fruits of their labour produced a handful of post-Bruce Dickinson sets from 1982’s `The Number Of The Beast’. Fast forward thirty years, the singer is still at the helm of their legendary live shows, having had time as a solo artist between 1993 and 1998.

Formed late in 1975 by bassist and main songwriter Steve Harris in Leyton, East London, and taking their moniker from an “Iron Maiden” torture mask he’d seen in the movie, The Man In The Iron Mask, he called upon friends and friends-of-friends to perform in the band; all but guitarist Dave Murray (he superseded Dave Sullivan and Terry Rance plus Bob Sawyer), including singers Paul Day, his successor Dennis Wilcock and drummer Ron Matthews fell by the wayside; even Murray was absent for a while in 1977. A more settled line-up consisting of Harris, the re-instated Murray, drummer Doug Sampson and singer Paul DiAnno were in rehearsal mode by late ’78.

The band’s amphetamine-fuelled trad-metal soon procured them a rabid following around the capital, and the following year they released their self-financed debut EP, `The Soundhouse Tapes’. The 7-inch single came to the attention of Rock DJ Neal Kay, who sent them on a “Heavy Metal Crusade” tour at London’s Music Machine, the resultant publicity and increasing interest in the band leading to a deal with E.M.I. almost immediately; this coincided with personnel changes, Clive Burr replacing Sampson, while Dennis Stratton took over from brief member Tony Parsons.

Their debut single, the 100-horsepower outlaw fantasy `Running Free’, hit the UK Top 40 early in 1980, soon followed by a self-titled debut album, IRON MAIDEN {*8}, which reached the Top 5. The ‘Maiden helped create and embody the cartoon caricature that the genre would become, while Derek Riggs became the group’s artistic designer and created “Eddie”, an evil skeleton who appeared on album sleeves, poster bills and theatrical stage shows. Despite production problems, the debut album remains one the most enduring of their career, the material raw and hungry where later efforts have tended towards flabbiness. Masters of the power chord, tracks like `Iron Maiden’ (in a similar vein to `Black Sabbath’ by BLACK SABBATH on their own eponymous set a decade past) and `Charlotte The Harlot’ were prime head-banging material, DiAnno’s vocals more guttural punk than metal warbling. Yet the band were no musical novices, the stop-start exhilaration of `Phantom Of The Opera’ sounding considered and spontaneous at the same time; PC/Politically Correct this band were not, although the phrase could be interpreted in a different way with regards to their next album sleeve, a depiction of Maggie Thatcher meeting an untimely end. A hasty follow-up produced by Martin Birch, the aforementioned KILLERS (1981) {*7}, lacked the focus of the debut, something which didn’t deter metal fans from buying it in droves. Very much in the mould of RITCHIE BLACKMORE’S RAINBOW or JUDAS PRIEST, the twin-guitar licks of Murray and new boy Adrian Smith, the highlights came thick and fast through `Wrathchild’, its double-header flip `Twilight Zone’ (only available on the US version) and `Purgatory’. Banned in Chile for being interpreted as “Devils and Satanists”, IRON MAIDEN were also the first band to play “live” on Top Of The Pops since The WHO.

By the release of THE NUMBER OF THE BEAST (1982) {*8}, DiAnno had been replaced by Bruce Dickinson (from SAMSON), more of a vocal acrobat in the traditional metal sense. More accessible and melodic, if not as exciting, the chart-topping record was a massive success (Top 40 in the States), packed with songs that would go on to form the backbone of the `Maiden live set. `Run To The Hills’ was a particular favourite, giving the band their first Top 10 placing in the pop singles chart, the title track, `Hallowed Be Thy Name’ and the Charlotte The Harlot sequel, `22 Acacia Avenue’ were other giants.

Introducing drummer Nicko McBrain into the fold, Top 3 sets PIECE OF MIND (1983) {*7} and POWERSLAVE (1984) {*7} carried on in much the same anthemic vein, the band capitalising on their staggering worldwide popularity with a mammoth touring schedule. With their trademark ghoulish mascot, “Eddie”, horror fantasy artwork and a readily identifiable sound, IRON MAIDEN were arguably the very essence of heavy metal, a phenomenon which traversed all language boundaries in much the same way as dance music in the 90s. On the singles front, the thematic `Flight Of Icarus’, `The Trooper’, `2 Minutes To Midnight’ and `Aces High’ kept up their Top 20 run of hits. Concert document from their global travels, LIVE AFTER DEATH (1985) {*8} left no stone unturned as it paraded all their greatest pieces in their full glory – a rousing rendition of prog-metal `Rime Of The Ancient Mariner’ (all 13 minutes from their last studio set) was its showpiece.
SOMEWHERE IN TIME (1986) {*6} marked something of a departure, a more ambitious and musically diverse collection both in terms of songwriting and playing. Synth-friendly and adapting a slight lean towards futuristic themes, tracks such as `Caught Somewhere In Time’, Adrian Smith-penned hits `Wasted Years’ and `Stranger In A Strange Land’, nevertheless helped it rain in a UK Top 3 spot (Top 30 in America).

This avenue was further explored on SEVENTH SON OF A SEVENTH SON (1988) {*7}, a concept affair that piled on the synth and sharpened the harmonies, resulting in four consecutive Top 10 singles: `Can I Play With Madness’, `The Evil That Men Do’, `The Clairvoyant’ and the very WISHBONE ASH-like `Infinite Dreams’.

The steadfast reliability of IRON MAIDEN’s fanbase was amply illustrated when a series of EPs (repackaging the band’s singles) all went Top 10 almost without exception. But there was tension in the ranks with Harris favouring a return to their chest-beating roots, while guitarist Smith was less than pleased with the prospect. In the event, Smith was replaced with Janick Gers and the band released the no-frills NO PRAYER FOR THE DYING (1990) {*5}, a back to basics effort which spawned the group’s first No.1 single, the side-splittingly titled `Bring Your Daughter… To The Slaughter’; the previously released `Holy Smoke’ had hit Top 3.

FEAR OF THE DARK (1992) {*6} gave the band yet another No.1 album, but for many non-affiliates of metal, it lacked the bite and vision of their overseas counterparts such as METALLICA, MOTLEY CRUE and a new metal genre to contend with – grunge! Apart from the quick-fire loyal hit, `Be Quick Or Be Dead’ (which reached No.2 but was out of the Top 75 after only 4 weeks) and the similarly fated `From Here To Eternity’, there was little to savour apart from the glorious title track curtain call. It was the last to feature the tortured tonsils of BRUCE DICKINSON, who’d now departed to continue his solo career having released `Tattooed Millionaire’ in 1990. While decisions were being made on who would fill the singer’s shoes, IRON MAIDEN marked time by delivered three monster concert cash-in CDs for the thrifty fanbase; all released over a 6-month timespan in 1993: A REAL LIVE ONE {*6}, A REAL DEAD ONE {*4} and a double LIVE AT DONINGTON {*5}.
Bruce’s eventual replacement was Blaze Bailey (ex-WOLFSBANE), who made his debut on THE X FACTOR (1995) {*4}, no, not that one, but a record that achieved their lowest chart placing (No.8 in UK and No.147 in the States) for a studio set since the early 80s.

1998’s VIRTUAL XI {*4} was another relative disappointment although the IRON MAIDEN hordes took heart when Dickinson returned to the fray in early ‘99. The resulting tour was a blockbuster and paved the way for a new studio album featuring the classic line-up of Dickinson, Harris, Murray, McBrain and Smith alongside Gers who was retained as a third guitarist.

BRAVE NEW WORLD (2000) {*7} was released amid much fanfare and expectation, while the album was a return to ‘Maiden’s halcyon mid-80s period – in terms of both gothic fantasy songwriting and crunching power-chord assault – pleasing long-time fans no end and seemingly securing the band’s place above the post-metal wilderness; `The Wicker Man’ (and the giant `Out Of The Silent Planet’) produced their best UK chart performances for some time, while the album itself donned a US Top 40 placing.

If the rather pointless ROCK IN RIO (2002) {*4} live set perhaps showed up – however unintentionally – the gap in ambition between classic ‘Maiden and their stodgier latter-day fare, the back to basics near chart-topper DANCE OF DEATH (2003) {*6} succeeded in harnessing at least some of that kinetic energy of old as they fast approached their 30th year in the business. British heavy metal was on a resurgence once more as top hits (however brief) `Wildest Dreams’ and `Rainmaker’ were pitted against lengthy Dungeon-and-Dragons-like theatrics such as `No More Lies’, `Journeyman’ and `Paschendale’.

A belated double-disc souvenir from the accompanying tour, DEATH ON THE ROAD (2005) {*5}, generating a re-recorded spin-off hit in golden Iron nugget, `The Trooper’, while fans looked forward to new beginnings. Album number 14, A MATTER OF LIFE AND DEATH (2006) {*7}, was just what the doctored ordered, injecting a complex concept live in the studio. From `The Reincarnation Of Benjamin Breeg’ and the equally epic `Brighter Than A Thousand Suns’, `The Legacy’ and `The Longest Day’ (just a smidgen of the highlights here), IRON MAIDEN were back to their bristling best.

2009’s adventurous original soundtrack, FLIGHT 666 {*6} – a double-disc recorded a year earlier in a raft of countries around the globe – took their live-set tally beyond anything customary to the norm, but fans just couldn’t get enough of the good air-mileage flying high here. THE FINAL FRONTIER (2010) {*6} was another to grace the album charts, while yes, another double-CD (or DVD) live update, this time recorded in Santiago, Chile, in 2011, EN VIVO! (2012) {*6} served up a nice balance of the old and the new.

Cancer scares for Dickinson removed after months of subsequent chemotherapy, IRON MAIDEN were hot to trot again for the Kevin Shirley-produced double-CD, THE BOOK OF SOULS (2015) {*9}. All the more mouth-watering and worthy for its dastardly delay, its prog-metal concepts made the No.1 set stand out from their more recent CV entries, in fact it rated as their best in decades, possibly of all time. A game of two halves or a nightmare narrative relayed in theatrical live-like aplomb by the soaring Dickinson and Co (`Tears Of A Clown’ scribed by Harris and Murray in the wake of comic actor Robin Williams’ death), disc one opened with the conventional and riff-a-thon `If Eternity Should Fail’, `Speed Of Light’ and `The Great Unknown’. Clocking in at 13 and 10 minutes respectively, `The Red And The Black’ and the title track were fist-pumping classic rock scene stealers, reminiscent of Zeppelin’s “Kashmir” days or yore. Disc two, meanwhile, explored grandiose heroic themes such as `Death Or Glory’, `Shadows Of The Valley’ and `The Man Of Sorrows’, culminating with the labyrinth 18-minute `Empire Of The Clouds’; Celtic-metal concerning the British R101 airship disaster of October 1930.

The slog of a subsequent world tour (running from March 2016 to the following May) was rewarded in November 2017 when THE BOOK OF SOULS: LIVE CHAPTER {*7} bolted into the Top 20 (Top 50 US). 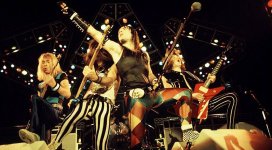 I remember I couldn't believe my eyes and ears when my dear friend (RIP Mike, you are missed) told me a parcel full of new albums arrived in his record shop way back when. I used to scuffle inside those parcels to find some new stuff and out comes Eddie in full splendour....I had never seen anything like him on a cover sleeve before ! My fav Maiden tune is forever

Liliac drummer on this Maiden classic

Staff member
I do like the early Pre Dickinson maiden music.

When Bruce Dickinson Teamed Up with Mr. Bean