Jethro Tull - Minstrel in the Gallery

Staff member
The term 'under-rated gem' is often an abused, over-used and undeserved descriptive. Many recordings that seem rather projective of future greatness or that contain one or two fleeting moments of inspiration are often categorized as such. Other recordings might be worthy of wider attention, but are mistakenly circumvented due to the fact that they’re either too difficult to locate or totally out of print. Then, there are the records which are sitting on every record store shelf, staring each one of us in the face, yet, for the most part, go unnoticed by everything but airborne dust particles. Their greatness is open to examination by all, yet the majority of us show casual disinterest, even undue disrespect to them. Minstrel in the Gallery is one such under-rated, overlooked gem. This record has always been right there between the uber-popular Tull titles like ‘Aqualung’ and ‘Thick as a Brick’. Has been there since 1975. You’ve probably seen its cover dozens of times, maybe even picked up its jewel case a time or two, but never thought, or cared to, inquire within. And, that’s a shame for those of you who love good, hard-hitting Progressive Rock. Because this one’s got everyone’s taste covered. And, despite it’s progressive nature, it’s both melodically and rhythmically accessible after a couple of spins. The music on ‘Minstrel’ proves to be a perfect hybrid partnership between the “acoustic meets heavy-electric” direction of the ‘Aqualung’ era, and the ultra-progressive, constantly shifting and challenging direction of ‘Thick As A Brick’. This composite mixture is evidenced all over the album, but there is no better example of this balancing act than the monster-sized track - ‘Baker Street Muse’.

This track, which takes up the majority of Side Two, runs the gamut from the most delicate introspective, acoustic passages to some all out keyboard and guitar-driven Prog. Plus, of course, every incremental magnitude of intensity en route. ‘Baker St. Muse’ is certain to satiate the intellectual, contemplative needs of the cerebral cortex, delivering enough twists and turns to keep the synapses firing like a high-performance hot rod. The title track and ‘Black Satin Dancer’ are another couple of tunes comprised of several different sub-sections, both relying heavily on the electric. The former employs a musical blueprint which I’ve never heard tried before or after. It begins like an Elizabethan acoustic piece, with only the incomparable vocal phrasing of Ian Anderson acting as accompaniment. The track then departs the 16th century and quickly darts to the late 20th, where a Progressive-Metal sub-section, which would impress Rush or Dream Theater, takes over for the next few minutes. This part gives way to the ’Rock Song’ portion of the piece, featuring the coolest, heaviest, and most progressive Tull riff since ‘To Cry You A Song’. The lyrics to this third and last section features the same lines as the first, but presented with a very different cadence. Really impressive stuff. ‘Black Satin Dancer’ is much like ‘BSM’, in that it begins with some delicate flute and piano flourishes before the electric instruments and drums take over. The intensity of this track ebbs and flows in a very unpredictable manner, from start to finish, keeping the listener enthralled throughout.

The album also features one of the few best Jethro Tull acoustic guitar pieces, ‘One White Duck’. And, a claim at being one of the few best JT acoustic pieces is no small matter of boasting, because Ian Anderson has written some of the best work ever derived from the instrument. His approach to composing on the acoustic is one of the most unorthodox in the business. The finished product always sound incredibly rich, melodic and instrumentally compelling, yet all of the tunes are built on some type of incredibly complex formula. Each one seems to employ an alternate tuning, a capo, an uncommon time signature and some unheard-of rhythmic technique. The man is absolutely brilliant and One White Duck is further proof of this. Many of the Tull remastered CDs give the fan another half album’s worth of bonus material which is able to compete with the tracks on the album proper. This one really only contributes one more tune worthy of inclusion with the rest. ‘Summerday Sands’ is a very catchy ‘single’ type song that really should have been part of the original release, at the exclusion of maybe either ‘Requiem’ or ‘Cold Wind To Valhalla’. This move would have balanced out the recording a little more and gave the band something to deliver to radio. But, the record is really fine as it stands. It’s one of my favourite in the Jethro Tull catalog, and one of my all-time Progressive Rock records. If you find yourself adoring this one, I’d suggest exploring things like Genesis’ Trick of the Tail, Black Sabbath’s SBS and Gentle Giant’s The Power and the Glory.

Tracklist for Minstrel in the Gallery:
1. Minstrel In The Gallery
2. Cold Wind To Valhalla
3. Black Satin Dancer
4. Requiem
5. One White Duck/0^10 = Nothing At All
6. Baker St. Muse
7. Grace 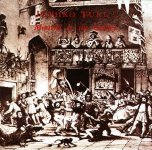