Staff member
As steely and steadfast as his home-turf of Sheffield, croaky crooner JOE COCKER was a man on a mission, to emotionally go where no white man had gone before, while leading the pack (from the late 60s onwards) for ballsy British blues singers. Notably unblessed with songwriting abilities that made him slightly vulnerable toward relaying the odd misnomer, several classic reinterpretations still managed to surface, his most memorable coming in 1968’s gargantuan chart-topper, `With A Little Help From My Friends’. With “friends” in high places such as The BEATLES, LEON RUSSELL, STEVE WINWOOD, JIMMY PAGE et al, plus the possession of a voice that could elevate even the works of RAY CHARLES (among others), JOE COCKER was a legend.

Born John Robert Cocker, 20th May 1944, Crookes, Sheffield, Yorkshire, England, COCKER’s primary musical influence was the aforementioned “Genius of Soul” RAY CHARLES. On hearing the seminal `What’d I Say’, while also taking in the blues sounds of LIGHTNIN’ HOPKINS, MUDDY WATERS and JOHN LEE HOOKER, a young Joe dreamed of the day he’d get a chance to emulate his heroes. Pipefitter by trade and pub singer by semi-profession, his band Vance Arnold & The Avengers (from the small acorns of The Cavaliers) supported British Invasion combos such as The HOLLIES, which led to Decca Records cutting a BEATLES cover, `I’ll Cry Instead’, in autumn ‘64.

Although the single failed to achieve any real success, COCKER gave his career a second bash in ‘67, recording a demo tape for the influential Denny Cordell, the producer of PROCOL HARUM’s `A Whiter Shade Of Pale’. This proved a shrewd move; his subsequent single, `Marjorine’ (cut by Cordell), a minor hit and leading to a deal at the mighty A&M conglomerate via British base Regal Zonophone.

Autumn/winter 1968 saw COCKER catapulted to fame with a charismatic cover of LENNON & McCARTNEY’s `With A Little Help From My Friends’, overshadowing the Fab Four’s version by a country mile. On session were the much in-demand Jimmy Page on guitar (pre-LED ZEPPELIN) and B.J. Wilson, whose preference to COCKER’s own Grease Band would perturb the singer slightly; Chris Stainton (bass), Tommy Eyre (keyboards), Mickey Gee (guitar) and Tommy Reilly (drums) would duly augment Joe’s powerful, gravel-throated voice.

With heavyweight fame looming large, COCKER hired manager Dee Anthony, who promptly booked the singer (and band) for gigs in America; The Grease Band had now incorporated guitarist Henry McCulloch (ex-EIRE APPARENT) into the fold, as Gee and Reilly made way for Kenny Slade. The Cordell produced WITH A LITTLE HELP FROM MY FRIENDS (1969) {*7} album featured the talents of STEVE WINWOOD and Matthew Fisher, amongst others, while it received critical and commercial (Top 40) acclaim across the big pond. Highlighting inspired versions of DYLAN’s `I Shall Be Released’ and `Just Like A Woman’, as well as a spell-binding rendition of TRAFFIC’s `Feelin’ Alright’ (a minor hit in America), host Ed Sullivan duly made them at home on his TV talk-show. With the festival scene buzzing, COCKER and his Grease Band appeared in the States on a series of five gigs, culminating at the Woodstock Music and Arts Fair in Bethal, New York, whereupon his full-on performance of `With A Little Help…’ summed up the mood of the weekend.

His sophomore long-player JOE COCKER! (1969) {*7} produced a Top 10 hit in the UK with a LEON RUSSELL-penned `Delta Lady’; the raucous album characterised COCKER’s primordial, blasting vocals on the likes of, among others, The BEATLES’ `She Came In Through The Bathroom Window’ and `Something’, The LOVIN’ SPOONFUL’s `Darling Be Home Soon’ and LEONARD COHEN’s `Bird On The Wire’.

Duly dismantling The GREASE BAND after a hectic two years on the road (they’d continue in their own right), JC’s next outfit was assembled a matter of weeks later; said to be for a few gigs he’d almost forgotten about. The “Mad Dogs” combo, made up of LEON RUSSELL and a full horn section from the recently disbanded DELANEY & BONNIE (& Friends), almost immediately created another monster hit with a re-vamped version of The BOX TOPS’ `The Letter’. A live recording, MAD DOGS & ENGLISHMEN (1970) {*7} – recorded at The Fillmore during the tour of the same name – solidified COCKER’s fame, while the set rocketed to No.2 on the Billboard chart; a year on it was released on film, premiering at Cannes.

The ROLLING STONES might’ve patented the concept of a “Rock And Roll Circus”, but it was COCKER and Co who road-tested it. LEON RUSSELL wasn’t as engagingly camp a ringmaster as the lip-smacking JAGGER, but at least his Deep South credentials were genuine. Despite the Anglo-fied title, there were more Yanks than Brits in the 11-strong line-up, one which infamously included three drummers. That statistic alone pretty much told one all one needed to know about this enterprising double album; a full-on, often overblown, endlessly worthy attempt to spread the blue-eyed rock gospel. Leon had just clocked off from a similar crusade with DELANEY & BONNIE, and carried that freewheeling spirit with him, as well as many of the same players. But it was COCKER who was the star, and there was no messing with that gas-fitter’s growl. Backed by a hollering “space choir”, the man whom RAY CHARLES described as “my only real disciple” ground his soul and grit through the songbooks of LENNON-McCARTNEY, JAGGER-RICHARDS, DYLAN, OTIS REDDING, ISAAC HAYES and erm… LEONARD COHEN.
Inevitably, the Mad Dog treatment mercilessly leached `Bird On The Wire’ of its ambiguity and robbed `Honky Tonk Women’ of its sordidness. `The Letter’ fared better, trading off the petulant sneer of the original for a chorus of biblical intensity; gospel harmonies shouted down the Devil, the brass section made like `Moondance’-era VAN MORRISON, while COCKER attempted to regurgitate his small intestine.

`Feelin’ Alright’ was another famous interpretation. However, it couldn’t claim the sheer Caribbean joie de vivre of the Trinidad Oil Company; COCKER, RUSSELL and choir manoeuvred it into the kind of blissed-out groove only this kind of gospel grand-design could conjure. DYLAN’s `Girl From The North Country’ stated it more with less, a grits ‘n’ gravy duet served hot with Leon’s chunky piano chords. In many ways, the 70s began here, setting the stage for all the polyester bacchanalia, apocryphal anecdotes and inflatable pigs to come. Ironically, the tour left Joe a wreck and led to a few years away from the music business.
A half-hearted comeback late in ‘72 saw the release of SOMETHING TO SAY {*4}, delivered to the Top 30 in the States as the exclamation-minus JOE COCKER. In a short space of time COCKER had lost the ground he’d gained at Woodstock.

I CAN STAND A LITTLE RAIN (1974) {*5} was equally disastrous, although the accompanying `You Are So Beautiful’ charted the following March. Personal turmoil continued, painfully illustrated by comedian/actor John Belushi’s hilarious impersonation of the singer on Saturday Night Live.

The rest of the 70s saw a string of lacklustre albums, namely JAMAICA SAY YOU WILL (1975) {*3}, the reggae-fied STINGRAY (1976) {*5} and his one-and-only effort for Asylum Records, LUXURY YOU CAN AFFORD (1978) {*5}. But for the likes of RANDY NEWMAN’s `I Think It’s Going To Rain Today’, DYLAN’s `The Man In Me’ (before his split with A&M) and a short supply of others not so strong in composition, JC garnered little praise from the music biz.
A stint with jazz-soul combo The CRUSADERS (on the single `I’m So Glad I’m Still Standing Here Today’) was followed a year on by another brief liaison, this time under the wing of Chris Blackwell’s Island Records. SHEFFIELD STEEL (1982) {*6} borrowed the talents of SLY & ROBBIE to relatively lukewarm effect, although ones that got away were surely re-treads of STEVE WINWOOD’s `Talking Back To The Night’, DYLAN’s `Seven Days’, JIMMY WEBB’s `Just Like Always’, ANDY FRASER’s `Sweet Little Woman’ and JIMMY CLIFF’s `Many Rivers To Cross’.

The comeback that had threatened to happen with the release of said album actually came within a few months; the classic duet ballad `Up Where We Belong’ – the love theme to the movie `An Officer And A Gentleman’ sung with JENNIFER WARNES – duly sat at pole position in America (Top 10 in Britain early ’83).
COCKER was on the move again, signing to Capitol Records, where he released several albums, appealing largely to the AOR market. The first of these, CIVILIZED MAN (1984) {*4} was typical mid-80s hokum, songs ranging from golden nuggets from the 50s and 60s pitted against trial-and-error tracks like SQUEEZE’s `Tempted’. COCKER (1986) {*4}, UNCHAIN MY HEART (1987) {*4}, ONE NIGHT OF SIN (1989) {*3}, JOE COCKER LIVE! (1990) {*5} and NIGHT CALLS (1992) {*5} all fell into the same trap, the latter reprising the likes of The BEATLES’ `You’ve Got To Hide Your Love Away’, ELTON JOHN’s `Don’t Let The Sun Go Down On Me’ and, with BRYAN ADAMS, on `Feels Like Forever’.

Re-living his two most celebrated recordings, `With A Little Help…’ and `Feelin’ Alright’, for the commercial “25th Anniversary” re-run of Woodstock ’94, COCKER’s second wind came as he’d just turned 50. Joining Sony’s 550 Music label, Joe continued to tour the globe and confound the critics with his durability, much in evidence on the singer’s accompanying Top 10 album HAVE A LITTLE FAITH (1994) {*5}; the title stemming from a JOHN HIATT track.

Following on from ORGANIC (1996) {*5} and ACROSS FROM MIDNIGHT (1997) {*5}, COCKER’s umpteenth set, NO ORDINARY WORLD {*5} was released towards the end of 1999. Fast-forward three years, on the evidence of RESPECT YOURSELF (2002) {*4}, Joe’s soulful rasp seemed to be continuing to mature like a fine malt: smoky, peaty and designed to put hairs on your chest. Sure, he still went over the top from time to time, inflating songs to bursting point, but on the likes of RANDY NEWMAN’s `Everytime It Rains’, the singer proved he still had one of the most durable voices in the business.

Bringing in a raft of the usual suspects (ERIC CLAPTON, JEFF BECK, Jeff “Skunk” Baxter, et al), E.M.I. Records and COCKER again targeted the adult contemporary market with a second successive 00s covers set, HEART & SOUL (2004) {*5}. The nostalgic scene still in demand through the likes of fellow rasper ROD STEWART, HYMN FOR MY SOUL (2007) {*6} took Joe back into the UK Top 10, his first time in just over a dozen years. With fresh impetus, an O.B.E. from the Queen and a growing self-belief once again, COCKER sailed through two further sets for Columbia Records: HARD KNOCKS (2010) {*5} and the Matt Serletic-produced FIRE IT UP (2012) {*4}.

Sadly, the latter Top 20 record was to be a final reminder of just how truly great a singer the man was, as he passed away from lung cancer at his home in Crawford, Colorado on 22 December 2014. Nominated numerous times for a Grammy, his re-interpretations of the classics have lasted the test of time, more so than many of the songs’ actual authors. 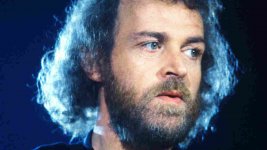