Staff member
Named after a famous South African football club (Kaizer Chiefs), indie-punks KAISER CHIEFS had struggled for many years before they finally found a bit of “Employment” in 2005; ironically the name of their debut set. Fronted by the energetic celebrity of Ricky Wilson, much of the band’s spirit and musical seed garnered comparisons with The JAM, The CLASH, XTC and BLUR, although fans might disagree with that analogy – `I Predict A Riot’, indeed.

One can trace the band’s roots back to 1996 when former Menston, West Yorkshire school chums, Nick Hodgson (drums), Nick “Peanut” Baines (keyboards) and Simon Rix (bass), left university – the latter two at least – to form Runston Parva (a play on words taken from a similarly-named East Yorkshire village). Together with Leeds lads, Ricky Wilson (vocals) and Andrew “Whitey” White, PARVA – as they were now re-titled – rehearsed and performed in and around the surrounding area until they were spotted by Mantra Records, a sub-division of Beggars Banquet. For a couple of years between 2001 and 2003, PARVA delivered three singles (`Heavy’, `Good Bad Right Wrong’ and `Hessles’) plus an album, 22 (2002) {*4}, but without much direction or guidance the band were booted into touch.

A sticky wicket for many industry moguls due to their unfruitful history, the lads decided on a complete overhaul of sounds and songs, resulting in Drowned In Sound, a label run by Sean Adams, releasing the KAISER CHIEFS’ debut single, `Oh My God’. A pulverising punk mantra, it sold out of its initial pressing in a matter of days, scraping enough sales for a minor chart placing. Enthused by its potential and a number of other certain hits, James Sandom took over the management.
The Yorkshire tribe were subsequently headhunted by the major labels, eventually opting for Universal subsidiary, B-Unique. A post-millennium tale of the natives getting restless, `I Predict A Riot’, was a festival anthem in the making, hyper-kinetically marshalled by big chief Ricky. The song initially went Top 30, re-energising `Oh My God’ into a fresh Top 10 position, which, in turn, paved the way for their hotly anticipated, Stephen Street-produced debut album, EMPLOYMENT (2005) {*8}. Although the record entered the chart at No.3, the band’s ever-growing legions of subjects as well as further hits, `Everyday I Love You Less And Less’, `I Predict A Riot’ (again!) and `Modern Way’, ensured its deserved place on top of the charts. Their infectious amphetamine-fuelled amalgam of good-time Britpop/rock/mod, together with kitchen-sink lyrics and Wilson’s defiantly Northern phrasing was enough to see them clean up at the Brit awards, although they just missed out on the 2006 Mercury Music Prize.

KAISER CHIEFS looked to be on easy street when they returned with a follow-up set, and an attendant No.1 smash hit in `Ruby’. The equally accomplishing YOURS TRULY, ANGRY MOB (2007) {*7}, dealt with the darker side of life: societal breakdowns of the working class, etc., etc., but choice cuts for the masses had to be `Highroyd’, and Top 20 hits not so massive, `Everything Is Average Nowadays’ and the title track.

Letting producer and fan MARK RONSON in on the act, OFF WITH THEIR HEADS (2008) {*6}, also received mixed reviews, although that mattered little to their frenzy of fans who managed to get it to No.2. Augmented by three members of NEW YOUNG PONY CLUB, `Never Miss A Beat’, cracked the Top 5, but there was no joy for follow-up `Good Days Bad Days’, which fell short of the Top 100! Boasting a cheeky guest list of LILY ALLEN (on `Always Happens Like That’) and rapper SWAY (on `Half The Truth’), it looked that the Kaisers had chosen alt-pop for indie-punk.

Three years was not a long time between albums for modern-day – or even “Modern Way” – outfits, but it was dicey to take a chance when your band was on the precipice of survival. Throwing in influences of early ULTRAVOX, WIRE and er… The TURTLES, THE FUTURE IS MEDIEVAL (2011) {*6}, was the KAISER CHIEFS in transition. `Little Shocks’, `Things Change’ and `When All Is Quiet’, had Ricky and the band sprawling all over the shop for a direction, but with some experimental tweaks it worked on many levels. With today’s hardship tales for group’s over a certain age to hit the singles charts, `Man On Mars’ – featuring soon-to-be-parting Hodgson on vox – had no chance of competing with the X-Factors, despite its poppy hook-lines. For their ever-decreasing American fanbase, the set found its way to the independents via a new title, “Start The Revolution Without Me”. Predictions to the band’s future was even money, although Vijay Mistry (from Club Smith) was now in the drum stool.

Back at number one but with sales dropping almost immediately, fifth album EDUCATION, EDUCATION, EDUCATION & WAR (2014) {*6}, it was indeed back-to-basics for a flagging post-Britpop act trying hard to keep in touch with its alt-pop pupils. As rambunctious and raucous as in previous playtime albums, KAISER CHIEFS failed to give listeners a “Ruby” or a “… Riot”, instead fist-pumping fans rallied to their cause through primary anthems, `Ruffians On Parade’, `Bows & Arrows’ and solitary hit, `Coming Home’. One thinks the lads from Leeds might have to stay in after school and do more homework before they’re ultimately expelled. And if that’s the case, will Ricky have a permanent job as a judge on BBC-TV’s The Voice.

Turning to neo new romantic/electro music by way of the Brian Higgins co-produced sixth album, STAY TOGETHER (2016) {*6}, KAISER CHIEFS were now fully immersed in commercial pop. The fact that former “The Voice” coach Ricky declared the Top 5 set would be strictly dance-pop was decidedly ill-conceived among fans who’d loved `…Riot’, `Oh My God’ et al, but was there a “Ruby” among its shiny stones? Well, the critics didn’t seem to think so. A FLOCK OF SEAGULLS, ABC and a “Let’s Dance” BOWIE/CHIC were names bandied about for the 8-minute closer, `Still Waiting’, whilst there were similar – at times unfair – fish-face-slapping for highlights `Hole In My Soul’, `We Stay Together’, `Parachute’ and `Why Do You Do It To Me?’.

Probably in readiness from the cauldron of broadsheet abuse they’d more or less absorbed as par for the course, 2019’s DUCK {*6} was amiable KAISER CHIEFS’ skip sideways into their own summery seventh heaven. Only Ricky’s buoyancy and effervescent aplomb kept this Ben H. Allen-produced set from diving into its own sunset; and hitting No.3 sort of stuck it to the man… in spades. Polydor Records were now championing their play-time pop, pop that hit a succinct note with fans of a certain age; whether that was retrospectively, or, indeed not. The hook-line and fist-pumping `People Know How To Love One Another’, `Record Collection’, `Wait’ and `Golden Oldies’, were not at all bad attempts at re-creating a radio-friendly new wave of Britpop, but in today’s mock-the-weak world of Facebook, Twitter and Instagram, it was now cool to criticise cool. 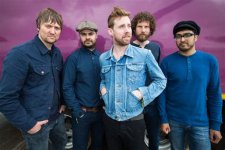