King Crimson - In The Wake Of Poseidon

Staff member
King Crimson fractured during the making on their second album; Greg Lake left to form Emerson, Lake and Palmer during recording, although he does sing all of the lead vocals except ‘Cadence and Cascade’. The group considered replacing Lake with Elton John, but ‘Cadence’ features Gordon Haskell, who’d front the band’s next album Lizard. Ian McDonald also left during recording; he only contributed to the writing of two songs, and it’s noticeable that they’re the two songs most markedly different from the band’s debut material. The jazzy ‘Cat Food’, and ‘The Devil’s Triangle’, based on Gustav Holst’s ‘Mars’, are the two new directions for the band.

Otherwise, a lot of the material on In The Wake of Poseidon has direct precedents from In The Court of the Crimson King – ‘Pictures of a City’ is essentially a reworking of ’21st Century Schizoid Man’, while the mellotron laden title track is similar to ‘Epitaph’. Both songs are good, but they do feel like retreads. ‘Cadence and Cascade’ is pretty – while Haskell’s vocals can be tough to take on Lizard, his voice works for this song. The jazzy ‘Cat Food’ works well – Sinfield’s surreal lyrics are a strength in this song – while ‘The Devil’s Triangle’ is also engaging.

It’s difficult to shake the impression that In The Wake of Poseidon is a less inspired facsimile of its predecessor, but in its defense it doesn’t have a tough avant-garde piece like ‘Moonchild’, and it’s one of the band’s most consistent and accessible albums.

Track listing:
Peace : A Beginning
Pictures Of A City
Cadence And Cascade
In The Wake Of Poseidon
Peace : A Theme
Cat Food
The Devils Triangle
Peace : An End 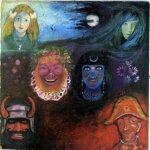