Staff member
The vocals are incredibly weak here, sung by one Boz Burrell, a guy who went off to form Bad Company playing bass only, not singing vocals, as he does here. The opening 'Formentera Lady' is folky, crass, silly, basic, stupid. It's incredibly banal, albeit dressed up in King Crimson Robert Fripp all so serious colours. It's a bunch of shite. Although Bob Fripp was a very talented guitar player, he did like his avant garde and his did like his music as art and he did like to think what he was doing was intelligent. The main achievement produced by 'Formentera Lady' is to make a bunch of decent musicians sound like they'd never played before in their entire lives. The song drags on for an awfully long ten minutes. Awfully long, because absolutely nothing happens. Well, bar a gently repeating bass motif and light vocals - nothing happens. 'Sailor's Tale' is a lot better in that it sounds like King Crimson. Sounds like the same band that produced 'In The Wake Of Poisedon' or 'In The Court Of'. Well, more or less. What it actually sounds like is that Robert Fripp was a guitarist ten years ahead of his time. Although, don't get me wrong. Far from sounding technically amazing, he sounds like a punk/new wave guitarist, like he's suddenly joined XTC ten years too early. Other points in the song, the swirling mellotron, reminds of earlier King Crimson. The bass and drums lock together in jazz/rock fusion and all is well. Only seven and a half minutes of avant-garde this time around. Yeah, that's 'Sailor's Life'.

'The Letters' has the all important King Crimson jazz sound in places, in other places descending into near total silence. Hey, groovy! 'Ladies Of The Road' sounds like Frank Zappa's 'Mothers Of Invention' farting over a talented bass players nose whilst, somebody they've just dragged off the street attempts to sing whilst tied down by his ankles by Robert Fripp. Still, nice Beatles style harmonies come in later during the song, so that's alright then. The final two songs by pass softly, gently. Inoffensively. The best thing you can say about them is that they are inoffensive. As for 'Islands', it's a complete waste of tape, more or less. The innate talent and vision of Bob Fripp shines through in places, but the album is a mess. Whilst contemporaries of King Crimson, such as Genesis and Yes were getting better and better and better, King Crimson were descending into near total decline. Of course, what happened next was inexcusable! 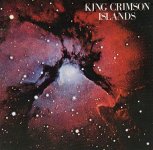 This album was a disappointment compared to the extraordinary quality of earlier work done by the band themselves and compared to the then prevalent albums released by other bands.

This album suffered from the never-ending lineup changes. It is my least-favorite King Crimson album, and was also Fripp’s for a long time. Maybe it still is?
BTW, Robert Fripp couldn’t find both a bass player and a singer, so he himself taught Boz Burrell how to play bass.
Show hidden low quality content
You must log in or register to reply here.
Share:
Facebook Twitter Reddit Pinterest Tumblr WhatsApp Email Share Link
Forum Community