Staff member
'The Great Deceiver' is immense. It's the sound of King Crimson in full effect, the nastiest and most exhilarating they'd sounded since '20 Century Schizoid Man', and in terms of energy, it exceeds even that. This is real jazz-rock fusion, taken to a limit, taken by a band immersed in both music forms but not sure which side of the fence they lay - thus resulting in a perfect meld. Albeit, a perfect meld with punk-rock like energy, plus beautiful passages of string sections and quieter moments. Dynamics! Reading the music press lately, you'd think rock dynamics were invented by either The Pixies or Nirvana. There is much to be found in these unfashionable prog-rock acts with silly hair, that reigned supreme during the early to mid-seventies. Apart from, King Crimson never did reign supreme. Whilst a band like Yes became huge commercially, King Crimson remained a cult, elitist, due to the uncompromising approach of their leader, Robert Fripp. Oh, his guitar all through the later half of 'The Great Deceiver' just destroys me. It's just so wonderful, so spiralling and twisting and doing all sorts of things a guitar shouldn't, whilst the vocalist is bellowing powerfully out. Your attention goes to both - your attention is fully attended! 'Lament' also has some powerful moments, big meaty bass lines, wonderful drumming courtesy of my personal 'dream team' drummer, Bill Bruford.

'We'll Let You Know' is also the name of a Morrissey song. I dedicate the fact that i'm now fully appreciating prog-rock, and not just indie-rock, to one George Starostin, whom i've never name-dropped in a review before, because it's gay to do so, but there you are. Still, after these first three fully interesting and exciting songs, the album loses its way. Of the remaining songs, 'Trio' is quite clearly something that resembles Bob Fripp not knowing how to write actual songs. This is something this reviewer has long suspected. The man has obvious talent, but writing songs isn't one of them. Oh well, there are beautiful sections to 'Trio'. Yet, try playing them on an acoustic guitar. Try letting the structure and the melody hold sway on their own. Try playing the song purely on a flute, or a banjo. Any truly GOOD compostion will withstand any treatment. The beauty of this era of King Crimson is that they'd developed such a good band, the three of them, John Wetton, Bob Fripp and the almighty god-like Bill Bruford. The quality of the band were key - they could improvise. They do an awful lot of that across this album. An album that after the first three songs, does remain interesting, yet lacks structure. There is avant-garde, and art - and then there is pure experimentation. I'm not sure 'Starless And Bible Black' always keeps itself the right side of the line. Having said that, I do like listening to this album, from time to time. Sometimes. 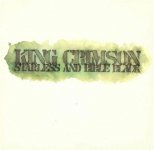