Staff member
Something akin to The ALLMAN BROTHERS in their earliest deep Southern rock incarnation: plaid shirts, drain-pipe jeans, et al, KINGS OF LEON brothers (and cousin) were preacher’s sons on a mission to bring the rock’n’roll gospel to the masses. This was achieved in no small measure when their multi-selling fourth set, `Only By The Night’ (featuring the classic `Sex On Fire’ hit) won awards all over the globe.

Formed in Nashville, Tennessee in 1999 by Talihina, Oklahoma-born brothers Caleb Followill (vocals, rhythm guitar), Jared (bass) and Nathan (drums) – cousin Matthew Followill (lead guitar) was recruited in a matter of months – derived their name from grandfather Leon. After playing as a backing band in churches for their Pentecostal preacher father Ivan Leon Followill, and moving from one trailer park to the next when they were young ‘uns, they decided the best route for their home-grown garage blues was to keep it strictly in the family (yet another cousin is their road manager).

Swinging like The STROKES meeting GRAM PARSONS’ wandering ghost at a LYNYRD SKYNYRD concert, KINGS OF LEON issued their southern fried debut EP `Holy Roller Novocaine’ (featuring the track as addendum to the classic `Molly’s Chambers’) early in 2003. The quartet followed it with a minor UK chart placing a few months later via `Red Morning Light’, both lifted from their ground-breaking Ethan Johns-produced debut set, YOUTH & YOUNG MANHOOD {*8}, a Top 5 in Britain, but stuck in the stalls in America. Thanks to some hype from the NME, etc., their label (HandMeDown) finally launched `Molly’s Chambers’ into the UK charts in its own right and set up a possible challenge to others in the arena-rock mould. Elsewhere on the album, one could hear songs of redemption, cross-dressing cowboys and tequila-stained bed-sheets from a band of ex-religious nuts who had a penchant for the days of NEIL YOUNG and MC5.

The KOL continued to push back the wild frontiers of post-millennial Southern rock on the cryptically named sophomore effort, AHA SHAKE HEARTBREAK (2004 UK/2005 US) {*6}; Caleb sounding even more like a horse-whipped RAY DAVIES than ever. Which is possibly why British fans continued to be more taken with their Muswell Hillboogie than the Americans; the album itself went Top 3 (Top 50 fringes in the US), while singles `The Bucket’, `Four Kicks’ and `King Of The Rodeo’ generated exponential chart returns.

Dusting themselves down somewhat, KINGS OF LEON returned after a wee hiatus and mixed up the medicine once again on album number three, BECAUSE OF THE TIMES (2007) {*6}. Led by the darker, almost prog-like `Knocked Up’ (clocking in at 7 minutes), Caleb’s brooding drawl set the pace for this mature, less pop-rock-orientated set; `On Call’, `Fans’ and to a lesser extent `Charmer’ were all UK hits, while the PIXIES-esque `McFearless’ was just as it was named.
The chart-topping (although Top 5 in the States), ONLY BY THE NIGHT (2008) {*8} pushed their boundaries further afield into radio-friendly, arena/alt-rock territories, Caleb and Co finding themselves at times “under a blood red U2 sky”; example `Crawl’, `Manhattan’ and `Closer’. For many punters though, the classics were uncovered in `Sex On Fire’ and `Use Somebody’.

With much anticipation as they almost overnight became rock & roll darlings, the Followill boys unleashed their fifth album, COME AROUND SUNDOWN (2010) {*5}. Whether they suffered by comparison, the No.1 set lacked the bite and even crunch of any of the predecessors, although there was some light at the end of the tunnel through minor hit `Radioactive’ (very ARCADE FIRE), `The Immortals’ (very U2) and the cool, SPRINGSTEEN-ish `Back Down South’. Pity the poor preacher boys some might say – pity the rich ones too.

Preceded by a couple of near-UK Top 30 singles, `Supersoaker’ and `Wait For Me’, the chart-scaling MECHANICAL BULL (2013) {*8} retraced the Kings’ rollicking, rock’n’roll roots. Probably geared up and primed to become the next hit, the Southern glam of `Don’t Matter’ was another passionate, organic vibe that would show off the power of these bombastic siblings. Although a tad U2 again on `Beautiful War’, Caleb and Co also delivered on the hook line and sinker, `Temple’, `On The Chin’ and the poignantly-titled `Comeback Story’. A magnificent return.

Raking in rather contrariant ratings from the likes of Rolling Stone and the attentive NME (the latter as always in sync with the day’s trends), KINGS OF LEON’s focused seventh set, WALLS (2016) {*8} – aka “We Are Like Love Songs” – was another to confound critics. Chock-full of classic cuts c/o the jangle-tastic and head-spinning `Waste A Moment’, `Reverend’, `Around The World’, `Find Me’ and the SPRINGSTEEN-esque title track, the transatlantic No.1 album had one other trick up their sleeve: their lighter-in-the-dark classic, `Conversation Piece’ – surely a future hit. 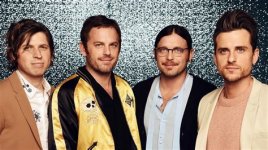