Staff member
In the late 1960s, Led Zeppelin was doomed to fail. As the story goes, the name came from a running joke between the musicians that their band would go down like a lead balloon. In its review of the album Rolling Stone called Jimmy Page "a writer of weak, unimaginative songs." While Rolling Stone is not wrong that this debut record is largely a complete rip-off of a number of blues standards, the album did establish the musical prowess of Page, Robert Plant, John Paul Jones, and John Bonham. That Led Zeppelin went on to become one of the greatest rock bands of all time is a testament to the raw talent brought together in this group.

Track Listing:
Good Times Bad Times
Babe I'm Gonna Leave You
You Shook Me
Dazed And Confused
Your Time Is Gonna Come
Black Mountain Side
Communication Breakdown
I Can't Quit You Babe
How Many More Years 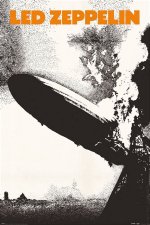