Alongside their Detroit-area brethren the Stooges, MC5 essentially laid the foundations for the emergence of punk; deafeningly loud and uncompromisingly intense, the group's politics were ultimately as crucial as their music, their revolutionary sloganeering and anti-establishment outrage crystallizing the counterculture movement at its most volatile and threatening. Under the guidance of svengali John Sinclair (the infamous founder of the radical White Panther Party), MC5 celebrated the holy trinity of sex, drugs, and rock & roll, their incendiary live sets offering a defiantly bacchanalian counterpoint to the peace-and-love reveries of their hippie contemporaries. Although corporate censorship, label interference, and legal hassles combined to cripple the band's hopes of mainstream notoriety, both their sound and their sensibility remain seminal influences on successive generations of artists.
The Motor City Five formed in Lincoln Park, MI, in late 1964 by vocalist Rob Tyner, guitarists Fred "Sonic" Smith and Wayne Kramer, bassist Pat Burrows, and drummer Bob Gaspar; at the time, its members were still in high school, appearing at local parties and teen hangouts while clad in matching stage uniforms. In time, however, Smith and Kramer began experimenting with feedback and distortion, a development that hastened the exits of Burrows and Gaspar during the fall of 1965; adding bassist Michael Davis and drummer Dennis Thompson a year later, MC5 landed a regular gig at the famed Detroit venue the Grande Ballroom, building a fanatical local fan base on the strength of their increasingly anarchic live appearances. Soon the band caught the attention of Sinclair, a former high school English teacher anointed the Motor City's "King of the Hippies" after founding Trans Love Energies, the umbrella name applied to the many underground enterprises he operated, including his White Panther Party, a radical political faction espousing "total assault on the culture by any means necessary, including rock & roll, dope, and f*cking in the streets."

In early 1967, Sinclair was named MC5's manager; within months they issued their debut single, "I Can Only Give You Everything." As the official house band of the White Panthers, they became musical conduits for the party's political rhetoric, taking the stage draped in American flags and calling for a revolution; run-ins with the law became increasingly common, although in the wake of the Detroit riots of July 1967, the group relocated to the nearby college town of Ann Arbor. The following summer, MC5 appeared in Chicago at the Yippies' Festival of Life, a rally mounted in opposition to the Democratic National Convention, and in the audience was Elektra Records A&R executive Danny Fields, who signed the band a few months later. Their debut album, the classic Kick Out the Jams, was recorded live at the Grande Ballroom on October 30 and 31, 1968; although the album reached the national Top 30, retailers, including the Hudson's chain, refused to carry copies due to its inclusion of Tyner's trademark battle cry of "Kick out the jams, motherf*ckers!" The controversy spurred MC5 to run advertisements in the underground press reading "F*ck Hudson's!" Against the band's wishes, Elektra also issued a censored version of the album, replacing the offending expletive with "brothers and sisters."

When the dust settled, MC5 was dropped by Elektra; when Sinclair was subsequently jailed for possession of marijuana, the band was left without their manager and without a contract. They signed to Atlantic, where producer Jon Landau was installed to helm their second album, 1970's Back in the U.S.A.; with Sinclair out of the picture, the music's political stance vanished as well, with a newly stripped-down, razor-sharp sound replacing the feedback-driven fury of before. The record's approach divided fans and critics, however, and when the 1971 follow-up High Time failed to even reach the charts, Atlantic released MC5 from their contract; in addition to filing for bankruptcy, the group was dogged by mounting drug problems and in early 1972, Davis was dismissed from the lineup as a result of heroin abuse. Bassist Steve Moorhouse stepped in as his replacement, but soon after, both Tyner and Thompson announced their retirement from active touring; on New Year's Eve of 1972, the group played their final gig, appearing at the Grande Ballroom -- the site of so many past glories -- for just 500 dollars.

As the years went by, however, MC5's influence expanded; punk, hard rock, and power pop all clearly reflected the band's impact and by the 1990s, they were the subject of a steady stream of reissues and rarities packages. Following the band's demise, its members pursued new projects: Tyner released several solo records and also earned acclaim for his photography before suffering a fatal heart attack on September 17, 1991. Smith, meanwhile, formed Sonic's Rendezvous with fellow Detroit music legend Scott Morgan, issuing the underground classic "City Slang" in 1977 before leaving the group; in 1980 he wed Patti Smith, dying of heart failure on November 4, 1994. After spending much of the following decades battling drug addiction -- including a two-year prison stint -- Kramer resurfaced in 1995 with a blistering solo album, The Hard Stuff, the first of several new efforts for punk label Epitaph. Less successful were Davis, who seemingly disappeared from sight after a tenure with underground legends Destroy All Monsters (he died of liver failure on February 17, 2012 at the age of 68), and Thompson, whose solo ambitions went largely unrealized 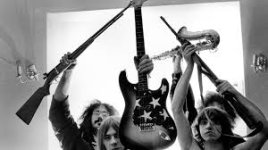 My absolute fav song by the boyZ

Just read this....Wayne Kramer & MC 5 will release a new album after 50 years !!!! The album will include Tom Morello (RATM) among others .....including Bob Ezrin !!