Staff member
When RADIOHEAD embraced their experimental electronica panache full-throttle on post-millennial noodler, “Kid A”, little did THOM YORKE and Co know that they’d left in their wake a number of combos ready and willing to fill their post-Britpop void. Armed with a neo-prog-rock sensibility and a singer/guitarist (Matthew Bellamy) that could’ve given showman FREDDIE MERCURY a run for his operatic money, spearheading the mini musical revolt was MUSE. An English group now several soaring sets into their career, they’ve thankfully lost the RADIOHEAD tag, only to replace it with a polished funky QUEEN on a fantasy-“Phantom-Of-The-Opera”-vision.

Formed in Teignmouth, Devon, one could trace MUSE back to 1994, when both drummer Dominic Howard and the aforementioned songsmith Bellamy ran through a gamut of group monikers such as Gothic Plague, Fixed Penalty, Rocket Baby Dolls (the latter winners of a local battle of the bands). With former sticksman-cum-bassist Chris Wolstenholme in tow, Carnage Mayhem, was abandoned for the simplicity of the name MUSE. After putting university aspirations to one side and playing dingy dives and damp basements, the 3-piece from the south west arose when they debuted at the “In The City” A&R field day in 1998; their first proper gigs was as support to SKUNK ANANSIE.

With help from Dennis Smith, an acquaintance of their parents who had converted a studio in Cornwall, a production company was also set up for the trio with future manager Safta Jaffery.

Still only 19 years of age, the indie kids released a Paul Reeve co-produced EP entitled `Muse’, that May, limited to pressings of just under a 1,000 copies it can nowadays fetch around £300. The EP sounded like many earlier RADIOHEAD efforts, with a little MY BLOODY VALENTINE twist thrown in for good measure, while three of the tracks (`Overdue’, `Cave’ and `Escape’) found their way on to MUSE’s debut set. Encouraged by the reaction of people-in-the-know, MUSE proceeded with the `Muscle Museum’ EP (their second from the Sawmills Studios for Dangerous Records), which underlined their strengths by way of further debut album delights, `Sober’, `Uno’ and `Unintended’.

Bellamy’s THOM YORKE-esque vox impressed record pedallers, so much so, that they took the group to America to showcase them for MADONNA’s Maverick imprint (home to DEFTONES, ALANIS MORISSETTE, et al). Two subsequent singles, `Uno’ and `Cave’, hit a UK minor chart placing before the unveiling of their debut set, SHOWBIZ (1999) {*7}. The John Leckie-produced album boasted nothing new (bar say… the opening track `Sunburn’, and other hits, `Muscle Museum’ and `Unintended’), except that it may have contained some of the most melodramatic tracks since MANSUN’s “Attack Of The Grey Lantern” or dare one say it, RADIOHEAD’s “OK Computer”. The record unleashed a new brand of genre that had the same ideology as Britpop: MOR – where-have-I-heard-this-before? – rock.
2001 saw MUSE go from strength to strength via two major hit singles, `Plug In Baby’ and `New Born’, both taken from their celebrated Top 3 sophomore set, ORIGIN OF SYMMETRY {*9}. A sound of monolithic proportions, with production and Matt’s vocal gymnastics almost claustrophobic and visceral, fans were in for “a night at the rock opera” courtesy of OTT ouvertures and Bellamy’s bombastic shrills on further chart jewels, `Bliss’ and `Hyper Music’; the latter a double-header flipped with former nostalgic/NINA SIMONE number, `Feeling Good’.

Signed to East West/Warners, Bellamy and Co returned once again in September 2003 with chart-topper, ABSOLUTION {*8}, a jaded, spiky rock affair that bore all of the usual MUSE trademarks, but this time with a change of production (Rich Costey replaced regular Leckie). In turn, the set proved to be more clean-cut, but all of the recognisable traits still remained in the band’s (sometimes angular) agit – Bellamy’s soaring falsetto at the forefront of the gloomy, doom-laden music. Drawing in “Muse-os” from both the NME and Kerrang!, the set teetered between RADIOHEAD, QUEEN, MY BLOODY VALENTINE (on the “interlude” and “intro”) and classical composer PHILIP GLASS, the latter’s wayward analogy down to finale piece, `Ruled By Secrecy’ (and `The Small Print’). An album authored by the group rather than Bellamy himself, the four Top 20 hits were of the top drawer: `Time Is Running Out’, `Hysteria’, `Sing For Absolution’ and `Butterflies & Hurricanes’.

When “Absolution” bubbled under the US Top 100, it left a door open for the trio’s next sojourn into sonic symphonic prog. For three years their loyal fanbase were left out in the COLDPLAY, but with the classicist set, BLACK HOLE & REVELATIONS (2006) {*8}, one could hardly accuse them of being mere sound plagiarists – if one could forgive them for subliminally procuring pieces of ERIC MATTHEWS’ “Faith To Clay” on `City Of Delusion’, MIDGE URE for `Starlight’ and JOE MEEK for the 6-minute `Knights Of Cydonia’. Still, as a sprawling package of anthems and er… “Absolutions”, the high!-and-mighty `Supermassive Black Hole’ and the grinding theatrics of `Assassin’ were worthy of the admission price. While `Invincible’ also provided a bit of where-have-we-heard-this-one-before aspect, the U2-esque `Map Of The Problematique’, joined up the dots.

Introduced by Prokofiev’s “Dance Of The Knights”, the Live from Wembley audio/visual extravaganza of HAARP (2008) {*6} solidified MUSE’s worth on Planet Earth. Taking faves from a decade of fortune and finery, 2009’s THE RESISTANCE {*7} was again balancing the group between alt-pop and neo-prog. Chart-topping in Britain (as standard) and Top 3 over the big pond, one could at least cherry-pick between a gamut of styles that encompassed the usual suspects, plus a few incorporated dance-styled croons from the multi-talented Bellamy. From the glam-meets-80s `Uprising’, to the self-explanatory `Exogenesis: Symphony Parts 1-3’, MUSE acolytes could have it all under one roof.

THE 2ND LAW (2012) {*6} pushed these neo-prog/trip-hop boundaries a tad too far, exampled on the INXS-esque cousin of “Supermassive”: `Panic Station’, or the GEORGE MICHAEL-like `Madness’. For the first time, Wolstenholme was solely responsible for two songs, `Save Me’ and the QOTSA-ish `Liquid State’, although the mastery of Matt was intense and indulgent on opener `Supremacy’ and London Olympics anthem, `Survival’. While it would almost commercial suicidal to emerge as a group ready to embrace one direction rather that the other, if MUSE stuck to “The 2nd Law” finale-styled outings such as `Unsustainable’ and `Isolated System’, there’d be work on the soundtrack circuit – or is that a lot of “Hullabaloo”? In the meantime, fans had to make do with par-for-course concert CD/DVD package LIVE AT ROME OLYMPIC STADIUM (2013) {*7}.

Opening a Pandora’s Box of political motifs and statements concerning the dehumanization of modern-day warfare (as perfectly put by AMG), 2015’s DRONES {*7} was held together by a hard-rock flow conducted by producer Mutt Lange. Towering tornados of machine-gun fire-power on `Dead Inside’, the MARILYN MANSON-beat-en `Psycho’ and `The Handler’ were matched by the neo-operatic antics of Bellamy, while the combination of both QUEEN and prog-rock soared heavenly on `Defector’. Interspersed throughout by a few PINK FLOYD-ian “Wall”-like snippets, the chart-scaling album was a grandiose affair topped by the sprawling prog dreamscape/nightmare of the part-RADIOHEAD/part-headbanging – partly Elgar’s “Nimrod”-sampled – epic, `The Globalist’ (the sequel to `Citizen Erased’).
Dispensing with the dystopian destiny of the drone, and on to the meeting of a matrix and the human resolve, the ambitious UK chart-topping SIMULATION THEORY (2018) {*6} was MUSE’s conceptual rage against the machine. Soaring higher than any nosey drone, the opening three cuts (`Algorithm’, `The Dark Side’ and the operatic `Pressure’) combine a neon-classical/neo-prog sheen, if not caught between The DARKNESS-rock and a hard place. Whilst one might recognise the “don’t push me” sing-a-long aspect on the latter track from countless TV inter-ads, Matt’s PRINCE-like/TIMBALAND-addled `Propaganda’ and the pseudo-rapping on `Break It To Me’, would’ve been better suited for other pop/rock projects. As for the “A Little Respect”-meets-“She’s The One”-esque, `Something Human’, well that was one for the part-plagiarist conspiracy theorists. To summarize the record from beginning to end: after a sonically-charged first half, the cosmic second half somehow managed to drive itself into a big black hole. 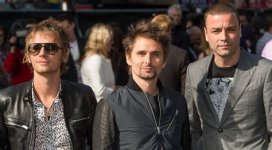