Staff member
OCEAN COLOUR SCENE competed with buddies OASIS (and hero PAUL WELLER) for the mid-to-late-90s Britpop crown. While critics could draw a line through SMALL FACES, TRAFFIC and the aforementioned Gallagher siblings, OCS had a certain panache all of their own, and a couple of the best songs around in `The Riverboat Song’ and `The Day We Caught The Train’.

Formed in the Moseley area of Birmingham, England, mid-1989, out of The Fanatics (who’d released the `Suburban Love Songs’ EP for the Chapter 22 imprint), vocalist/guitarist Simon Fowler, bassist Damon Minchella and drummer Oscar Harrison left behind Paul Wilkes, opting instead for former Boys guitarist Steve Cradock. In the summer of 1990, OCEAN COLOUR SCENE found manager John Mostyn, who, in turn, signed them to his new Phffft stable.

A debut 45, `Sway’, helped secure a joint venture with Phonogram for follow-up, `Yesterday Today’. The latter track breeched the Top 50 in March ‘91, and, just when it seemed as if a breakthrough was imminent, Phffft was sold off during the recording of their proposed Jimmy Miller-produced debut album. Now on Fontana Records, timing and momentum was lost as they re-recorded the whole project with various producers; Tim Palmer, Steve Osborne and Hugo Nicholson, all roped in to oversee the ailing project. A re-vamped re-issue of `Sway’ and a follow-up, `Giving It All Away’ (with backing vox from ALISON MOYET), virtually sank into a sea of “Madchester” mania.

April ’92 finally witnessed the release of their eponymous OCEAN COLOUR SCENE {*5} set, although it brought criticism for its over-cooked production. Despite lyricist Fowler and the group’s best songs being watered-down (including `Justine’ and `Penny Pinching Rainy Heaven Days’) and, after a version of STEVIE WONDER & SYREETA’s `Do Yourself A Favour’ dive-bombed, the group subsequently found themselves on the dole without a recording contract and up to their necks in debt. Helped out by lawyer Michael Thomas, the band were successful in persuading Fontana’s Dave Bates to waive the million they were reputedly still owing.

OCS emerged once again with a support slot to their newfound mate and confidante, PAUL WELLER; both Fowler and Cradock picking up some needed readies in guesting on his autumn ‘93 classic “Wild Wood” set; from that day on, Cradock subsequently became an integral part of the Modfather’s backing band. Meanwhile, in the summer of ‘94, OCEAN COLOUR SCENE supported OASIS and completed a Fontana Records tour of the States, supporting HOUSE OF LOVE and The CATHERINE WHEEL. A year later, all group members played for WELLER at some point; with Cradock and Minchella guesting on his chart-scaling album, “Stanley Road”. 1995 also saw the band recording their long-awaited follow-up album, having earlier signed to M.C.A.

Early in ‘96 (with PW on organ), OCEAN COLOUR SCENE scored their first of many Top 20 hits by way of `The Riverboat Song’; later chosen for DJ Chris Evans’ TFI Friday Show theme song. Dropping the indie-dance trappings of old, OCS adopted a heavier, funkier, white-soul sound and a retro/mod image to boot, in turn, dominating the charts in the wake of WELLER’s massively successful return to a rootsier sound. Despite its title, `You’ve Got It Bad’, fared even better, tracked as it was by their Brendan Lynch-produced album, MOSELEY SHOALS (1996) {*8} – a pun on the Muscle Shoals studio in faraway Alabama – which hit the Top 3. The record inevitably featured WELLER on a few other tracks and the man augmented the group on a “Later With Jools Holland” TV spot. Two further Top 10 smashes, `The Day We Caught The Train’ (their classiest so far) and `The Circle’ were called-up from the album, while a charting odds ’n’ sods collection of “B-Sides, Seasides & Freerides” showed just how far OCS had come in the previous couple of years.

A couple of Top 5 hits, `Hundred Mile High City’ and `Traveller’s Tune’, preceded an autumn ’97-chart-topping album, MARCHIN’ ALREADY {*7}, a formulaic but necessary work that had critics, and even NOEL GALLAGHER searching for appropriate praises. As `Better Day’ and `It’s A Beautiful Thing’ raised their chart profile higher, Noel sent Cradock and Co a plaque inscribed with “to the second best band in Britain”, to which tongue-in-cheek Steve concurred that he was honoured to be judged so highly – next to The BEATLES!

In the days to come it seemed OCS were an easy target for more serious critics, and it was up for question whether the band’s retro-lite and almost wholly teenage audience would stay the course. As Island Records took over the reins, ONE FROM THE MODERN (1999) {*6}, was the next Top 5 album on the retro production line; the band defiantly standing by their “dad rock” roots, while opener and hit single, `Profit In Peace’, showed they were a caring type of band. `So Low’ and the double-A sided `I Am The News’ and `July’, bubbled outside the Top 30 and it looked like barbed comments from reviewers from The Herald and The Independent – Simon described as having “strangled” or “mangled” vocals – had done their trick.

Yet one suspected that while there was still an audience for OASIS there would still be an audience for OCEAN COLOUR SCENE, so indistinguishable were their respective markets. No surprise then that the admittedly fairly intoxicating `Up On The Downside’ single dented the Top 20, pushing the rather more workmanlike MECHANICAL WONDER (2001) {*5} album into the Top 10. After ending the year with the obligatory festive-period Top 20 compilation, SONGS FROM THE FRONT ROW – THE BEST OF OCEAN COLOUR SCENE {*8}, it was indeed their farewell from Island.

While the release of a new OCS album was hardly the news that it once was, and sticking with producer Martin “Max” Hayes, NORTH ATLANTIC DRIFT (2003) {*5} – their first for Sanctuary Records – demonstrated that they were at least consistent in their hard-graft, no-nonsense rock. While not exactly a departure, the Top 20 album (and attendant hits, `I Just Needed Myself’, `Make The Deal’ and `Golden Gate Bridge’) was a far less oppressive listen than its predecessor, perhaps signalling that they’d grown content in their middle age. The American version was complemented by a rendition of RICHARD & LINDA THOMPSON’s `I Wanna See The Bright Lights Tonight’; incidentally, over the years they’d covered `Day Tripper’ (The BEATLES), `Anyway Anyhow Anywhere’ (The WHO), `On The Way Home’ (NEIL YOUNG) and `St. Cecilia’ (SIMON & GARFUNKEL).

Subsequent live set, ONE FOR THE ROAD (2004) {*5}, said exactly what it said on the tin, and marked time until the release of a fresh batch with newcomers Andy Bennett and Dan Sealey, who’d replaced Minchella.

Their seventh studio long-player and Top 30 breaker, A HYPERACTIVE WORKOUT FOR THE FLYING SQUAD (2005) {*5}, was classicist rock at its funky best, reminiscent of 70s stalwarts TRAFFIC or HUMBLE PIE, and recorded in the wilds of Glenrothes and Kirriemuir in Scotland. Augmented by Anthony and Chris Griffiths of The REAL PEOPLE on `Start Of The Day’, and fitting in a cover of GEORGE HARRISON’s `Wah Wah’, fans who guaranteed a Top 30 spot for `Free My Name’, were more than happy that their band had not given up the ghost just yet.

LIVE ACOUSTIC at THE JAM HOUSE (2006) {*5} was an addition to their catalogue, featuring four new songs but none of their early classics. Inevitably, it was down to their own Moseley Shoals label to deliver anything forthcoming and, while `I Told You So’ and parent set, ON THE LEYLINE (2007) {*4} reached Top 30 status, the set itself bore little fruits, despite the WELLER contribution, `For Dancers Only’.

On the back of an average STEVE CRADOCK album, THE KUNDALINI TARGET (2009) {*4}, OCEAN COLOUR SCENE injected a bit of life into their flagging career by signing to former folk outlet, Cooking Vinyl. Both 2010’s SATURDAY {*5} and 2013’s PAINTING {*5}, couldn’t quite return them to the halcyon days of old, but they’d enough support to see them through these tough times; best tracks from the latter: `I Don’t Want To Leave England’, `The Winning Side’ and `If God Made Everyone’. 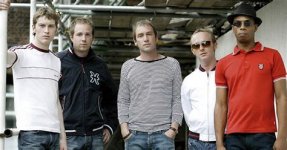