Staff member
There are moments in the history of music where the stars just align; rare moments where the outcome of seemingly dissimilar people is magical. Actually, there aren’t many words more suitable than “magic” when it comes to Rainbow’s sophomore effort. Rising is where power metal was born and heavy metal was redefined, where simple words created such a vivid imagery which led to an epic offering that had no precedent. Up to that point, heavy (or proto-heavy) metal revolved mainly around either dark themes from Black Sabbath or more ordinary material coming from the likes of Deep Purple and Led Zeppelin. Of course, Uriah Heep and Wishbone Ash, among others, had shown the way with Demons and Wizards and Argus respectively, but both albums had a different direction than Rising as they were more hard rock-oriented.

One interesting fact is that Rising took less than a month to be recorded which is a testament to the chemistry but also to the clear vision and hierarchy within the band; Ritchie Blackmore was responsible for the music and Ronnie James Dio wrote the lyrics based on the melodies. In fact, an important element of Dio’s lyrics that is worth mentioning is the selection of words and his clear delivery. A prime example can be found towards the end of “Stargazer” from the “Time is standing still” verse onwards. For a non-English speaker, this makes a world of a difference as it allows the listener to bond with the music on a deeper level. This also sheds some light on the fact that most European power metal bands that flourished in the mid-‘90s consider this LP a huge influence; these guys were impressionable teens back in 1976. In addition, the lyrics of the album’s centerpiece constitute a prime example of the seemingly cheesy power metal subject matter which, if examined more thoroughly, isn’t so cheesy after all. To be more specific, the song portrays – through the eyes of a slave – a wizard who is obsessed with flying and for that reason deploys an army of slaves who build a tower of stone. However, looking more between the lines, one can see hubris and the influence of the powerful on the weak.

Coming back to the stars alignment, we cannot disregard that Rainbow was practically a band consisting of not just all-star players but hall of famers with arguably GOAT status with one distinctive difference; Dio and Powell were at the start of their careers, therefore their statuses and consequently egos were such that allowed them to coexist with genius/control freak Blackmore. Dio’s known resume at that time included Elf (and Rainbow’s debut of course) while Powell had experience working with another genius in Jeff Beck. As much as Rainbow was Blackmore’s vision, Rising wouldn’t be possible without Cozy Powell's thunderous drumming who employed a different approach than that of Ian Paice with whom Blackmore had worked with in Deep Purple. Cozy brought a more hard-hitting, power playing than Paice – an incredible rhythm drummer – either accenting perfectly Blackmore’s riffs (“Stargazer”) or complementing them (“A Light in the Black”).

Looking for weak point on Rising isn’t an exercise in futility. Some may point out that Rising’s duration is too limited and that the album is quite uneven. Even though both might be valid arguments, it is the sheer quality of Side 2 that may give such an impression. I cannot imagine the impact that “Stargazer” had at the time but this is one of those songs that you probably remember the first time you heard and for a good reason; the simple yet effective and atmospheric riff, Dio’s amazing performance and the addition of orchestra are the very definition of “epic”. “A Light in the Black”, the fastest song of the album, is actually “Stargazer’s” continuation and describes the slave’s thoughts after being released by the wizard’s death while bringing Powell’s ferocious drumming to the forefront. However, Side 1 of the LP is quite impeccable as opener “Tarot Woman” sets the mood perfectly with its otherworldly synth intro (an impromptu contribution by Tony Carey) that draws the listener into a misty forest full of mysterious passages with unexpected twists and turns created by Carey's keys. What is more, even the weakest track of the album "Do You Close Your Eyes" features a very infectious vocal line just before the chorus.

Lastly, as evident from the band’s debut, Blackmore’s playing is different here than on Deep Purple, as it is less aggressive and wild but still very effective. His (underrated) riffs are memorable and his solos, as always, fit the songs perfectly while creating highlights within highlights. The cover art fits the musical offering like a glove and those who decide to check the Los Angeles Mix of the album will find that Jimmy Bain can deliver some rather nice bass lines. Yes, the album could have been longer but the combination of emotion, power and the qualities that each member brought to the band make Rising a monument of hard rock.

2. Run With the Wolf

4. Do You Close Your Eyes 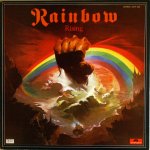