Staff member
The Emerald Isle’s greatest guitarist of all time, iconic figure RORY GALLAGHER – complete with lumberjack shirt, jeans and ruffled shoulder-length locks – led the way in post-HENDRIX axeman artistry. Worshipping at the altar of blues KING’s (B.B., Freddie and Albert), Rory G was celebrated by fans on both sides of the Irish sea for his musical integrity and down-to-earth approach. Also initially inspired by CHUCK BERRY, ERIC CLAPTON, and a rocky mountain full of first generation bluesmen, spearheaded by MUDDY WATERS, JOHN LEE HOOKER and ELMORE JAMES, Rory was the working man’s guitarist – an idol for the people, cut short by his untimely death in June 1995. However, the spirit of the Irishman was, in essence, never “A Million Miles Away” from his many loyal fans.

Born 2nd March 1948 in Ballyshannon, County Donegal, but raised shortly after his birth in the southern city of Cork, Rory first performed in various school bands, experience that subsequently led the suited-and-booted young gent to form The Fontana Showband, and in turn, The Impact. By 1965, the group had secured residencies in Hamburg, Germany, mostly playing CHUCK BERRY songs to post-Fab Four audiences; Rory was also adept at playing sax, mandolin and harmonica.
Fast forward a year, just as the British blues revival was gathering steam, Gallagher formed The TASTE, with drummer Norman Damery and bassist Eric

Kitteringham. The Irish equivalent to CREAM, the focus was centred on precocious teenage writing talent Gallagher, a lad outstanding on the band’s debut 45 for Major Minor Records: `Blister On The Moon’. Re-promoting its flipside, `Born On The Wrong Side Of Time’ to an A-side, Polydor gave full support to Rory’s all-new backers – drummer John Wilson (from THEM) and bassist Richard McCracken – on the power-trio’s eponymous parent LP.

On the back of tours in support of BLIND FAITH and DELANEY AND BONNIE, 1970 saw the man hit the UK Top 20 with follow-up set, `On The Boards’. The record established GALLAGHER as Ireland’s ambassador of the blues guitar, setting the stage for swansong set, `Live Taste’ (1971), another Top 20 breaker that did little more than showcase longer versions of his best cuts. Recorded at the Montreux Casino in Switzerland, the LP has often been confused with the similarly-tracked post-TASTE exploitation record, `Live At The Isle Of Wight’ (1972); also from 1970 and said to be all the better for having their equipment stolen.

With TASTE in the midst of financial and management problems, and serving no purpose to a man on a mission to play guitar no matter the cost to his body and soul, his self-titled RORY GALLAGHER {*7} debut solo set appeared in May 1971; the record selling enough initial copies to give it a Top 40 placing. Augmented by Gerry McAvoy (bass) and Wilgar Campbell (drums) – with ATOMIC ROOSTER’s keyboardist Vincent Crane popping up on a few cues (`Wave Myself Goodbye’ and `I’m Surprised’) – nu-blues acolytes were best served by `Laundromat’, `Sinner Boy’ and `Hands Up’.

After a second blistering self-penned studio set, DEUCE (1971) {*8}, highlighting the excellent `Crest Of A Wave’, `Used To Be’ and the countri-fied `Don’t Know Where I’m Going’, Rory, in effect, delivered yet another worthy concert album, LIVE! IN EUROPE (1972) {*8} – his third in 12 months! Marked by solid versions of normally trad/sourced numbers such as `I Could’ve Had Religion’, `Messin’ With The Kid’ and `Bullfrog Blues’, it was resident in the UK charts for months, while peaking at No.9.

Released on either side of his involvement in a couple of all-star “London Sessions” sets for both MUDDY WATERS and JERRY LEE LEWIS, chart albums BLUEPRINT (1972) {*7} and TATTOO (1973) {*7} stood among the Irishman’s most engaging albums, and introduced Campbell’s replacement(s), drummer Rod de’Ath and keyboard player Lou Martin (both ex-Killing Floor). Of the first of these, `Walk On Hot Coals’, `Seventh Son Of The Seventh Son’ and a re-tread of BIG BILL BROONZY’s `Banker’s Blues’, were probably the most adventurous in among the stomping boogie blues tunes on parade, while `Tattoo’d Lady’, `Cradle Rock’, `Who’s That Coming?’ and `A Million Miles Away’, stoked up the fire of the latter set.

To coincide with the projected premier of Tony Palmer’s in-concert rockumentary, GALLAGHER released yet another live set, the electrifying double set IRISH TOUR ’74 {*9}. Plucked from highlights during his 2-and-½-hour shows and marrying a batch of his own-penned emeralds (a 9-minute `A Million Miles Away’ the star track), to a string of covers from the likes of MUDDY WATERS (`I Wonder Who’), J.B. HUTTO (`Too Much Alcohol’) and TONY JOE WHITE (`As The Crow Flies’), Rory was now regarded as his country’s biggest attraction.

A switch to Chrysalis Records – home to rival ROBIN TROWER – proved to be ill-advised. GALLAGHER’s form slumped slightly just as the new, leaner breed of guitar acts were coming up through the ranks, while his commercial appeal subsiding under this pressure with each successive release. Featuring no less than three cover versions from SAM AND DAVE (`I Take What I Want’), LEADBELLY (`Out On The Western Plain’) and Bart Davenport (`All Around Man’), his own compositions such as the rollicking `Souped-Up Ford’ got lost in the melee of flop album, AGAINST THE GRAIN (1975) {*6}. As CALLING CARD (1976) {*7} suffered much the same fate, it was time for the man to find a fresh drummer.

With former ALEX HARVEY sidekick, Ted McKenna (McAvoy was still in tow), PHOTO-FINISH (1978) {*5} and TOP PRIORITY (1979) {*5} showed signs that Rory was running out of ideas to keep his blues alive and kicking among the booming new wave stars of the day. In comparison with the growling man’s previous live double-document, Top 40 single-disc STAGE STRUCK (1980) {*5} was basically Rory – a lover of crime fiction – going through the motion as his fighter-pilot-styled rhythms were being shot down by the critics.

Recorded at Dierks Studios in Cologne, Germany a year prior to its release, JINX (1982) {*6} was something of an improvement; `Big Guns’, `Bourbon’ and a re-vamp of LOUISIANA RED’s `Ride On Red, Ride On’, delighting his fans, if no one else. Brendan O’Neill had filled McKenna’s vacant berth, while former BRINSLEY SCHWARZ and GRAHAM PARKER cohort, Bob Andrews, played a guest keyboard support role. His final album of the 80s, DEFENDER (1987) {*6}, played to the rock gallery; best example the great `Kickback City’, although his deep Chicago-styled blues and boogie were still in tact through `Loanshark Blues’ and `Continental Op (To Dashiell Hammet)’. Despite the record’s lack of commercial success, Rory continued to record some worthwhile material and perform live for a hardcore following; 1990’s FRESH EVIDENCE {*6} – highlighting a version of SON HOUSE’s `Empire State Express’ – taking him into a new decade; he’d also added John Cooke (keyboards) to the band.

Persevering with the rock industry as the 90s flowed on, a fresh set of disciples were found in harmonica man Mark Feltham (ex-NINE BELOW ZERO), David Levy (bass), Richard Newman (drums) and Cooke and Jim Levaton (keyboards), but recordings proved fruitless, as Rory’s fear of flying phobia led him further down the rocky road of booze and medication. For years GALLAGHER could drink many a hardy rock star under the table, and death was the only thing that could prise the man away from his trusty Strat; the Irishman passing away in a London hospital on 14th June 1995 after suffering complications from a liver transplant operation.
While many tributes and accolades have since come Rory’s way, there was no better an honour when a statue of the man – and his Fender! – was unveiled in Ballyshannon on the 2nd June 2010; Of late, October 2013 saw the release of a 3-cd compilation, “Kickback City”, the third disc a spoken-word novella, The Lie Factory, by author and fan Ian Rankin. 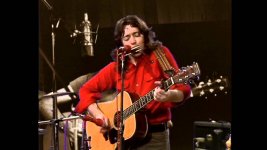 Staff member
Gallagher's second solo studio album was probably about his best in my opinion, probably the best rock blues guitarist of all time also in my opinion who inspired loads of current guitarists like slash.