Staff member
From the beginning, you can tell that Rush has changed a lot. Drums start off the hard-rocking Animate, along with a throbbing bassline and a meandering guitar/synth line. It's obvious that Rush has become much more aggressive than they have been in the past, partially due to the fact that some traces of the grunge movement made their way on here. Overall, "Animate" is a great way to start off any album, and a Rush album is no exception. Next is one of the darkest Rush songs I've ever heard, Stick it Out. Driven by heavy guitar/feedback in the intro and some dissonant chords as it builds up, the song moves seamlessly into a chorus with a chunky bass/guitar lick. Essentially, if Rush made a grunge album, it would be full of songs like this -- heavy, but with multiple sections and a good (albiet short) Lifeson guitar solo. Now that the boys from Toronto have set up the general sound, it's time to move on deeper into the album.

Cut to the Chase is probably on my top 5 of all-time favorite Rush songs. Starting off with a wandering, clean guitar line, the song explodes into the chorus, with everyone playing at their loudest. Lifeson's guitar is perfectly balanced, and Geddy's bass complements the music as well as always. It goes without mention that Peart's drumming is spot-on throughout the song. Again, Lifeson goes into a lightning fast solo, but it's over much too quickly. Structurally it's quite a simple song, but its a great soft verse to rocking chorus type song that almost anyone, prog fan or not, could get into. Next, for me, is the low point of the album, Nobody's Hero. Throughout the song, there seems to be a confusion between the lyrics and the music. Both are adequate on their own, but together, they almost seem forced. However, this is one of the only songs on my WMP I regularly skip.

Between Sun & Moon took me a while to appreciate. Once again,Rush is able to make an oddly syncopated beat quite catchy. While not like something you'd expect to hear on the radio, it's surprisingly accessible. I must say that the chorus is different, with almost a tribal-drum section coupled with a progressive section. There is a quasi-solo that sounds more like a bridge, but Lifeson's riff is pretty
strong there, as well. Alien Shore has one of the strongest intros on the album. Odd timing on the drums and a driving riff give way to an airy verse with loose arpegios. I'll also say that this one goes on a bit too long for me. I'm usually a fan of long songs ("Camera Eye," anyone"), but the same motifs keep being repeated for too long in this one.

Next is probably the most 'chill' song on the album, The Speed of Love. I'll admit it's a bit cheesy for a Rush song, but they're allowed that every once in a while. Overall, instrumentation on this song is pretty loose, with spacey guitar and relatively simple bass and drums. If there's filler on here, I would give that to this song. Next is the...odd song of the album, Double Agent. Switching between spoken-vocal verses, harsh, dissonant odd-metered sections, and light bits, this song is quite a hodgepodge of styles. It is often debated about; some love it and some hate it. I'm still somewhere in the middle.

Now it's time for the instrumental of the album, Leave That Thing Alone. This is another more chill song, letting alight, distant guitar riff take charge, while the others fill in during the 'verse' of the song. While it isn't a "YYZ," the fills and general feel are still good. After this is another upbeat song, the radio-friendly Cold Fire. However, catchy riffs and nice, tight vocals don't make this a bad song. Harmonies are together, and as always, the instrumentation is top-notch. Again, too, Rush is doing the quiet verse-loud chorus thing a lot on this one. My only complaint is that there isn't a real solo on here. Last is Everyday Glory. While not my favorite song, it is still pretty strong as an album closer. I like the texture of vocals, light synth, and acoustic/electric guitars on the chorus, myself.

As always, Rush are amazing songwriters and instrumentalists on this album. Though often overlooked, Counterparts is a great Rush abum to just sit back to and listen to. It does have its shortcomings -- few guitar solos that are too short when they do occur, monotony on a song or two, and the occasional cheesy lyrics. That's why though I rate Counterparts a 4.5 on my personal scale, I only give it a 3.5 overall. 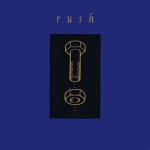