Raised in the Black Country area of the West Midlands, SLADE were formed in 1964 as The Vendors, by guitarist Dave Hill and drummer Don Powell (vocalist John Howells, bassist Dave “Cass” Jones, plus second guitarist Mick Marson made up the numbers), and like many other combos in Old Blighty, American blues was their sound of choice. 1965 saw their first moniker change when they metamorphosed into The In-Betweens, but after a couple of French-only EPs, Hill and Powell were left holding the proverbial baby as the others bailed out one by one.

An acquaintance of the pair, former Steve Brett & The Mavericks singer Noddy Holder, whom they’d befriended from their time spent on a ferry trip while in Germany, was finally available to join up; 16-year-old talent Jim Lea (on bass) was duly added to the revised N’ Betweens 4-piece.
The group’s official UK debut 45, `You Better Run’ (authored by KIM FOWLEY), picked up sales locally but flopped nationwide when released by Columbia Records in late ‘66.

Choosing to concentrate on working the live circuit as an R&B/Motown type band, centred around their base in Wolverhampton, the group were spotted by local promoter, Roger Allen. At the suggestion of Fontana label’s A&R head, Jack Baverstock (said to be inspired by his secretary’s Ambrose handbag and her Slade shoes), the name of AMBROSE SLADE was selected. Featuring only a handful of group-penned cues, including instrumental single flop, `Genesis’, BEGINNINGS (1969) {*5} was down to tasteful/Pick Of The Pops-type covers. Post-psychedelia for the most part, the team’s renditions of STEPPENWOLF’s `Born To Be Wild’ (and `Everybody’s Next One’), The AMBOY DUKES’ `Journey To The Center Of My Mind’ and FRANK ZAPPA’s `Ain’t Got No Heart’, were indeed “Ballzy” (its US title), while The IDLE RACE’s `Knocking Nails Into My House’ and The MOODY BLUES’ `Fly Me High’ were sourced locally; others were harvested from MARVIN GAYE (`If This World Were Mine’) and The BEATLES (`Martha My Dear’).

Former ANIMALS bass player Chas Chandler (the man who’d helped bring JIMI HENDRIX into Britain) was impressed enough to duly offer his services as manager/producer. Kitted out in bovver boots, jeans, shirts and braces, the re-christened SLADE topped their newly adopted ‘ard-as-nails look with skinheads all round; Chandler moulding the band’s image and sound in an attempt to distance them from the fading hippy scene. Winding up their time at Fontana with a couple of spectacular flops in `Wild Winds Are Blowing’ and Mann & Weil’s `Shape Of Things To Come’, Chas C was happy to guide them on to the roster of Polydor Records.

While SLADE attracted a sizeable grassroots following (although spawned 45, `Know Who You Are’, also bombed), their appropriately-titled first album, PLAY IT LOUD (1970) {*6}, failed to register enough sales. At a time when BLACK SABBATH were Lording-it up and DEEP PURPLE were raising the bar of rock, SLADE, too, were taking a pop at breaking the sound barrier. Sludgy and grimy, with no hint or inclination of things to come, tracks `Raven’, `See Us Here’ and a reading of NEIL INNES’ `Angelina’ (the other cover was Griffin & Royer’s `Could I’), might well’ve taken Holder and Co to another dimension or genre, had glam not come to fruition.
However, Chandler and his SLADE lads had their own agenda as they finally cracked the Top 20 in May ‘71 via a rousing cover of Bobby Marchan’s `Get Down And Get With It’; the track bringing them into the living rooms of the nation through a Top Of The Pops appearance. By this point, SLADE had grown some hair, painted their boots sci-fi silver and initiated the roots of “Slademania” (foot-stomping now all the rage). The noisy, gravel-throated Holder (complete with tartan trousers, top hat and mutton-chop sideburns), the bare-chested, glitter-flecked Hill and the not so flamboyant Lea and Powell, became part of the glam-rock brigade later in the year; `Coz I Luv You’ hit the top of the charts for 4 weeks, the follow-up `Look Wot You Dun’ peaked in the Top 5. As if to rid themselves of all their demonic, harder-edged workouts, concert set SLADE ALIVE! (1972) {*7} signed off in fine style before the road to glam-dom beckoned; the scream-a-long `Get Down With It’ was joined by re-vamps of TEN YEARS AFTER’s `Hear Me Calling’ and Holder’s relatively sedate take of The LOVIN’ SPOONFUL’s `Darling Be Home Soon’.
Competing with the likes of their aforementioned glitterati, the lads amassed a string of anthemic million-sellers over the ensuing year, namely `Take Me Bak ‘Ome’, `Mama Weer All Crazee Now’, and `Gudbuy T’ Jane’; the latter couple highlights on their chart-topping studio LP, SLAYED? (1972) {*7}. Mostly penned by Holder and Lea, the exceptions to the rule were covers of JANIS JOPLIN’s `Move Over’ and Shirley And Lee’s `Let The Good Times Roll’.

Released to coincide with the “best of” collection, the quieter `My Friend Stan’ also featured on SLADE’s third consecutive pole-position album, OLD, NEW, BORROWED AND BLUE (1974) {*5}; their perennial festive fave `Merry Xmas Everybody’ had already partied up to the top of the hit parade. The “noize” level was markedly lower on the attendant pop-ballad, `Everyday’, a record that only hit No.3 and slid out of chart contention after only seven weeks; glam-rock/pop shuddered to a halt around the same time. Their chart-topping albums were now relegated to the back of record collections, prog-sters PINK FLOYD, MIKE OLDFIELD, GENESIS et al, now vying for the attention of the more discerning rock fan, who’d little time for the anthemic pull of SLADE’s follow-up 45, `The Bangin’ Man’.

Wolverhampton’s finest were in their foot-stomping pomp again when they released SLADE IN FLAME (1974) {*7}, before the movie’s grainy, anti-glamour prefigured punk and ushered in a late-decade trough. The music wasn’t nearly as gratifyingly jaded as the film, but it was more of an album than the No.1 sets which it followed, plus it’s since weathered the years with most of its hard-knock soul intact. The tartan-scarf-waving `Far Far Away’ was SLADE’s last big hit until the early 80s, but it’s The BEATLES-esque ennui of `How Does It Feel?’ – their first platter since `Get Down…’ not to reach Top 10 status – which really carried the tired spirit of the movie. By sequencing the song back to back with the furious, quasi-punk thrash of `Them Kinda Monkeys Can’t Swing’, SLADE came off as more than just the terrace-friendly OASIS template they’re often bracketed under.

Concentrating on singles to recapture the long-lost souls of the glam-pack scene, `Thanks For The Memory (Wham Bam Thank You Mam)’ (a non-LP track), `In For A Penny’ and `Let’s Call It Quits’, hovered around the Top 10, but it was parent set NOBODY’S FOOLS (1976) {*4}, that sent SLADE spiralling out of contention. Living in America and trying to sound an accomplice to that West Coast market, fans were left debating whether they should stick around for further punishment.
Moving across the corridor to Barn Records, SLADE found it even harder to compete with the burgeoning punk/new wave scene, `Gypsy Roadhog’ (from the poignantly-titled WHATEVER HAPPENED TO (1977) {*5}), only denting the Top 50; the retro-fied SLADE ALIVE VOL. TWO (1978) {*6} suggested too, that their loss to the higher echelons of the music biz charts would be a sad one. The late 70s had worse to come when RETURN TO BASE (1979) {*4}, found only tepid results; there was however, a cover of CHUCK BERRY’s `I’m A Rocker’ thrown in at the deep end.

On the back of an enthusiastic response from a Reading Festival appearance in 1980 (a concert EP returned them to the Top 50), a deal with R.C.A.-financed Cheapskate Records heralded SLADE’s re-emergence into the Top 10 by way of `We’ll Bring The House Down’. With the bubblegum long-since blown away by their rousing and rambunctious return to rock’n’roll, both WE’LL BRING THE HOUSE DOWN (1981) {*7} and TILL DEAF DO US PART (1981) {*6}, kissed ass, and showed old rockers like STATUS QUO and NAZARETH weren’t the only survivors on the hard-rock block; 1982’s SLADE ON STAGE {*7} mixed up the old, the new, the borrowed and the blue.

SLADE continued on their merry way, untroubled by the fashion crimes of the 80s, although ROGUES GALLERY (1985) {*4} and the festive-y CRACKERS: THE CHRISTMAS PARTY ALBUM (1985) {*6}, found fans from every nook ’n’ cranny. Buoyed by the minor hit status of their version of BOB SEGER’s `Still The Same’, YOU BOYZ MAKE BIG NOIZE (1987) {*5}, was yet another slab of prime British beef-and-two-veg.

The following decade saw the band chart once more; the near-Top 20 `Radio Wall Of Sound’ blasting out Holder’s frantic yell to an appreciative Kerrang!-friendly audience.

On another footing, Messrs Hill and Powell continued to slog on regardless, without Holder and Lea, but with respective deputies Steve Whalley and Trevor Holliday; the latter having replaced Craig Fenney. To save a “noizy” rumpus from their former buddies, the choice-y SLADE II hit the road, releasing one disastrous Belgium-only set, KEEP ON ROCKIN’ (1994) {*2}. Performing as best they could to fans probably disturbed that there was no sign of Noddy and Jim, SLADE ploughed through their old catalogue on the continent – cabaret-ing to all asunder. While Holder had tread the boards as an actor (most notably in Granada TV’s The Grumbleweeds), post-millennium SLADE acquisition Dave Glover (bass) was embroiled in a bit of controversy when he betrothed himself (briefly and unceremoniously) to jail-bound serial killer Rosemary West. Needless to say, he was disengaged from the band forthwith, his berth taken by John Berry in 2003; fast forward two years, ex-SWEET man Mal McNulty, took over the frontman position of Whalley. Whatever happened to the real SLADE? 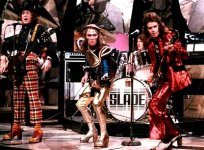 Yes, there is no rock singer quite like Noddy Holder .....his voice is so rough it stood out in his heyday

"Still The Same" was nothing to do with Bob Segar.
SLADE's song was all their own work, and very dreary it was too!
Come chat about them on my new posting "HAVE YOU BEEN SLAYED?"
I know all there is to know about this amazing band.

The later period Slade.....always with Noddy on vocals of course ....

This song was a rip off of "Barnyard Blues" & one of SLADE's less impressive singles taken from possibly their worst album, "Nobody's Fools".

SKELLYBOY said:
This song was a rip off of "Barnyard Blues" & one of SLADE's less impressive singles taken from possibly their worst album, "Nobody's Fools".
Click to expand...

I do have a great many Slade albums. I have a collection produced in the Russian Federation, so more or less unofficial release. It comprises of two full length albums on one cd. I'm sure the collection includes most if not all their albums. Live albums as well.
B

I created a darn good playlist on Spotify a few months ago, titled Wolverhampton Blues. Maybe 30 or 35 of my favorite songs.

Word of Noddy
"Everything is relative"
B

I was one of those 80's kids who did not know Slade until Quiet Riot brought them to attention in 1983. The next year, Keep Your Hands Off My Power Supply was released (in the US) and "Run Runaway" and "My Oh My" were amazing! Still, I was not a great enough fan to buy any other their albums.
Flash forward a little more than 15 years and I was willing to broaden horizons and open my mind to possibilities. I was still a single man at the time, so a good chunk of my income was going towards buying music. A few sellers on eBay had this collection of Slade compact discs I mentioned earlier, so I took a chance. I have never compared Slade's actually discography but I would say this collection is very complete.
Slade had many good songs, for sure.
B