Staff member
The mere mention of the name STEPPENWOLF immediately springs up one retort: “Born To Be Wild”. Possibly for the more discerning rawk buff, a verbal suffix of “The Pusher” and “Magic Carpet Ride”, would indeed follow. Any other response and one knew they’ve met the real McCoy, a bona fide fan, not just of the band, but hard-rock music in general. Penned by outward-bound member Mars Bonfire (alias Dennis Edmonton), the effervescent biker anthem `Born To Be Wild’ coined a new term in its lyrics “heavy metal (thunder)”, leaving its mark in history forever and eternity via its place astride the chopper motorbikes in the cult late-60s flick, Easy Rider. A hard road to emulate, Canada’s STEPPENWOLF (led by singer John Kay) had an albatross of sorts around their necks as the kaleidoscopic 60s turned into the classic rock 70s.

Switching location to Los Angeles, local lads Michael Monarch and Rushton Moreve (born John Rushton Morey) were respectively chosen to supersede Dennis, who signed off after contributing “Born To…”, and Nick, who joined The Hardtimes. There, they met producer Gabriel Mekler, who suggested the STEPPENWOLF moniker (after a Hermann Hesse novel), while dynamic demos led to the quintet signing to ABC’s Dunhill Records.
The eponymous STEPPENWOLF (1968) {*7} LP, reaped in the Top 10 rewards of a flower-power generation that was tuning in/tuning out to the vibes and stoner aftermath of the hippie culture and the obligatory drugs scene; near chart-topper `Born To Be Wild’ and HOYT AXTON’s anti-drug missive `The Pusher’ (trimmed to 6 minutes from a live 21), powerful enough to over-ride the fact they’d at first failed with opener `Sookie Sookie’ (scribed by DON COVAY and STEVE CROPPER) and the dated `A Girl I Knew’; WILLIE DIXON’s `Hootchie Cootchie Man’ was the other cover.

Now competing with the likes of VANILLA FUDGE, IRON BUTTERFLY, BLUE CHEER et al, STEPPENWOLF hit pay-dirt and platinum sales with the colourful funky psychedelia of the `Magic Carpet Ride’ single and its parent album, THE SECOND (1968) {*7}. Opening with a trusty Mars Bonfire number, `Faster Than The Speed Of Life’, the band then veered out of control at times (bubblegum to jazz in `None Of Your Doing’ and `Hodge, Podge, Strained Through A Leslie’), only to be restored by the marijuana ditty `Don’t Step On The Grass, Sam’ and Mekler’s garage-rocker, `28’.

Mekler, it must be said, had an increasing input into the band, providing no less than four tracks (`Don’t Cry’, `Lovely Meter’, `Happy Birthday’ and the shared `She’ll Be Better’) to their third Top 10 album, AT YOUR BIRTHDAY PARTY (1969) {*5}, though only big hitter `Rock Me’ (used for the cult-ish film flick Candy), it’s B-side `Jupiter’s Child’ and modest hit `It’s Never Too Late’, had any clout among the critics. Prior to its recording, Nick St. Nicholas had gate-crashed their intimate soiree in place of Russell, while subsequent personnel alterations took shape for the politically-motivated MONSTER (1969) {*6} – namely Larry Byrom for the exiting Monarch. Registering their scepticism for the Vietnam War by supporting the draft resisters and the libertarians, one segue that identified with the set was the opening `Monster – Suicide – America’. Slipping sales figures resulted in only a Top 20 position, while an edited title track, and `Move Over’ reached the Top 40. Stretching a handful of these songs and a few other favourites into a concert double-LP (primarily recorded at the Santa Monta Civic Center), `LIVE’ (1970) {*5} fitted the bill of a heavy-going STEPPENWOLF. While these hot-wired romps through dusty blues-rock terrain, the pseudo-intellectual musings and less-than-inspired songwriting of Kay (and his team) made the multitude of subsequent STEPPENWOLF releases hard going.

Dispensing with Nick and crux Gabriel, the hit machine was flagging for the Top 20 STEPPENWOLF 7 (1970) {*5}, which introduced bassist George Biondo and producer/co-engineer Richard Podolor into the equation. Very heavy, very grumbled, the growling John Kay lubed the larynx for `Ball Crusher’, his autobiographical `Renegade’, a re-arranged `Forty Days And Forty Nights’ (penned by Bernard Roth) and their anti-paean to cocaine abuse on HOYT AXTON’s `Snowblind Friend’ (a Top 60 hit).

Kent Henry (from BLUES IMAGE) in for Byrom, the diminishing chart returns came to an almighty crash and burn when 1971’s FOR LADIES ONLY {*4} stalled outside the Top 50. Despite similar returns for the title track and the “Born To Be…” Bonfire burner `Ride With Me’, STEPPENWOLF had long-since passed their sell-by date. An artefact rather than an album that howled from the rooftops, JK’s funky `Shackles And Chains’ (and other individual pieces from Edmonton, Biondo, Henry & McJohn) were pitted against a further two from Mars: `Tenderness’ and `The Night Time’s For You’ – the group songs losing out big time!
Maintaining his link with THREE DOG NIGHT producer Podolor, JOHN KAY (with Kent and Biondo assisting) recorded a couple of rootsy solo albums, the first of them FORGOTTEN SONGS & UNSUNG HEROES (1972) {*5} featuring no less than five covers: `Many A Mile’ (PATRICK SKY), `You Win Again’ (HANK WILLIAMS), `Bold Marauder’ (RICHARD & MIMI FARINA), `Walkin’ Blues’ (ROBERT JOHNSON) and the Top 60 hit `I’m Movin’ On’ (HANK SNOW); 1973’s MY SPORTIN’ LIFE {*5} continued the theme with less enthusiasm from fickle listeners – `Moonshine (Friend Of Mine)’ and `Easy Evil’, easily the star attractions.

With 1975’s HOUR OF THE WOLF {*4}, the band – Englishman Andy Chapin in for McJohn – failed to emulate their early momentum, starring as it did outsider cuts by Bonfire (`Caroline (Are You Ready For The Outside World)’), Alan O’Day (`Annie, Annie Over’) and Wayne Berry (`Another’s Lifetime’). A shadow of themselves on the fiendish SKULLDUGGERY (1976) {*3}, fresh keyboardist Wayne Cook couldn’t save this bargain binner; a cover of Motown hit `(I’m A) Road Runner’ digging a ditch beyond their soulful redemption. Prior to JOHN KAY delivering his third nondescript album, ALL IN GOOD TIME (1978) {*3}, Cook joined PLAYER.

Possibly ruffling a few feathers, the main man took the show on the road in 1980 and, as JOHN KAY & STEPPENWOLF (with guitarist Michael Palmer, Hammond organist Brett Tuggle, bassist Chad Peery and drummer Steven Palmer), issued for the Australian-only buyer, the back-in-business LIVE IN LONDON (1981) {*5}. A sad footnote to the set was that Moreve died in a car crash on July 1, 1981; Chapin later died in a plane crash on December 31, 1985.

With Welton Gite and Michael Wilk superseding Chad and Brett respectively, the outfit continued to inflict their tired biker-rock on an oblivious music world. Released only in Canada and down under, WOLFTRACKS (1982) {*3} – including a reading of ARGENT’s `Hold Your Head Up’ – and PARADOX (1984) {*3}, kept their motor running; singer-songwriter JACKIE DeSHANNON augmenting on backing vocals on her contribution, `Watch Your Innocence’.

Something of a group undertaking , JOHN KAY & STEPPENWOLF – now attributing Rocket Ritchotte (guitar), Michael Wilk (bass) and Ron Hurst (drums) – spat out the silver bullet and produced their finest set since the 60s in ROCK & ROLL REBELS (1987) {*6}. Politically-charged, waving the hard-rock flag high, it was thought good enough to re-release it a decade later as FEED THE FIRE (tracks slightly altered).

The resurrection coming full circle, I.R.S. Records were on board for RISE & SHINE (1990) {*4}, although this album didn’t pass quality control, even if tracks such as `The Wall’ and `Rock ‘N Roll War’ fist-pumped the falling of the Berlin Wall and paid homage to the Vietnam War veterans. Having married Chapin’s widow, former drummer Jerry Edmonton was killed in a car crash on November 28, 1993, in Santa Ynez, California.

Not the most considerate of titles in the wake of tragic events, LIVE AT 25 (1995) {*5} was another adequate run-through of the group’s best performances from a 1992 tour, while past member (from 1989-90) Steve Fister re-joined the band as of 1993-96; Danny Johnson was called upon for 2004’s “greatest hits in motion” LIVE IN LOUISVILLE {*5}. In the meantime, a solo JOHN KAY found his country-blues boots again for HERETICS & PRIVATEERS (2001) {*4}. He and his band continue to head on up the highway looking for adventure; bassist Gary Link freeing up Wilk to concentrate on keyboards. 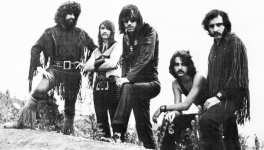 A great Canadian band together with Mahogany Rush (Frank Marino)...