Staff member
Britpop (and one emphasises the word “pop”) was made for punk-y trio SUPERGRASS, the said genre’s answer to BLUR, BOWIE and BUZZCOCKS. Melody-driven with street-smart sensibilities, the mutton-chopped Gaz Coombes and his youthful compadres had the world (or at least, Britain) at their feet in the mid-to-late 90s.

Formed early 1993 in Oxford, England, SUPERGRASS came about after both Gaz Coombes (vocals/guitar) and Danny Goffey (drummer) had spent time, alongside Danny’s brother Nic Goffey (guitar) and Andy Davies (bass), in the short-lived, shoegazing combo, The Jennifers. The schoolboy chums delivered their sole EP, `Just Got Back Today’, for Nude Records (home to SUEDE), in the spring of ’92. When Davies went off to Bristol University (Nic also left), Gaz and Danny duly recruited bassist Mick Quinn and formed SUPERGRASS, cutting the rather unnecessary prefix “Theodore” from the name.

Their raucous debut single, `Caught By The Fuzz’, complete with a STIFF LITTLE FINGERS-like intro and a snotty, shout-y vocal rampage recounting the teenage trauma of being busted for cannabis, could’ve conceivably come straight out of ‘77. Initially released on the small Backbeat label in 1994, the single was eventually released in legitimate format by Parlophone Records after the company promptly snapped the group up in 1994. Although the track narrowly missed the Top 40, a 1995 follow-up `Mansize Rooster’ cracked the Top 20; the MADNESS comparisons inevitable as SUPERGRASS wore their influences proudly on their retro sleeves. Another couple of singles followed in quick succession, `Lose It’ as a limited Sub Pop singles club release and `Lenny’ as the group’s first Top 10 hit. Few were surprised, then, when the debut album, I SHOULD COCO (1995) {*9} struck the No.1 spot the following month, a proverbial grab-bag of musical styles from 60s harmony pop to sneering punk. The record’s indisputable highlight was `Alright’, a perfectly formed BEACH BOYS via the Young Ones’ pop romp guaranteed to bring a smile to your face and proving that “Brit-pop” didn’t necessarily mean second rate STRANGLERS/BLONDIE rip-offs. The song, and especially the Raleigh Chopper-riding exploits of the video, did much to crystallise the SUPERGRASS image; carefree, fun-loving lads with Gaz’s wildly impressive sideburns adding to the cartoon appeal. Steven Spielberg was apparently even moved to offer the band the opportunity of starring in a 90s remake of The MONKEES series-cum-film. This was turned down, as was an offer for Gaz to model for Calvin Klein, the group preferring to concentrate solely on the music and downplay the novelty factor. Instead, there were two gems hidden away at the end of “Coco” which indicated the direction SUPERGRASS were headed; the intoxicating, slow-rolling 70s groove of `Time’ (coupled with the aforementioned `Alright’ on hit single format), and the dreamy psychedelia of `Sofa (Of My Lethargy)’.

Save a few live appearances and a solitary 45, `Going Out’ (think The KINKS), the trio were notably absent in ‘96, tucked away once more at Sawmill Studios crafting their acclaimed follow-up album. Eventually released the following spring, the record, IN IT FOR THE MONEY (1997) {*8} was something of a departure to say the least. The impetuous buzz-saw punk-pop of old had been replaced by the dark assault of `Richard III’, while the bulk of the album fed off warped neo-psychedelia and stark introspection. Horn flourishes were sighted here and there, most satisfyingly on the lazy chug of the aforementioned `Going Out’, while parping organs and acoustic strumming were the order of the day. The enigmatic shadow of The BEATLES’ “White Album” loomed large over proceedings, especially on `Late In The Day’ (a Top 20 hit), `You Can See Me’ and the oom-pa-pa eccentricity of `Sometimes I Make You Sad’. In fact, the only glimpse of the old SUPERGRASS came with `Sun Hits The Sky’, a soaring, handclapping, spirit-lifting celebration of good times and faraway places. No matter though, the record’s dark charm ensured the band remained a critical favourite, if not quite consolidating the commercial heights of the debut. Clearly, SUPERGRASS were looking at a long term, albums-based career, and on the strength of “In It…”, the future seemed promising.

In May ‘99, the glam BOWIE-esque `Pumping On Your Stereo’ was the first of three hit singles, the second `Moving’ (Dogs by PINK FLOYD might’ve been “pumping on their stereo” at the time!?) previewing their self-titled third Top 3 album, SUPERGRASS {*6}; `Mary’ only scraped a Top 40 place. However, several critics rated this as a drop in form. Ali G (Boo-y aka Sacha Baron Cohen) duly, but light-hearted demolished the er, “Super-tramp” Gaz on his cult TV show; the `Sun Hits The Sky’, indeed.

The ‘Grass returned in 2002 with the brilliant LIFE ON OTHER PLANETS {*7}, a sweeping pop/rock album featuring Coombes’ wacky strained vocals and a couple of sure-fire singles to boot by way of the infectious `Grace’ (characterised by the line “Save your money for the children”) and the BOLAN-esque `Seen The Light’; the power-pop-punk of `Evening Of The Day’ and `Never Done Nothing Like That Before’ (the only one-sided chart entry ever!?). In short, it was great to have them back.

It hardly seemed like a decade since `Alright’, but their Top 10 fifth album, ROAD TO ROUEN (2005) {*7} – on the back of a “greatest hits” compilation featuring Top 30 spawn `Kiss Of Life’ – was a punningly-titled, largely introspective and unexpectedly haunting work recorded in a remodelled barn in the Gallic hinterlands of Normandy (hence the title). Opening with the heavy, piano-chord soul of a lost JOHN MARTYN classic, the album uncoiled as a mood piece rather than a pop album, tailored here and there with some stray folk influences (Eastern European as well as Anglophone; see the playful `Coffee In The Pot’) and peppered with the odd upbeat rocker. The overriding influence, however, was The BEATLES, looming large in both the Top 30 single, `St. Petersburg’, and the LENNON-esque closing brace of `Low C’ and `Fin’; Gaz’s older brother Rob Coombes (an auxiliary since ’99) was promoted to official 4th member prior to the album’s release.
After time spent waiting for Quinn to recover after fracturing his heel bone, 2008’s DIAMOND HOO HA {*6} – the moniker of Gaz and Danny’s moonlighting side-project – missed the needed impetus to boost their crumpled-looking CV. Decked by a near-dozen gutsy and exuberant ditties, some fine, some not so fine, the quartet were on a sticky wicket from the time the set scraped into the Top 20. With a world recession in motion, the cull was on for “ageing” Brit-pop stars unwilling to escape from the status quo. Flop singles `Bad Blood’, `Rebel In You’ and the title track went a long way in convincing the band had had their day, and it was sad to see another once-major act bite the dust. In their day, SUPERGRASS had covered JIMI HENDRIX’s `Stone Free’, SMALL FACES’ `Itchycoo Park’, The SMITHS’ `Some Girls Are Bigger Than Others’, NEIL YOUNG’s `The Loner’ and MICHAEL JACKSON’s `Beat It’. 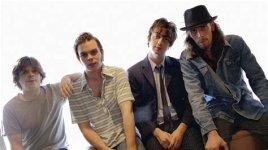