Staff member
Although they only attained the huge success of the Beatles, Rolling Stones, and the Beach Boys for a short time in the mid-'60s, time has judged the Byrds to be nearly as influential as those groups in the long run. They were not solely responsible for devising folk-rock, but they were certainly more responsible than any other single act (Dylan included) for melding the innovations and energy of the British Invasion with the best lyrical and musical elements of contemporary folk music. The jangling, 12-string guitar sound of leader Roger McGuinn's Rickenbacker was permanently absorbed into the vocabulary of rock. They also played a vital role in pioneering psychedelic rock and country-rock, the unifying element being their angelic harmonies and restless eclecticism. Often described in their early days as a hybrid of Dylan and the Beatles, the Byrds in turn influenced Dylan and the Beatles almost as much as Bob and the Fab Four had influenced the Byrds. the Byrds' innovations have echoed nearly as strongly through subsequent generations, in the work of Tom Petty, R.E.M., and innumerable alternative bands of the post-punk era that feature those jangling guitars and dense harmonies. Although the Byrds had perfected their blend of folk and rock when their debut single, "Mr. Tambourine Man," topped the charts in mid-1965, it was something of a miracle that the group had managed to coalesce in the first place. Not a single member of the original quintet had extensive experience on electric instruments. Jim McGuinn (he'd change his first name to Roger a few years later), David Crosby, and Gene Clark were all young veterans of both commercial folk-pop troupes and the acoustic coffeehouse scene. They were inspired by the success of the Beatles to mix folk and rock; McGuinn had already been playing Beatles songs acoustically in Los Angeles folk clubs when Clark approached him to form an act, according to subsequent recollections, in the Peter & Gordon style. David Crosby soon joined to make them a trio, and they made a primitive demo as the Jet Set that was nonetheless bursting with promise.

With the help of session musicians, they released a single on Elektra as the Beef eaters that, while a flop, showed them getting quite close to the folk-rock sound that would electrify the pop scene in a few months. the Beefeaters, soon renamed the Byrds, were fleshed out to a quintet with the addition of drummer Michael Clarke and bluegrass mandolinist Chris Hillman, who was enlisted to play electric bass, although he had never played the instrument before. The band was so lacking in equipment in their early stages that Clarke played on cardboard boxes during their first rehearsals, but they determined to master their instruments and become a full-fledged rock band (many demos from this period would later surface for official release). They managed to procure a demo of a new Dylan song, "Mr. Tambourine Man";by eliminating some verses and adding instantly memorable 12-string guitar leads and Beatlesque harmonies, they came up with the first big folk-rock smash (though the Beau Brummels and others had begun exploring similar territory as well). For the"Mr. Tambourine Man" single, the band's vocals and McGuinn's inimitable Rickenbacker were backed by session musicians,although the band themselves (contrary to some widely circulated rumours) performed on their subsequent recordings. The first long-haired American group to compete with the British Invasion bands visually as well as musically, the Byrds were soon anointed as the American counterpart to the Beatles by the press, legions of fans, and George Harrison himself. Their1965 debut LP, Mr. Tambourine Man, was a fabulous album that mixed stellar interpretations of Dylan and Pete Seeger tunes with strong, more romantic and pop-based originals, usually written by Gene Clark in the band's early days.

A few months later, their version of Seeger's "Turn! Turn! Turn!" became another number-one hit and instant classic, featuring more great chiming guitar lines and ethereal, interweaving harmonies. While their second LP (Turn! Turn! Turn!) wasn't as strong as their debut full-length, the band continued to move forward at a dizzying pace. In early 1966, the "Eight Miles High" single heralded the birth of psychedelia, with its drug-like (intentionally or otherwise) lyrical imagery, rumbling bassline, and a frenzied McGuinn guitar solo that took its inspiration from John Coltrane and Indian music. The Byrds suffered a major loss right after "Eight Miles High" with the departure of Gene Clark, their primary songwriter and,along with McGuinn, chief lead vocalist. The reason for his resignation, ironically, was fear of flying, although other pressures were at work as well. "Eight Miles High," amazingly, would be their last Top 20 single; many radio stations banned the record for its alleged drug references, halting its progress at number 14. This ended the Byrds' brief period as commercial challengers to the Beatles, but they regrouped impressively in the face of the setbacks. With the band continuing as a quartet, McGuinn,Crosby, and Hillman would assume a much larger (actually, the entire) chunk of the songwriting responsibilities. The third album, Fifth Dimension, contained more groundbreaking folk-rock and psychedelia on tracks like "Fifth Dimension," "I See You,"and "John Riley," although it (like several of their classic early albums) mixed sheer brilliance with tracks that were oddly half-baked or carelessly executed. Younger Than Yesterday, (1967) which included the small hits "So You Want to Be a Rock 'n' Roll Star" and "My Back Pages"(another Dylan cover), was another high point, Hillman and Crosby in particular taking their writing to a new level. In 1967,Crosby would assert a much more prominent role in the band, singing and writing some of his best material. He wasn't getting along so well with McGuinn and Hillman, though, and was jettisoned from the Byrds partway into the recording of The Notorious Byrd Brothers. Gene Clark, drafted back into the band as a replacement, left after only a few weeks, and by the end of 1967, Michael Clarke was also gone. Remarkably, in the midst of this chaos (not to mention diminishing record sales),they continued to sound as good as ever on Notorious. This was another effort that mixed electronic experimentation and folk-rock mastery with aplomb, with hints of a growing interest in country music.
As McGuinn and Hillman rebuilt the group one more time in early 1968, McGuinn mused upon the exciting possibility of a double album that would play as nothing less than a history of contemporary music, evolving from traditional folk and country to jazz and electronic music. Toward this end, he hired Gram Parsons, he has since said, to play keyboards. Under Parsons' influence,however, the Byrds were soon going full blast into country music, with Parsons taking a large share of the guitar and vocal chores. In 1968, McGuinn, Hillman, Parsons, and drummer Kevin Kelly recorded Sweetheart of the Rodeo, which was probably the first album to be widely labeled as country-rock.Opinions as to the merits of Rodeo remain sharply divided among Byrds fans. Some see it as a natural continuation of the group's innovations; other bewail the loss of the band's trademark crystalline guitar jangle, and the short-circuited potential of McGuinn's most ambitious experiments. However one feels, there's no doubt that it marked the end, or at least a drastic revamping, of the "classic" Byrds sound of the 1965-1968 period (book ended by the Tambourine Man and Notorious albums).Parsons, the main catalyst for the metamorphosis, left the band after about six months, partially in objection to a 1968 Byrds tour of South Africa. It couldn't have helped, though, that McGuinn replaced several of Parsons' lead vocals on Rodeo with his own at the last minute, ostensibly due to contractual obstacles that prevented Parsons from singing on Columbia releases.(Some tracks with Parsons' lead vocals snuck on anyway, and a few others surfaced in the 1990s on the Byrds box set). Chris Hillman left the Byrds by the end of 1968 to form the Flying Burrito Brothers with Parsons. Although McGuinn kept the Byrds going for about another five years with other musicians (most notably former country picker Clarence White),essentially the Byrds name was a front for Roger McGuinn and backing band. Opinions, again, remain sharply divided about the merits of latter-day Byrds albums. McGuinn was (and is) such an idiosyncratic and pleasurable talent that fans and critics are inclined to give him some slack; no one else plays the 12-string as well, he's a fine arranger, and his Lennon-meets-Dylan vocals are immediately distinctive. Yet aside from some good echoes of vintage Byrds like "Chestnut Mare," "Jesus Is Just Alright," and "Drug Store Truck Drivin' Man," nothing from the post-1968 Byrds albums resonates with nearly the same effervescent quality and authority of their classic 1965-1968 period. This is partly because McGuinn is an erratic (though occasionally fine) songwriter; it's also because the Byrds at their peak were very much a unit of diverse and considerable talents, not just a front for their leader's ideas.

The Byrds' diminishing importance must have stung McGuinn doubly in light of the rising profiles of several Byrds alumni as the'60s turned into the '70s. David Crosby was a superstar with Crosby, Stills, Nash & Young; Hillman, Parsons, and (for a while)Michael Clarke were taking country-rock further with the Flying Burrito Brothers; even Gene Clark, though he'd dropped out of sight commercially, was recording some respected country-rock albums on his own. The original quintet actually got back together for a one-off reunion album in 1973; though it made the Top 20, it was the first, and one of the most flagrant,examples of the futility of a great band reuniting in an attempt to recapture the lightning one last time. The original Byrds continued to pursue solo careers and outside projects throughout the 1970s and 1980s. McGuinn, Clark,and Hillman had some success at the end of the 1970s with an adult contemporary variation on the Byrds' sound; in the1980s, Crosby battled drug problems while Hillman enjoyed mainstream country success with the Desert Rose Band. the Byrds'legend was tarnished by squabbles over which members of the original lineup had the rights to use the Byrds name; for quite a while, drummer Michael Clarke even toured with a "Byrds" that featured no other original members. the Byrds were inducted into the Rock & Roll Hall of Fame in 1991; Gene Clark died several months later, and Michael Clarke died in 1993, permanently scotching prospects of a reunion involving the original quintet. 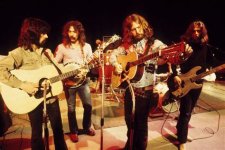 My favourite american band. Their first five albums (Mr. Tambourine Man, Turn Turn Turn, Fifth Dimension, Younger Than Yesterday and The Notorious Byrd Brothers) are all amazing. I'm not that fan of the album Sweetheart of the Rodeo (one of the so-called classics of the band), but it contains good songs. My favourite album from the "Roger Mcguinn solo Byrds" era is Untitled/Unissued. Great great album, specially the edition with bonus tracks. My absolute favourite of their whole career is Notorious. I love it. But I'm drooling too much. I better leave it here.
Show hidden low quality content
Share:
Facebook Twitter Reddit Pinterest Tumblr WhatsApp Email Share Link
Forum Community