Staff member
This is the debut album of one of the most important rock and roll bands of all time which was released in 1967. This album in my opinion is The Doors strongest album. This album has everything on it from German Opera (Whiskey Bar) to Chicago Blues (Back Door Man). I couldn't see any fan of rock music disliking this album. This album features their epic hit The End as well as Light My Fire and Twentieth Century Fox. If you want to start listening to The Doors or even if you want to start listening to Classic Rock start here. I could type pages and pages explaining about how good I think this album is but you really need to listen to it for yourself, but I will give a track by track review of one of my favorite albums of all time.

1. Break On Through (To The Other Side) - This is a Doors classic, One of their most fast paced songs. This features some great guitar work during the chorus. The Keyboard solo is just so recognizable as on most Doors songs. I'm sure most of you have heard this song so I'll just move on.
Rating: 5/5

2. Soul Kitchen - The song starts out with a great rhythm from the keyboard and moves on to a heavy chorus with Morrison yelling. The guitar solo is very smooth and mellow, it flows nicely with the song. One of the softer songs on the album.
Rating: 4.5/5

3. The Crystal Ship - This is a very slow song with a classical piano background that features some great lyrics. This song features Morrison reciting some great poetry and the mood of the song is very sleepy feeling. This song almost makes you drift off to sleep.
Rating: 4.5/5

4. Twentieth Century Fox - Once you start to feel sleepy after listening to The Crystal Ship the album picks up on this bluesy track. The Guitar solo is very nice and the Keyboard backgrounds, as always, flow great with the song.
Rating: 4/5

5. Alabama Song (Whisky Bar) - This song is based off of a German Opera. The lyrics aren't very deep but they are classic none the less. The keyboard fills at the end of the verses give off a very eerie tone to the song. Forget "One Bourbon, One Scotch, and One Beer", this is an ode to alcoholics everywhere.
Rating: 4/5

6. Light My Fire - This is probably The Doors' most famous song ever. It starts off with a menacing keyboard solo and settles into a slow rhythm as Morrison sings. Everytime I hear this song it always reminds me of on the movie The Doors when Jim Morrison refuses to say "Girl we couldn't get much better", but says "Girl we couldn't get much higher" on Live Television. The Interlude is the best part of the song. The Keyboard and Guitar solos are just so psychedelic and amazing. This is a Psychedelic masterpiece.
Rating: 5/5

7. Back Door Man - A Willie Dixon cover that features some greatblues playing by the band. The Song begins with Morrison making strange noises and howling. The Guitar solo is just as standard as the song is for Blues. Nonetheless a Great Song Overall.
Rating: 4/5

8. I Looked At You - This song has a really great rhythm. It features a great organ solo by Manzarek. This is a great rock and roll song, Not one of my favorites on the album.
Rating: 3.5/5

9. End of The Night - This song is very out there and psychedelic. The Guitar has a tremolo effect that makes it feel very spacy. The Guitar solo is played with a slide which adds great to the song. Right as you com out of the guitar solo the band bursts one more time as Morrison screams. The lyrics aren't the best in this song but they are far from bad.
Rating: 4/5

10. Take it as It Comes - The Organ solos in this song are just amazing and flow so well with the song. The Chorus is very powerful and hits you hard everytime it comes , "Take it Easy Baby/Take it as it comes". This is a great Hard Rocker.
Rating: 4/5

11. The End - The Final Song on The Album and maybe one of their most famed songs ever. The Guitar part in this song sounds very Middle-Eastern. You can barely hear the organ in this song but it is better because an overbearing organ wouldn't really fit with the mood of the song. Morrison's lyrics may be the strongest in this song out of his career. This is the song that got The Doors banned from the whiskey a go go, The part in the song where he says "Father yes son I want to kill you/Mother I want to f**k you". This song is a definition of Psychedelia, It is an amazing song.
Rating: 5/5 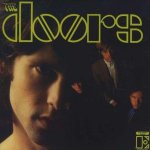