Staff member
During an epic spell from 1979 to 1983, former punk/new wave trio turned arena gods, The POLICE, had the world at their feet. The arresting catchy pop combination of the high-pitched vox of Sting, the reggae-tinted guitar style of Andy Summers and the polyrhythms of sticksman Stewart Copeland, sold million of records across the globe.

Formed early 1977 in London, England, drummer Stewart Copeland (son of a CIA agent based in California), bleach-blonde vocalist/bassist Sting (formerly Gordon Sumner, a teacher from up north) and original guitarist Henry Padovani, abandoned all thoughts of become a jazz-rock outfit to latch on to the punk movement. That May, with backing from Stewart’s brother, Miles Copeland (on his newly-founded Illegal Records), The POLICE issued their debut punk single, `Fall Out’. Almost immediately after the record’s release, the three were invited by GONG member Mike Howlett to join veteran guitarist Andy Summers in live band, Strontium 90. Following Padovani’s departure in August (to form the brilliantly monikered Flying Padovani Brothers), Andy took his position in The POLICE; this modified line-up initially sessioning on Eberhard Schoener’s “Video Flashback” album.

Like all the best “punk” bands of the time, The POLICE trio weren’t actually punk at all, the members all coming from some kind of “muso” background, journeyman Summers having noodled for the likes of ERIC BURDON/The ANIMALS, SOFT MACHINE, ZOOT MONEY, KEVIN AYERS, KEVIN COYNE, etc, while Copeland had drummed for prog-rock merchants, CURVED AIR, and Sting had plucked his bass for the jazzy Last Exit. Not exactly the best credentials for the “anyone can play” DIY ethos of punk, but The POLICE succeeded by infusing their complex reggae-tinged pop/rock with insidiously catchy hooks and radio friendly melodies, while keeping most of their songs down to an acceptable post-hippy playing time. They also cultivated a trendy image, sporting their new bleach-blond barnets on a Wrigley’s Spearmint Gum TV ad.

After supporting SPIRIT of all people (who’d also had a brief dalliance with Illegal), The POLICE signed to A&M Records, releasing their second single, `Roxanne’, shortly afterwards. Initially, this paean to a lady of the night failed to score a chart position, although it was subsequently released a year on, reaching No.12 on the back of its rise into the American Top 40. Their follow-up, `Can’t Stand Losing You’, was a minor UK chart hit as their debut album, OUTLANDOS D’AMOUR (1978) {*8} – translated as “Outlaws of Love” – made inroads into people’s playlists. An impressive collection with a strong rhythmic thrust and a few token nods to angst-punk (examples `Next To You’, `Peanuts’ and `Truth Hits Everybody’), the set was finally given its due when it was re-promoted the following year, reaching the UK Top 10 (US Top 30) in the spring of ‘79. Reggae was in-vogue for adaptable Brit-punk acts of the day, and the likes of `Masoko Tanga’ and `Hole In My Life’ drew further potential and diversion, while flop first time around, `So Lonely’, hit UK Top 10 status when belatedly re-issued. Taking his first absence of leave, the moonlighting STEWART COPELAND took the masked role of KLARK KENT for a one-off Top 50 diversion in `Don’t Care’; he’d follow the single but with no success.
Later that summer, The POLICE captured their first No.1 single with the power-pop of the `Message In A Bottle’ single, swiftly followed by a chart-topping album in REGGATTA DE BLANC (1979) {*6} – aka “White Reggae”. Again the record illustrated the band’s masterful grasp of dynamics, using time changes to enhance rather than detract from the pop appeal of their songs. From the space-reggae of `Walking On The Moon’ (another No.1), to the melodic lament of `The Bed’s Too Big Without You’, the trio were continually charting new musical territory. Sadly, but for their Grammy-winning title track instrumental, and possibly the adrenaline-pumping `No Time This Time’, the album lacked the snarl and bite of its predecessor.

It was only a matter of time before the group broke through on a global scale, including the lucrative American market. That break came with their ZENYATTA MONDATTA (1980) {*8} album and its attendant hits, `Don’t Stand So Close To Me’ (their third UK chart-topper) and the lyrically, unadulterated rhythmic genius of Top 5 smash, `De Do Do Do, De Da Da Da’. Peaking at No.5 in the US charts, a second Grammy was lifted for their token instrumental, `Behind My Camel’, while the worldly observational `Bombs Away’, `Driven To Tears’ and `When The World Is Running Down, You Make The Best Of What’s Still Around’, were perfect pop dirges along with `Canary In A Coalmine’.

By the release of fourth album, GHOSTS IN THE MACHINE (1981) {*7}, The POLICE were now a world beating act, once more delivering the goods with a more instrumentally diverse opus best sampled on the exotically effervescent `Every Little Thing She Does Is Magic’; the band’s fourth top spot stealer. Sting’s lyrics were also taking on a new depth, notably on prior Top 3 hit, `Invisible Sun’, wherein the singer commented on strife-torn Northern Ireland. Produced by Hugh Padgham (who superseded Nigel Gray), choice cuts came through opener `Spirits In The Material World’ (which just failed to reach the Top 10), `Hungry For You (J’Aurais Toujours Faim De Toil)’ and the perky `Demolition Man’.

The talented trio duly sprung up in other duties, solo STING in his first major starring role (and OST contributor) in the 1982 movie, Brimstone & Treacle, while ANDY SUMMERS completed his first of two sets with ROBERT FRIPP: `I Advance Masked’, the same year; COPELAND popped up with his first of several film scores, Rumblefish (1983), the OST featuring the weird and wonderful vox of ex-WALL OF VOODOO man, STAN RIDGWAY on the collaborative single, `Don’t Box Me In’.
Bearing in mind that STING’s songs formed the bulk of The POLICE’s output – leading to simmering discontentment in the ranks – it was surprising how well the trio gelled on their final release and undisputed masterpiece, SYNCHRONICITY (1983) {*8}. The brooding atmospherics of `Every Breath You Take’ (a massive worldwide No.1) formed the album’s centrepiece, while the melancholy Top 10’er `Wrapped Around Your Finger’, the sprightly `King Of Pain’ and the pummelling `Synchronicity II’, illustrated the band’s ability to craft a consistently satisfying but varied musical palate. One of Summers’ co-contributions, `Mother’, might well’ve suited his FRIPP project better, and Copeland’s rhythmic `Miss Gradenko’ was another diversion, but it at least showed that the trio were happy to experiment.

However, the aforementioned tensions ultimately led to the band’s demise, although an official announcement wasn’t made until 1986; the trio working on solo projects in the meantime. Predictably, STING was the only member who went on to any great deal of commercial success, while both scoresmith COPELAND and guitar hero SUMMERS lingered in relative obscurity, albeit garnering great respect from their peers.

Buoyed by subsequent chart-topping singles compilations (one in 1997 even combining the hits of STING and The POLICE – including a Top 20 PUFF DADDY remix of `Roxanne’), it was inevitable that the trio, like so many other acts, would enter the stage again. Following a brief reunion spot at the 2007 Grammy Awards, The POLICE took on a gruelling world tour that started that May and ended in August 2008. Marking their return, a double-CD/DVD, CERTIFIABLE: LIVE IN BUENOS AIRES {*6} – recorded December 1st & 2nd 2007 at the River Plate Stadium in Argentina – documented this curtain-call for one of England’s best-loved rock-pop outfits. 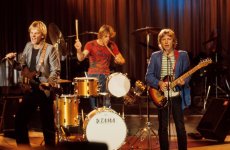 Staff member
Not normally a big fan of compilations but these are all good tracks.