Staff member
The “Madchester” indie/dance scene was thriving by the late 80s, and while groups such as HAPPY MONDAYS, INSPIRAL CARPETS and The CHARLATANS played their individual part in bringing the movement into fruition, catalysts The STONE ROSES signified its true commercial potential. It was just a pity that the overnight success of their 60s-styled debut set (and several hits from it) overwhelmed the lads into taking some drastic decisions; the decision to move from Silvertone Records in 1990 led the band into subsequent lawsuits, courts and musical exile.

Formed in Manchester late summer 1984, former Altrincham Grammar School acquaintances Ian Brown and guitarist John Squire had played in various outfits; one in particular, The Patrol, cemented their first association with bassist-to-be Andy Couzens. While singer Brown flitted in between performing for The Waterfront (by late ’83) and running a Northern Soul club in Salford, Squire would link up with Brown again, rhythm guitarist Pete Garner and drummer Alan Wren (aka Reni), the latter taking over from future FALL man Simon Wolstencroft.

After a Martin Hannett produced 45 (`So Young’) in the autumn of ‘85, The STONE ROSES retreated to rehearse fresh songs, only returning when they signed a one-off deal with Black Records/Revolver FM as 1986 seemed to evaporate for them. Sophomore single `Sally Cinnamon’ was finally delivered the following spring, albeit as lead track of a limited-edition 12” maxi-single; Garner had already announced his departure. Struggling to find the right man to fill the boots of Couzens (Rob Hampson couldn’t quite fit in), an old chum of Brown, Gary Mounfield (aka Mani), was duly drafted in late 1987.

Almost overnight, The STONE ROSES quintet found they were at the centre of some signing speculation as Messrs Geoff Travis (from Rough Trade) and Roddy McKenna (of Zomba Records) bid for the quartet’s attentions. While NEW ORDER’s PETER HOOK was drafted in by the former to produce their third 45, the classic `Elephant Stone’, it would be the latter who won the day when Andrew Lauder (of Jive Records’ alt-rock subsidiary Silvertone) moved the band his side of the corporate corridor. The ‘Roses soon became darlings of the music press after the indie success of the aforementioned 1988 single, a gloriously uplifting piece of pristine pop. Propelled by Reni’s consummate drumming and featuring Squire’s dizzy, spiralling guitar, the track was a blueprint for the group’s eponymous John Leckie-produced debut album, THE STONE ROSES (1989) {*10}.

Surely a contender for album of the decade, the record was flawless, from the ominous opening bass rumble of `I Wanna Be Adored’ to the orgasmic 8-minute finale of `I Am The Resurrection’. This life-affirming hybrid of 60s-style psychedelia and shuffling rhythmic flurries remains the definitive indie album, its all-pervading influence more pronounced with each successive crop of guitar bands. Even Squire’s artwork (inspired by a Jackson Pollock splatter job) was well-crafted, while Brown’s “baggy”-styled arrogance, a style that was to influence follower Liam Gallagher in spades, was cool and funky. `Made Of Stone’, `She Bangs The Drums’ (their initial Top 40 breakthrough platter), `Waterfall’ and the anthemic `This Is The One’ found an audience among the young looking for a new identity for the 90s. Incredibly, the band topped the magic of their debut with the `Fools Gold’ epic, which exploded into the Top 10 later that year. A seminal guitar-funk workout, it was the crowning glory of the “Baggy” movement with which The STONE ROSES had become so closely affiliated, and marked a creative highpoint in their career. After a few one-off shows (that have since achieved almost mythical status) and a solitary single, `One Love’, the following year, the band were forced into musical exile after they tried to cop out of a 8-album deal with Silvertone; who just kept running out single after single lifted from the classic set, deplorable actions which finally ran out of steam in 1992. In the four years that followed after their initial dispute, the band fought a protracted court battle with Lauder’s Silvertone, although it was finally settled when Geffen Records took them on for a reported record sum of $4,000,000.

After much speculation and intrigue into when or if a follow-up would finally appear, the appropriately titled SECOND COMING {*6} was eventually released toward the fall of ‘94. A month previously, the quartet had enjoyed a return to the singles chart with the ZEPPELIN-esque `Love Spreads’. Shoegazing, grunge and Brit-pop had evolved while Brown, Squire, Mani and Reni were squabbling in the studio. Of the album itself, the effervescent pop of old took second place to riff-heavy guitar workouts, alienating many of their original fans. Nevertheless, the blistering funk-rock of `Begging You’ and the more derivative `Ten Storey Love Song’ partly made up for any excess noodling by Squire; the opening 11-minute “Sympathy For The Devil”-salvo owed much to the other ‘Stones, HENDRIX and a raft of 60s hard-rockers than their own debut-LP sound.

As The STONE ROSES faithful dusted down their flares and beany hats in readiness for the band’s headlining spot at the 1995 Glastonbury festival, they were again bitterly disappointed. At the last minute the band pulled out, apparently due to Squire breaking his collarbone, young pretenders OASIS stealing the show in their absence. They had once again failed to seize the moment and from here on in, it was all downhill. Despite an ecstatically received winter tour, Squire shocked the music world by departing the following spring (Reni had already quit a year earlier). Brown and Mani bravely soldiered on for a headlining appearance at the 1996 Reading Festival but were given a critical mauling (particularly by the NME), finally splitting later that year. It was a sorry, messy end for a band that had seemed, at one point, to be on the brink of world domination and it remains a bitter irony that their duller Manchester progeny, OASIS, seem to have inherited the success that tragically eluded the ‘Roses.

While both IAN BROWN and JOHN SQUIRE enjoyed respective success in their subsequent solo projects (the latter initially with The SEAHORSES), Mani took his place in PRIMAL SCREAM while Mani formed the short-lived The Rub. And just when things looked ominous for yet another rumoured STONE ROSES reunion by 2011, it was clear at least Mani was up for the job as he left PRIMAL SCREAM; the original quartet has since played to a select 1000 fans free of charge – the price of a CD/T-shirt – (23rd May 2012) at Parr Hall in Warrington; sell out shows and an album will follow later in the year. With the band’s reputation, fans were not holding their breath too long. In the meantime, a Shane Meadows documentary, The Stone Roses: Made Of Stone was premiered in summer 2013.

Then, out of the blue, in May 2016, as if to contradict any doubters of The STONE ROSES’ intentions to make their reincarnation a full-time concern, Virgin-EMI dropped a single, `All For One’. Such was the demand for the anthemic song that it cracked the Top 20, and paved the way for single two, the lengthier and derivative, `Beautiful Thing’, which just failed to emulate its predecessor. Once again a “third coming” album was mooted but never issued. On 24th June 2017, Ian and the band chose Hampden Park in Glasgow to announce that this indeed would be their final concert. Mmm… 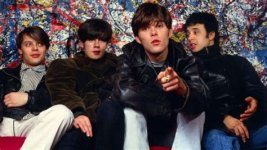