Staff member
Rock Band Date Of Birth: 1964 Place Of Birth: London, England Best Known As: The British band that sang “My Generation” The Who were one of the great rock bands of the 1960s and 1970s. In its glory years the group consisted of guitarist and main songwriter Pete Townsend (b. 19 May 1945), singer Roger Daltrey (b. 1 March 1944), bassist John Entwistle (b. 9 October 1944, d. 27 June 2002) and drummer Keith Moon (b. 23 August 1946, d. 7 September 1978). Early on the group was part of the “Mod” movement, playing R&B music in stylized tailored suits, before morphing into an unruly proto-punk band famous for smashing its instruments at the end of live performances. This period is epitomized by the oft-mentioned lyric “Hope I die before I get old” in the band’s 1965 tune “My Generation.” Eventually The Who graduated into high-minded and inventive rock, rising in fame alongside fellow Brit superbands The Beatles and The Rolling Stones and playing at Woodstock in 1969. Daltry was a blonde-maned and bare-chested lead singer, Townshend an energetic dervish on guitar. Moon became one of rock-and-roll’s great flameouts, famous for his savage drumming and whimsically mad offstage life until his sudden death at age 32. Burly bassist Entwistle anchored the group, standing stoically alongside Townshend’s leaps and windmills. The band continued on after the deaths of Moon and later Entwistle, touring and recording into the 21st century. Their many albums include My Generation (1965), The Who Sell Out (1969, including the single “I Can See for Miles”), the groundbreaking rock opera Tommy (1969, with the single “Pinball Wizard”), the landmark Live at Leeds (1970), Who’s Next (1971, with the singles “Baba O’Reilly” and “Won’t Get Fooled Again”), Who Are You (1978), and It’s Hard (1982). The 1973 concept album Quadrophenia was the basis for a 1979 movie. A 1979 documentary of the band, The Kids Are Alright, was titled after their 1965 single of that name. The Who were inducted into the Rock and Roll Hall of Fame in 1990. Their first studio album in almost 25 years, Endless Wire, was released in 2006. Extra Credit:

Singer Colin Dawson and drummer Doug Sandom were early members of the band, but departed before the group became famous… Moon died of an overdose of of the prescription drug Heminevrin, a drug intended to control alcoholism. By coincidence, he died in the same apartment where Mama Cass Elliot had died in 1974… Moon was succeeded by drummer Kenny Jones and later by Zak Starkey, son of Beatles drummer Ringo Starr… Entwhistle was succeeded by bassist Pino Paladino… 11 fans were crushed to death on 3 December 1979 while rushing to get seats at a The Who concert in Cincinnati, Ohio… Some sources list Moon’s birth year as 1947; though Moon himself often claimed 1947, the correct year seems to be 1946. 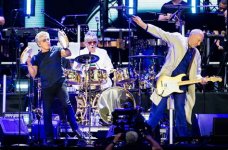 Won't get fooled again tells it like it is and is like a punch to face to conservative rhetoric in politics......a very relevant song especially today

Staff member
It is a classic track from a classic album. In fact almost every tack is a classic with IMO won't get fooled again being (slightly) eclipsed by 'behind blue eyes'

Floyd said:
It is a classic track from a classic album. In fact almost every tack is a classic with IMO won't get fooled again being (slightly) eclipsed by 'behind blue eyes'

These 2 songs are among my favs along with their majestic version of Summertime Blues as well as Substitute, Baba O'Riley and Boris the Spider ....John Entwhistle, the shy bass player on this live video has the chance to come out and express his inner feelings on this one

changeling said:
These 2 songs are among my favs along with their majestic version of Summertime Blues as well as Substitute,
Click to expand...

They do those covers on their live sets but I don't think they are on any of their albums. Could be wrong? The only cover I can think of on one of their albums is young man blues by Mose Allison.

Floyd said:
They do those covers on their live sets but I don't think they are on any of their albums. Could be wrong? The only cover I can think of on one of their albums is young man blues by Mose Allison.
Click to expand...

I think you're right.....I'll check that out
"Everything is relative"

The Who recorded at least two studio versions of this track in 1967. They went unreleased until 1998 and 2009, when they appeared on the remastered CD of Odds & Sods and the deluxe edition of The Who Sell Out respectively. Other live versions from the Who are featured in the Monterey Pop Festival CD box set and the concert and documentary film Woodstock (1970), as well as Live at the Isle of Wight Festival 1970 and the CD release of Live at the Royal Albert Hall.
"Everything is relative"