Staff member
Formed in April ’67 in and around the Midlands by the young and talented Steve Winwood (vocals and organ, ex-SPENCER DAVIS GROUP), Dave Mason (vocals and guitar), Jim Capaldi (drums and vocals) and Chris Wood (flute and sax), the group initially purveyed the musically accomplished, thinking man’s psychedelia. The yearning `Paper Sun’ and the dippy but delightful `Hole In My Shoe’ (later covered with great affection by Neil – aka Nigel Planer – of The Young Ones comedy team), gave them two breakthrough UK Top 5 hits. Utilising Mason’s lilting, sitar-like guitar playing, the former record perfectly anticipated the mood of the times, while subsequent work put them right up there alongside The BEATLES.

After their third Top 10 hit in a row, `Here We Go Round The Mulberry Bush’ (from a subsequent film of the same name), the band released their debut album, MR FANTASY (1967) {*8}. The record was a well crafted melting pot of ideas and genres put through the psychedelic blender and given a soulful reading by Winwood’s wholesome vocal chords; the Mellotron-driven `No Face, No Name, No Number’ was one highlight, the title song was another. The conspicuous absence of any of the previous hit singles, however, signalled that, as was the wont of group in those serious muso days, TRAFFIC wished to be considered an “albums” band.
Around this time, Mason split, only to return another six months later, whence the band fashioned their second album, TRAFFIC (1968) {*9}, a marked progression that highlighted theit instrumental dexterity and flowering songwriting talent. Once again, Mason came up with one of the record’s most memorable tunes, `Feelin’ Alright?’, a song later covered by JOE COCKER amongst others. While one hear flashes of rivals CREAM in songs like `Pearly Queen’ and `(Roamin’ Thro’ The Gloamin’ With) 40,000 Headmen’, Steve stamped his authority on the quirky `Vagabond Virgin’.

The ever dependable Mason upped sticks and left once more during the recording of TRAFFIC’s third album, LAST EXIT (1969) {*5}. Aptly titled, this careless rag-bag of below par live and studio tracks did indeed mark the end of Mason’s time with the band (save for a brief spell of live work in the early 70s), and indeed the end of the band itself – for the time being at least. After a spell in short-lived supergroup, BLIND FAITH, Winwood went in to the studio to commence the recording of a mooted solo album with a working title of “Mad Shadows”. When Wood and Capaldi were drafted in for work on the sessions, the project became a fully-fledged TRAFFIC concern.

The resulting album, re-titled JOHN BARLEYCORN MUST DIE (1970) {*8}, was a triumphant return to form, mixing up folk, R&B and jazz into a melee of prog-rock. Taking the traditional title and accompanying 6-minute title track from collected works of folklorist, CECIL SHARPE, the record was a showcase for the vocals of Winwood, while Chris Wood on wind detoured the TRAFFIC from jazz (sax) and folk (flute). All but the aforementioned FAIRPORT-like title track and Steve’s gloriously funky opener, `Glad’, were penned by Winwood and Capaldi; the high sparks – so to speak – stemming from `Freedom Rider’, `Empty Pages’ (a minor US hit) and `Stranger To Himself’.

In the year or so before their next album, the band recruited bassist Rick Grech (from FAMILY and BLIND FAITH), African percussionist Reebop Kwaku-Baah, drummer Jim Gordon (ex-DEREK & THE DOMINOS) and their old mucker Mason. WELCOME TO THE CANTEEN (1971) {*6} was fairly heavy going but no less self-indulgent than your average early 70s live effort, capped-off by an extended improv/jam-esque take of The SPENCER DAVIS GROUP’s `Gimme Some Lovin’’.
Also delivered in 1971, TRAFFIC’s next studio outing, THE LOW SPARK OF HIGH HEELED BOYS {*7}, saw the band add to their not inconsiderable accomplishments despite the cringe-inducing title. From an exhilarating 12-minute title track depicting life on the road for the “everyman” band, to Grech & Gordon’s edited minor hit, `Rock And Roll Stew’, this was another high spot, Top 10 disc in America.

David Hood and Roger Hawkins (both of whom had played on CAPALDI’s solo project, “Oh How We Danced”) respectively replaced Grech and Gordon for 1973’s US Top 10 set, SHOOT OUT AT THE FANTASY FACTORY {*6}. Funky and laid-back in equal measures, the five lengthy pieces (including the 11-minute `Roll Right Stones’) plodded along without much effort, or so it seemed; the Muscle Shoals veteran twosome had tightened up the rhythm section considerably, cutting it on stage and in the studio, as evidenced by the double live album of TRAFFIC’s career, ON THE ROAD (1973) {*6}. On a par with Stateside counterparts, GRATEFUL DEAD, who were known to jazz’n’jam with the best of them, wind man Barry Beckett added to the TRAFFIC alumnus. In such a short space of time, the outfit for many purist progsters had went from psychedelic hipsters to arty-farty jazzateers.

By 1974’s WHEN THE EAGLE FLIES {*6}, the 4-piece TRAFFIC (Winwood, Capaldi, Wood and Baah) were beginning to sound congested. Still, it again reached the US Top 10 (No.31 in Britain), but self-indulgence was par for the course, even VIVIAN STANSHALL (former BONZO DOG BAND kook) got in on the act in “blank-verse style” on the set’s longest track, `Dream Gerrard’.

Much too big and famous for one group to hold, JIM CAPALDI and STEVE WINWOOD both went on to successful solo careers, the former diving in the deep end with a cover of Boudleaux Bryant’s `Love Hurts’, the latter at first with Japanese percussionist, STOMU YAMASH’TA.
On the back of a string of hit albums and the odd single (including `Valerie’), Winwood and Capaldi set aside their differences to reunite TRAFFIC; sadly, without Wood, who’d died of liver failure way back on July 12, 1983. Augmented by Randall Bramblett (keyboards, sax and flute) and Walfredo Reyes (percussion), 1994’s comeback FAR FROM HOME {*5} was little more than a vehicle to re-brand the name. Issued on Virgin Records, it was highly unlikely that spawned singles, `Here Comes A Man’ and `Some Kinda Woman’ (two tracks almost identical to anything in WINWOOD’s solo canon), would follow the set into the Top 40; check it out for DAVY SPILLANE’s piece of uillean pipes on the collaborative, `Holy Ground’. Winwood’s output, in particular was undeniable coffee-table rock at its shiniest, though surprisingly, he was given top billing at the 1997 Glastonbury Festival. In the event he didn’t show, apparently due to illness; his place taken by KULA SHAKER.

Winwood, Capaldi, Randall Bramblett, Michael McEvoy and Walfredo Reyes Jr. were all present and correct for a post-“Far From Home” series of live shows in ‘94, historically documented on the now familiar CD/DVD-dualdisc package, THE LAST GREAT TRAFFIC JAM (2005) {*6}. 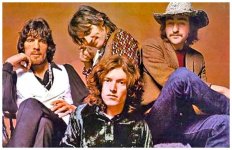