Staff member
Not to be confused with several UFO’s that have landed from Planet Rave (or Rap), this UFO comes from the world we know as Planet Rock – hard and heavy with slices of metal embedded throughout. Notching up over 20 albums with a matching number of personnel switches and swaps in five decades (and a bit!), UFO have had at least one stalwart in singer Phil Mogg, while keyboard player/guitarist Paul Raymond, drummer Andy Parker and bassist Pete Way (who took his final leave in 2011) have run up nearly a century between them; current lead guitarist Vinnie Moore (who joined in 2003) superseded in/out legend MICHAEL SCHENKER.

A classic rock band who’d take many an encore by way of `Doctor Doctor’, `Rock Bottom’ and `Only You Can Rock Me’, U.F.O. formed in north London in October 1969, abandoning their maiden name Hocus Pocus after only a couple of months, when Messrs Mogg, Way, Parker and guitarist Mick Bolton adopted the name of the infamous club, once the centre of psychedelia. Almost immediately garnering a deal at Milton Samuel’s Beacon imprint through agent Noel Moore, UFO worked up a surprising degree of success in Japan and Germany, where their blend of boogie-fied space rock (embellished with extended jams) sold like hotcakes.
Their version of EDDIE COCHRAN’s `C’mon Everybody’ became a massive hit in the Far East, although Britain had shunned their pretentiously underwhelming first two albums. 1970’s U.F.O. 1 {*6} was, in fairness, a stepping stone of sorts, similar in some respects to URIAH HEEP (who’d also re-vamp The WEAVERS’ `(Come Away) Melinda’), BLUE CHEER and BLACK SABBATH, although without the quality control. That aside, the rocky rumblings of`German Top 30 entry `Boogie (For George)’ and a 7-minute rendition of BO DIDDLEY’s `Who Do You Love?’ (via QUICKSILVER MESSENGER SERVICE), were worth revisiting.

When the riff-tidy Bolton departed early in 1972, his place was filled by a succession of guitarists, Michael Schenker (an 18-year-old German from SCORPIONS) finally getting the permanent berth the following June, when Bernie Marsden (who’d replaced PINK FAIRIES-bound Larry Wallis) departed for a bit of WILD TURKEY.

Signing to Chrysalis Records thereafter, UFO changed their style dramatically, hard-rock becoming their pay-master with classic songs such as the aforementioned `Doctor Doctor’ and `Rock Bottom’ featuring “heavily” on their third set, PHENOMENON (1974) {*6}. Almost giving WISHBONE ASH or MAN a run for their money on `Crystal Light’ and `Space Child’, producer Leo Lyons (of TEN YEARS AFTER) yanked up their blues roots in a re-tread of WILLIE DIXON’s `Built For Comfort’.
Between mid ‘74 and early ‘75, UFO added a fifth member Paul Chapman (from Irish combo SKID ROW), although the band soon reverted to a quartet when the guitarist helped form Welsh-based hard-rockers LONE STAR.

While it was down to TYA’s Chick Churchill to supply keyboards on the previous set, producer Lyons and UFO roped in young Argentinian-born Danny Peyronel (ex-HEAVY METAL KIDS) to stand in on the mildly disappointing NO HEAVY PETTING (1976) {*5}. At a time when hard rock and metal were about to be usurped by punk and new wave, it was no time to slacken the reins. Despite a disappointingly low position of 167 in the US, complacency was its own learning curve, although fans would latch on to `I’m A Loser’, `Highway Lady’ and a version of FRANKIE MILLER’s `A Fool In Love’.

Introducing all-rounder Paul Raymond (ex-SAVOY BROWN, ex-CHICKEN SHACK, et al) to supersede Peyronel, LIGHTS OUT (1977) {*8} finally broke some chart ground in Britain, while in America the quintet were hot Top 30 property. A definite improvement (and a “lights on” moment for newbies DEF LEPPARD and IRON MAIDEN), there was both range and exploration on the likes of `Too Hot To Handle’, the cool title track, the lengthy orchestral-led rock ballad `Love To Love’ and a crafty cover of LOVE’s `Alone Again Or’.

1978’s OBSESSION {*7} – opening with the classic hard-rock anthem `Only You Can Rock Me’ – was again plucked from the stars. Almost filling the muddied boots of LED ZEPPELIN while they became a tad “trampled underfoot through the out door”, UFO shone brightly on `Ain’t No Baby’, `Cherry’ and `You Don’t Fool Me’, but the QUEEN-meets-ELTON JOHN-esque `Lookin’ Out For No.1’ took a bit of flak.

Top notch double-live albums were in short supply when punk-rock put heavy dinosaurs to the sword; only really THIN LIZZY, KISS and RUSH had pulled their hard-rock weight of in this era. Then came the colossus STRANGERS IN THE NIGHT (1979) {*9}. Filled to the gunnels with all UFO’s best bits since their signing to Chrysalis, it also marked the sad farewell of their guitar ace, who returned briefly to SCORPIONS before he founded the equally exciting MICHAEL SCHENKER GROUP.

Looking to extend his CV by becoming a permanent fixture, Paul Chapman was really the only choice in the running; his first duties arrived on Top 40 single `Young Blood’, lifted from the George Martin-produced parent album NO PLACE TO RUN (1980) {*5}. Accused of taking their feet off the pedals (possibly the cover of `Mystery Train’ the catalyst), UFO’s American clout was beginning to wane. And with young NWOBHM whippersnappers biting at their ankles, Mogg and Co turned up sounding like BAD COMPANY; prime examples `Lettin’ Go’, `Money, Money’ and the title track. When multi-instrumentalist Neil Carter (ex-WILD HORSES) replaced John Sloman, a fill-in for MICHAEL SCHENKER GROUP-bound Paul Raymond, it was clear the only thing taking off for UFO was its group members.

A further run of three Top 40 sets, THE WILD, THE WILLING AND THE INNOCENT (1981) {*6}, MECHANIX (1982) {*5} – here updating `Somethin’ Else’ – and MAKING CONTACT (1983) {*3}, offered up hyperbole and the usual guts ‘n’ grime, but the absence of Pete Way for the latter, who jumped ship to form his own WAYSTED outfit, was what interested readers of Kerrang! and Sounds; note that Billy Sheehan (ex-TALAS) filled in on tour.

Mogg apparently suffered a nervous breakdown on stage and wound up UFO as a result, only to take time out in sunny L.A. where he found Japanese/American guitarist Atomik Tommy M (alias Tommy McClendon). Nearly half a band intact, they called upon former UFO tour bassist Paul Gray (from punk-rockers The DAMNED and EDDIE & THE HOT RODS) and old mucker Paul Raymond; (ex-DIAMOND HEAD) drummer Robbie France upped sticks soon into their reformation and was replaced by Jim Simpson (ex-MAGNUM) for their final offering for Chrysalis, MISDEMEANOR (1985) {*5}.

Turning to FM Revolver to take control of leftovers mini-set, AIN’T MISBEHAVIN’ (1988) {*3}, it should’ve been all over bar Phil Mogg’s shouting. Paul Raymond had already again bailed for pastures new; replaced by David “Jake” Jacobson (keyboards) for the late ’86 tour. Unsurprisingly, Mogg shut up shop in spring ’88, going into production, mainly for his nephew Nigel Mogg’s up-and-coming act, The QUIREBOYS.

Batteries re-charged and ready to run with the pack again, Mogg and Way did what all rock groups know how to do – re-form. Adding fellow songwriter Laurence Archer on lead guitar (ex-GRAND SLAM), metal journeyman Don Airey on keyboards and the equally dextrous Clive Edwards on drums, HIGH STAKES & DANGEROUS MEN (1992) {*6} was a good return on their investment. Airey didn’t stick around to tour, and it was Jem Davis who performed on LIGHTS OUT IN TOKYO – LIVE (1993) {*6} – recorded at Club Citta, 20th June 1992.

The classic mid-to-late 70s line-up of Mogg, Schenker, Way, Raymond and Parker turned back time to WALK ON WATER {*5}, the name of their 14th studio album, but even the most staunch UFO supporter knew it was only to suck in a few dollars more; yen if one counted its mighty sales figures in Japan.
While the MOGG/WAY connection was worth two sets under their moniker, EDGE OF THE WORLD (1997) {*5} and CHOCOLATE BOX (1999) {*4}, UFO struck up yet another record deal for COVENANT (2000) {*5}. Parker’s berth was taken this time by Aynsley Dunbar, a sticksman who’d played for just about everybody in his time. Sadly, raucous and rollicking as it was (check out `Unraveled’, `Midnight Train’ and `The Smell Of Money’), the record was somewhat overshadowed by an accompanying live bonus disc featuring `Mother Mary’, `Love To Love’, et al).

Paul Raymond would step aside for another set to reach uncharted waters, SHARKS (2002) {*5}, only to return for 2004’s Schenker-less YOU ARE HERE {*4}; Dunbar duly made way for Jason Bonham, son of LED ZEPPELIN’s sadly-missed John. Swapping the German ace for one of America’s most talented lead guitarists Vinnie Moore, UFO were something of a cosmopolitan supergroup with two guys still in the thirties.

Film and television reality shows popped up for workaholic Jason (later to fit in with BLACK COUNTRY COMMUNION and CALIFORNIA BREED, among other things), and it’d be down founder Parker once more to rescue his beloved UFO on album number eighteen, THE MONKEY PUZZLE (2006) {*6}. Rough around the edges but still gravelly with that blues-driven growl, the Mogg man was most effective on `Down By The River’, `Hard Being Me’ and the chunky `Heavenly Body’.
The subsequent departure of Pete Way through illness (a liver condition), left UFO looking again to another bassist; Rob De Luca, on tour at first, was finally chosen for studio work a few years down the line in place of stand-in Lars Lehmann. In the meantime, THE VISITOR (2009) {*6} and SEVEN DEADLY (2012) {*6} restored UFO to the lower echelons of the UK charts; long-time producer Tommy Newton drawing out the blood, sweat and years of every classic rock note.

In a week late February 2015 that saw rivals SCORPIONS hit pay-dirt with their umpteenth set, UFO landed album twenty-one, A CONSPIRACY OF STARS {*6}. Forever and a day exploring fresh ways to deliver what could’ve been just run-of-the-mill metal, UFO and the equally imaginative Chris Tsangarides at the controls, concocted the band’s first Top 50 entry since 1983’s `Headstone – The Best Of…’. In some mixed reviews depending on the listener’s staying power, `The Killing Kind’, `Messiah Of Love’ and `Sugar Cane’ probably stood out for a band rated high in most poll’s Top 100 hard-rock acts.

Jumping ship to twilight imprint, Cleopatra, UFO subsequently plundered the classic-rock karaoke cosmos to sign off with THE SALENTINO CUTS (2017) {*6}. Just where the cryptic nom de plume “Salentino” came from was anybody’s guess, but in covering songs by The DOORS, YARDBIRDS, STEPPENWOLF, MONTROSE, MOUNTAIN, ZZ TOP, ROBIN TROWER et al (not forgetting their re-tread of BILL WITHERS’ `Ain’t No Sunshine’), the band sailed off into the sunset after a lengthy innings. Sadly, prior to Mogg announcing that he would depart the band after their 2019 tour, 73 year-old Paul Raymond died of a heart attack on 13 April 2019; former guitarist Neil Carter would deputise while the band contemplated any future. 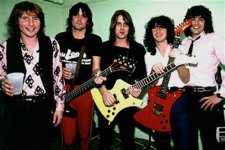