Staff member
The 70s had their fair share of British hard-rock acts, and there were none so hard as the prog-heavy URIAH HEEP – well, maybe DEEP PURPLE, LED ZEPPELIN and BLACK SABBATH. With the almost gymnastic larynx of singer David Byron and the relentless pounding of his power back-up (keyboard player Ken Hensley and showman axeman Mick Box, et al), tracks such as `Gypsy’, `Bird Of Prey’, `Easy Livin’’ and the elongated `July Morning’, have become classic rockers, despite some derision from some critics.

Formed December 1969 in London, England, the aforementioned guitarist Mick Box and vocalist David Byron had both cut their proverbial teeth in mid-60s outfit, The Stalkers; the latter had also featured in a cover version hits compilation singing alongside Reg Dwight, err… ELTON JOHN in other words. A few years earlier, Byron and Box flouted their wares as Spice, having found bassist Paul Newton (ex-GODS), organist Roy Sharland and drummer Alex Napier. A solitary 45 was issued for United Artists; `What About The Music’ failing to sell in any substantial quantities, although it has since become very rare.

Drummer Keith Baker filled in for the ELTON JOHN-bound Olsson prior to their follow-up set, SALISBURY (1971) {*5}, which, like its predecessor sold better in Germany and other parts of Europe. People were beginning to take Byron’s high-pitched, tonsil-tasered warbles seriously; the classic `Bird Of Prey’ – a track from the US version of their debut (entitled “Uriah Heep”) – being a perfect example. Sedate and almost horizontal in their electric folk style, main writer Hensley’s `Lady In Black’ was in stark contrast to the 16-minute, orchestra-laden title track; B-side `Simon The Bullet Freak’ was the Stateside-only substitute track.
Third-time-lucky album, LOOK AT YOURSELF (1971) {*7}, was released on Island Record’s offshoot Bronze imprint, run by producer Gerry Bron. The set featuring new drummer, Ian Clarke. Garnering some decent reviews for a change, the celebrated 10-minute epic, `July Morning’ (with an outstanding guest synths/keys spot from stable-mate MANFRED MANN), helping it to touch the UK Top 40, while also breaking the US Top 100.

A steadier formation was found while recording their fourth album, DEMONS AND WIZARDS (1972) {*8}; Gary Thain (ex-KEEF HARTLEY BAND) took over from short-stop, Mark Clarke (who had replaced Newton the previous November), while Hensley’s old GODS and TOE-FAT cohort/buddy, Lee Kerslake superseded Mark. The results were outstanding, the disc going Top 30 and gold on both sides of the Atlantic, with tracks such as `The Wizard’ and the punchy `Easy Livin’’ (also a US Top 40 hit), becoming URIAH HEEP faves. Thematic, mystical and gothic in their fresh musical vision, the 12-minute medley finale of `Paradise’ and `The Spell’ was breath-taking.

Unleashed only a matter of six months on from D&W, THE MAGICIAN’S BIRTHDAY (1972) {*6}, did much of the same in commercial terms; sleeve artist Roger Dean (of YES fame) was also retained. Lifted from the record, `Sweet Lorraine’, and the acoustically-driven `Blind Eye’, both became minor US hits, while there was the almost obligatory and lengthy title track finale piece – one for the prog-sters.

1973 saw another two gold albums being released, a double-concert set, URIAH HEEP LIVE {*6} and their first studio record for Warner Bros in the States, SWEET FREEDOM {*6}; HENSLEY even found time to release a solo set, “Proud Words On A Dusty Shelf”. Their live – recorded in Birmingham – disc contained a rock’n’roll medley featuring their interpretations of `Roll Over Beethoven’, `Blue Suede Shoes’, `Mean Woman Blues’, `Hound Dog’, `At The Hop’ and `Whole Lotta Shakin’ Goin’ On’. Bookended by Thain-scribed funky cuts, `Dreamer’ and `Sunshine’, the group’s studio recording boasted another classic – Hensley’s `Stealin’’.
Some of their more discerning fans awaiting 1974’s more sombre studio set, WONDERWORLD {*5}. But for the ballsy group composition, `Suicidal Man’, the hard-driving `Something Or Nothing’ and the orchestral-y-led ballad, `The Easy Road’, the transatlantic Top 40 album would’ve suffered further critical pounding. A bad period indeed for URIAH HEEP, Thain was near-fatally electrocuted on stage in Dallas, Texas, subsequently resulting in major conflicts with the manager, Gerry Bron. His personal problems and drug-taking (while recovering from his injuries) led to URIAH HEEP being kept in a state of limbo for some months and after lengthy group discussions, the guitarist was finally asked to leave in the following February; tragically, he died of a drug overdose on the 8th December that year. Meanwhile, the moonlighting HENSLEY, released his second solo set, “Eager To Please”. Another bloke with considerable talents, John Wetton (ex-KING CRIMSON, ex-FAMILY, ex-ROXY MUSIC, et al) was quickly drafted in to record RETURN TO FANTASY (1975) {*6}, a record that hit the UK Top 10. Opening with the often overlooked title track, the album was back to basics, tight-as-a-nut hard-rock with ringing keys and gospel-ish backing vox; `Devil’s Daughter’, `Showdown’ and the bluesy `Your Turn To Remember’, positioning them well in the simplistic-rock stakes.

Appropriately titled, it failed to get off the starting blocks in the US (it barely scraped a Top 100 placing), a thing that could be said of URIAH’s next album, HIGH AND MIGHTY (1976) {*3}, which only checked in at No.55 in the British charts. Disillusioned by their lack of success and the sacking of the solo-bound DAVID BYRON (he had formed Rough Diamond), Wetton, too, decided to jump ship.

Their respective places were filled by vocalist John Lawton (from German rockers, LUCIFER’S FRIEND) and bassist – more famous to BOWIE fans – Trevor Bolder; the ‘Heep that the band had become soldiered on while punk rock/new wave in ‘77 became yet another stumbling block. Subsequent albums (with various comings and goings), FIREFLY (1977) {*5}, INNOCENT VICTIM (1977) {*4}, FALLEN ANGEL (1978) {*4} and the much-improved CONQUEST (1980) {*6}, all failed both commercially and critically; the latter had introduced Welsh geezers, John Sloman (vocals) and Chris Slade (drums).
After a break from music in the early 80s, URIAH HEEP returned with a new line-up, Mick Box enlisting the services of the returning Kerslake, Peter Goalby (vocals), John Sinclair (keyboards) and Bob Daisley (bass), to complete a comeback album of sorts, ABOMINOG (1982) {*7}, a record released on the back of the NWOBHM explosion that deservedly returned them to the charts on both sides of the Atlantic. Another slick set of sorts, HEAD FIRST (1983) {*5}, showed the rock world they had not given up just yet; fans of BRYAN ADAMS or indeed its author, Jim Vallance, might recognise `Lonely Nights’. The formulaic pop-metal of EQUATOR (1985) {*3} – featuring Bolder and not Daisley – was not worthy of a once great act, an act that had included David Byron, who sadly passed away from an alcohol-related death on 28th February 1985.

With their umpteenth personnel change (Bernie Shaw replacing Goalby, and Phil Lanzon superseding Sinclair), they even became the first ever heavy-rock act to play in the U.S.S.R in ‘87. An accompanying concert double, LIVE IN MOSCOW (1988) {*6}, helped them resurrect some old gems. A year later, the band plucked up some degree of courage in covering a heavy rock version of ARGENT’s `Hold Your Head Up’, which became a track on the 1989 set, RAGING SILENCE {*4}; STILL ‘EAVY, STILL PROUD (1990) {*3} – a concert set – and DIFFERENT WORLD (1991) {*3}, achieved very little in their DEF LEPPARD-meets-KANSAS rip-off regime.
Coming up for air in 1995, SEA OF LIGHT {*5}, was a stark improvement, Box and the boys resurrecting their glory hard-rock days in AOR style; Roger Dean was re-instated for the cover painting. The live SPELLBINDER (1996) {*4} resurrected the songs from these great times, although its clear the capable Shaw was no match for the mighty Byron.

Originally only available on import, SONIC ORIGAMI (1999) {*4} was probably best served to enthusiastic Japanese punters, and there was nothing really exciting about any of the AOR ballads. The live double, FUTURE ECHOES OF THE PAST (2001) {*6}, was just what the doctor ordered – a much needed shot in the arm from Messrs Box, Bolder, Kerslake, Lanzon and Shaw. Recorded over two nights in Germany (late November 1999), it was miles better than the subsequent, simultaneously-released live sets, ACOUSTICALLY DRIVEN {*4} and ELECTRONICALLY DRIVEN (2001/2) {*4}.

The spate of live-in-concert CDs continued to flood the market, although the all-star THE MAGICIAN’S BIRTHDAY PARTY (2002) {*6} – featuring Ken Hensley and John Lawton, plus guest flautist Thijs Van Leer of FOCUS on `Between Two Worlds’ – was worthy of its release. The same could not be said for LIVE IN THE USA (2003) {*4} and MAGIC NIGHTS (2004) {*4}.

Nine years was a long time for eager fans to await their next studio outing (their 21st in all), but WAKE THE SLEEPER (2008) {*7} reclaimed the glory that was lost after “Return To Fantasy”. Sadly, the ill health of Kerslake led to him taking his leave; Russell Gilbrook more than satisfactory on the excellent `Angels Walk With You’, `Tears Of The World’ and `Light Of A Thousand Stars’. INTO THE WILD (2011) {*6} continued the back-to-the-70s feel, while the self-explanatory double-disc LIVE IN ARMENIA (2011) {*6} tied in the old with the new.

Without their journeyman bassist Trevor Bolder (who died of cancer the previous May), 2014’s OUTSIDER (2014) {*7} introduced Dave Rimmer to the fold. Produced by Mike Paxman, the Lanzon-led URIAH HEEP relay their “Box” of tricks for tracks that hark back to the 70s/80s, although with modern-day production techniques. If Purple and Quo could manage to maintain the traits of time-travel, why not the Heepsters? For many “outsiders” they come across as the Lib-Dems of hard-rock, good enough to share a musical coalition on occasion, but not to elect as leaders of the pack. Still, with strong songs such as `Speed Of Sound’, `Wake The Sleeper’, `Kiss The Rainbow’ and `One Minute’, the band might garner enough seats in the house for a comeback into the charts; other than in Germany, Finland and the Netherlands; LIVE AT KOKO: London 2014 {*7} kept up the momentum when dropped the following February.

URIAH HEEP will be best remembered for their “very ‘eavy, very ‘ard” 70s sound and style, more than mimicked by a plethora of 80s rock acts too numerous and risky to mention; apart from SPINAL TAP, maybe.

Them heavy people, them URIAH HEEP stalwarts were back in tow for 2018’s long-awaited 25th studio album, LIVING THE DREAM {*7}. Perennially overlooked by the metal fraternity as a commercial entity, this Jay Ruston-produced set was their best effort in yonks to rectify that sad situation. Okay, there’s was a contrived sound left behind by DEEP PURPLE, but fronted by Bernie Shaw, echoing songs such as `Grazed By Heaven’, the title track, `Take Away My Soul’ and the prog-ish 8-minute `Rocks In The Road’ stood tall among anything tossed up by their plethora of peers. 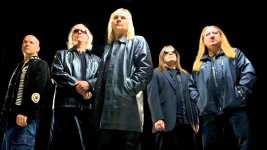 Luv this ballad ......listen carefully to the lyrics