Staff member
Arena-rock and hair-metal were never so illustrious than with VAN HALEN. Fronted by pouting poseur extraordinaire David Lee Roth, a showman singer who was touted as the next ROBERT PLANT, the high-standing quartet were also blessed with legend and “God of Guitars”: Eddie Van Halen. Essential riff-tastic hard-rock for the metal connoisseur, the band probably peaked when `Jump’ bounced to the top of the charts in ’84, although this seemed to be cue for ROTH to take up his own career. Veteran frontman SAMMY HAGAR was up for the daunting prospect of superseding him, as was, in time, former EXTREME chanter, Gary Cerrone; HAGAR and, more recently, ROTH, have returned to the fold.

Formed in Pasadena, California in 1974 by Dutch-born brothers Alex Van Halen (drums) and the aforementioned Eddie (their father played in wedding bands), the pair kick-started their rock campaign as Mammoth, recruiting blond-maned high priest of partying, David Lee (from Redball Jet), and bass player Michael Anthony (ex-Snake). As the Mammoth moniker was already in circulation, the group chose to simply call themselves VAN HALEN, building up a solid reputation as a covers outfit on L.A.’s Sunset Strip. Gradually introducing original material into their set, the technically-gifted Eddie and Co eventually signed to Warner Brothers in ’77 on the strength of a GENE SIMMONS financed demo tape. Impressed by its blend of metal and melody, label boss Mo Ostin and in-house producer Ted Templeman, duly worked with the group on their eponymous debut album, VAN HALEN (1978) {*9}.

Coming at a time when hard rock was in seemingly terminal stagnation with punk rock and new wave snapping at its heels, the set redefined the boundaries of the genre; from the back cover shot of a shirtless Roth (chest-wig de rigueur!) sporting leather flares to the opening three-chord Top 40 mash-up of The KINKS’ `You Really Got Me’, VH dripped effortless cool, the golden elixir of sun-bleached California coursing through their collective veins; the other cover was of John Brim’s `Ice Cream Man’, while `Runnin’ With The Devil’ and `Jamie’s Cryin’’ could also be filed under classic rock. Then there was `Ain’t Talkin’ ‘Bout Love’, Eddie casually reeling off the razor-edged, caterwauling riff (resurrected hence by dance bods, APOLLO 440), while Roth drawled his most lascivious, sneering drawl. And basically, this was what set VAN HALEN apart from the spandex pack; DLR actually sang rather than screeching like an asphyxiated budgie, while in Eddie, the group boasted one of the most inventive and single-mindedly talented guitarists in the history of metal.

Okay, `Eruption’ may have been responsible for countless fret-toss crimes but it’s still impossible not to be impressed by the man’s vision; his innovations (flying-fingered hammer-ons, leaving a still smoking cigarette nudged in at the top of the fretboard, etc.) becoming base material for any aspiring 80s guitar hero. Essentially, VAN HALEN were glamorous as opposed to glam, and for a few heady years they made heavy metal desirable. Though the debut album barely nudged into the US Top 20, it would go on to sell in excess of five million copies and remain one of thee classic hard-rock releases.

A follow-up, VAN HALEN II (1979) {*7} didn’t pack quite the same punch, although it made the US Top 10 and spawned the group’s first Top 20 single, the dreamy `Dance The Night Away’. As near an exact replica of their glorious debut, right down to formulaic cover of Betty Everett’s `You’re No Good’ (the acoustics on the minute-long `Spanish Fly’ showed Eddie’s dexterity), the tight-knit group sound as if they’re having a party on AEROSMITH-esque anthemic numbers, `Bottoms Up!’, `D.O.A.’ and `Beautiful Girls’.

1980’s WOMEN AND CHILDREN FIRST {*8} added a sonic swagger to the proceedings; their molten metal manifesto striking a cord through the chunky `And The Cradle Will Rock…’ (a minor hit), the tribal `Everybody Wants Some!!’, the bluesy `Fools’ and the speed-metal of `Romeo Delight’. Even the quieter, stickier moments of `Take Your Whiskey Home’, `Could This Be Magic?’ and `In A Simple Rhyme’, rawked, rattled and rolled, never swaying from their mission to shake a hairy head or three.

Released in April ’81, the same month as Eddie married actress Valerie Bertinelli, album number four, FAIR WARNING (1981) {*7}, consolidated the band’s standing, both commercially (Top 5) and critically. Trouble was, there were no immediate hits, although standing out from the pack were mainstream rock staples, `Mean Street’, `Push Comes To Shove’ and `Unchained’. A serious half-hour rather just another fun-packed party (`So This Is Love?’ being the exception), the record takes on a brooding and brash side-step.

It wasn’t until Top 5 set, DIVER DOWN (1982) {*6}, that VAN HALEN began to cast their net wider. Renditions of The KINKS’ `Where Have All The Good Times Gone’, MARTHA & THE VANDELLAS’ `Dancing In The Street’, Ager-Yellen’s `Big Bad Bill (Is Sweet William Now)’ and Dale Evans’s `Happy Trails’, were topped by a Top 20 cover of ROY ORBISON’s `(Oh) Pretty Woman’; fans of their original compositions would be grateful for `Hang ‘Em High’ and `The Full Bug’. Toward the end of the year, Eddie famously flashed his fret-board skills on MICHAEL JACKSON’s `Beat It’ single (a hit in ’83), gaining valuable crossover exposure, although by this point, VH were already one of the biggest hard rock acts in the world.

This was proved with the massive success of their 1984 {*8} opus, while attendant synth-heavy single, `Jump’ scaled the charts. For many people, especially in Britain, this was the first time they’d witnessed “Diamond” David in action, the loose-limbed singer, as ever, performing death-defying feats of stage acrobatics in the accompanying video. While the album saw VAN HALEN successfully tackling obligatory 80s experimentation (which did for many of their peers), the likes of MTV faves `I’ll Wait’, `Panama’ and `Hot For Teacher’ carried on the grand tradition of tongue-in-cheek lewdness and six-string trickery.
Incredibly, at the peak of their success, unable to get to grips with their fresh, synthetic sound, DAVID LEE ROTH jumped ship for a solo career in ‘85, taking his not inconsiderable wit, charisma and sly humour with him. Though VAN HALEN chose to rumble on, it was a rather different beast which reared its head in early ‘86 with the single, `Why Can’t This Be Love’.

Now featuring ex-MONTROSE man, SAMMY HAGAR on vocals, VAN HALEN had created their most consistently accessible and musically ambitious set to date in 5150 (1986) {*7}, although the absence of ROTH’s cheeky innuendo was glaringly obvious. If not gone completely, the group chemistry had been irrevocably altered, in effect, making VH just another hard rock band, albeit highly professional and massively successful. The set gave the revamped group their first No.1 album; power ballads and soaring anthems like `Dreams’, `Best Of Both Worlds’ and `Love Walks In’, the order of the day.

OU812 (1988) {*6} was another platinum-selling chart-topper (and their second consecutive Top 20 in Britain); VAN HALEN now virtually a US institution guaranteeing massive sales with every successive release, including four US hits, `When It’s Love’, `Finish What Ya Started’, `Black And Blue’ and `Feels So Good’.
FOR UNLAWFUL CARNAL KNOWLEDGE (1991) {*5} – or “F.U.C.K.” in its abbreviated form (very clever, lads) – saw the group adopt a heavier approach, although this didn’t prevent the chart-topping set from selling in bucketloads; VAN HALEN holding their own in the age of grunge when many of their contemporaries suddenly seemed embarrassingly outdated; `Top Of The World’ and `Right Now’ were both hits.

A long overdue live album, RIGHT HERE, RIGHT NOW (1993) {*5}, was packaged as a two-CD set, but despite all the grandeur and solo guitar spots for Eddie, they seemed to settle for recent recordings, only a good take of `Ain’t Talkin’ ‘Bout Love’ and the medley-segued `You Really Got Me’ were of the ROTH era. HAGAR was also afforded two pieces from his solo salad days (`One Way To Rock’ and `Give To Live’), while the group sank their teeth into WHO classic, `Won’t Get Fooled Again’.

A rare European tour no doubt helped boost UK sales of BALANCE (1995) {*5}, yet another US No.1 album and their first Top 10 placing in Britain; WHITESNAKE-esque singles `Don’t Tell Me (What Love Can Do’ and `Can’t Stop Lovin’ You’, stuttered outside the Top 20. But things were decidedly jagged and fraught for the band as tensions arose between Eddie (who was finding alcoholism a tough hole to get out of) and SAMMY HAGAR, the result being that the singer was pushed unceremoniously out of the band. A returning ROTH had already been touted as his replacement during this period, however, after a compilation set in which he appeared on a few reunification songs, the man was again left out in the cold, perturbed slightly when it was claimed he was only a temporary fixture.
In the wake of consecutive casualties, ROTH and HAGAR, the reputation of their guitarist was slightly tarnished, although things seemed to take an upsurge when former EXTREME frontman, Gary Cherone, took up the vacant position. VAN HALEN III (1998) {*3} might’ve peaked at No.4, but the set was far from satisfying. But for `Without You’ and `Fire In The Hole’, the ill-timed album might’ve alienated all but their bravest fans; Cherone, himself, was surplus to requirements in ’99. A trying time for Eddie as rumours of a VAN HALEN/ROTH reunion were abound, he also disclosed he’d been diagnosed with cancer, and while he was receiving treatment on his way to a complete recovery, the guitarist separated from his spouse, Valerie.

In 2004, Eddie re-formed VAN HALEN yet again, this time choosing SAMMY HAGAR to spearhead and promote a US/UK Top 3 anthology set. Meanwhile, Anthony had made guest appearances for the singer in his Warboritas project, a permanent place was kept open as HAGAR (now of CHICKENFOOT) opted out again; Eddie’s son Wolfgang was drafted in full-time on bass.

Several years in the wilderness, and longer since a fresh album release, with nearly three decades without their pivotal showman, ROTH was again re-instated for the group’s comeback album, A DIFFERENT KIND OF TRUTH (2012) {*7}. Opening with the sassy rocker, `Tattoo’, the record was stripped of anything synthetic, the group going as far as relying on reviving and revamping several pre-1978 demos. Raucous and rambunctious from the get-go, Eddie’s chucky guitar slices kick in on speed-metal treasures, `She’s The Woman’, `China Town’ and `Bullethead’. Probably their swansong studio effort, but who knows what might prevail.

In the meantime, fans had to fork out the price of a wee “Tattoo” for the double-CD, LIVE – TOKYO DOME IN CONCERT (2015) {*6}. The dream reunion intact, although Roth’s hoarse vocal might’ve done with a bit TLC, VAN HALEN ran through all their best-loved show-stoppers, topped off by encores for `Ain’t Talkin’ ‘Bout Love’ and `Jump’. 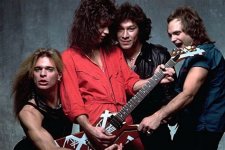 Both Roth and Hagar were good frontmen respectively......