Staff member
Formed in London, England in 1977, WHITESNAKE were the brainchild of ex-DEEP PURPLE-cum-solo singer DAVID COVERDALE (born 22 September 1951, Saltburn-on-Sea, Yorkshire). From unobstrusive days as frontman for Denver Mule, The Government (who issued an EP in 1971) to River’s Invitation and The Fabulosa Brothers, it seemed David’s career was going nowhere fast. And then he answered an ad in the Melody Maker not knowing that it was premier heavies DEEP PURPLE. His luck changed almost overnight. With only three latter-day ‘Purple sets (`Burn’, `Stormbringer’ and `Come Taste The Band’) under his belt, the power-ballad specialist recorded two below-par sets of bluesy hard-rock, namely WHITESNAKE (1977) {*4} and NORTHWINDS (1978) {*5}.

None of them particularly exciting, both featured DEEP PURPLE’s ROGER GLOVER as the producer and guitarist Mick Moody as co-songwriter, and if there were any songs that stood out from the pack, maybe `Blindman’ (from his debut) and `Keep On Giving Me Love’ (from the second) were worthy.

Adopting the name for his new outfit from the former LP and settling with a core of musicians which included such seasoned veterans as Moody, second guitarist Bernie Marsden, keyboards man Pete Solley, bassist Neil Murray and drummer Dave Dowle. A deal with E.M.I. International led to the SNAKEBITE (1978) {*4} album, the record’s highlight being a smoky cover of Bobby Bland’s bluesy `Ain’t No Love In The Heart Of The City’ – its first of many outings.

Buoyed by something of a rebirth among former ‘Purple acolytes (keyboardist JON LORD had joined), WHITESNAKE duly cracked the UK Top 50 with their next album, TROUBLE (1978) {*6}. Sadly, the group were still short of a hit single, although the easy-going `Lie Down (A Modern Love Song)’ and `The Time Is Right For Love’ (sitting uncomfortably alongside a funky FREE-like take of The BEATLES’ `Day Tripper’), might’ve made it big with more airplay.

Produced by Martin Birch, their heavy BAD COMPANY-meets-LED ZEPPELIN bluesy sound was beginning to take shape on tracks such as `Long Way From Home’ (a minor hit), the CHUCK BERRY-esque `Rock’n’Roll Women’, `Walking In The Shadow Of The Blues’ and a cover of LEON RUSSELL’s `Help Me Thro’ The Day’.
Increasing his DEEP PURPLE cred by one by way of the added attraction of drummer Ian Paice, READY AN’ WILLING (1980) {*6}, the success of its attendant lead-off single `Fool For Your Loving’ pushed the album into the Top 10 (Top 100 Stateside). Revisiting `Blindman’ and finding their formulaic freedom via `Ain’t Gonna Cry No More’, `Sweet Talker’ and `She’s A Woman’, the band were certainly ready, willing and able to fill the gap in the market left by the now defunct DEEP PURPLE, their musical prowess securing them an enviable live reputation if not quite measuring up in the songwriting department.

Consequently then, the band’s only official concert set, LIVE… IN THE HEART OF THE CITY (1980) {*6}, ranked as one of the most consistent recordings of their career. A double set, highlighting choice cuts from their patchy studio recordings, fans were treated to a 10-minute rendition of `Love Hunter’ (and further extended greats), plus two ‘Purple patch “profiteroles” `Mistreated’ and `Might Just Take Your Life’.

The ‘Snake’s most successful album to date (narrowly missing No.1), COME AN’ GET IT (1981) {*4} was something of a disappointment, the group moving away from their bluesy roots towards a neutered hard-rock sound. Critics also rounded on COVERDALE’s notoriously sexist, cliche-ridden lyrics, complaints which were water off a duck’s back to the blond-maned, mouth-full-of-plums cock-rocker. Apart from `Hot Stuff’, and hits `Don’t Break My Heart Again’ and `Would I Lie To You’, there was little to shout home about and evergreen. With Marsden moving on to form his own Alaska outfit as he was superseded by Mel Galley, SAINTS & SINNERS (1982) {*7} rescued the situation somewhat, the tight delivery of power-ballad `Here I Go Again’ (a Top 40 hit), `The Sun Is Shining’ and `Crying In The Rain’, the latter their most blues-iest by far, helping the record garnered another UK Top 10 placing.

Despite personnel shuffles which saw new faces such as Colin “Bomber” Hodgkinson (however brief), Cozy Powell (not exactly new) and top axeman John Sykes (ex-TYGERS OF PAN TANG) settle in, DC finally found a sympathetic writing partner in Galley as evidenced on the much improved SLIDE IT IN (1984) {*7} album. Blatant innuendo was still high on the agenda, but then again, that’s what Coverdale excelled at, his panting and moaning all over the shop on the epic climax-blues stomp, `Slow An’ Easy’, actually as effective as it was hilarious; and there were a few hits via `Guilty Of Love’ and `Give Me More Time’.

Never the most stable of bands, the tour that followed saw WHITESNAKE eventually reduced to songwriters Sykes and Coverdale, even LORD bogged off to join the re-formed DEEP PURPLE. Recruiting Tony Franklin and Carmine Appice, the group eventually returned with 1987 {*7} – retitled Stateside as the eponymous WHITESNAKE, a sleeker, (some might say) sexier, and considerably more commercial than ever before. Previewed by the Top 10 LED ZEPELLIN-esque, `Still Of The Night’, the album stormed both the British and US charts. The latter track was the hardest fare on offer, however, the bulk of the album made up of limp MTV ballads like `Is This Love’ and re-vamps of old songs, the infectious re-working of `Here I Go Again ‘87’ giving the group their first and only US No.1. While the album no doubt alienated many of their previously loyal older fans, it sold millions, finally giving Coverdale the success he’d long desired. On February 17, 1989, David married actress Tawny Kitten, who’d previously featured on their video of `Is This Love’.

Meanwhile, the group’s newfound success didn’t do much for their stability, however, as Sykes split for hard-rockers Blue Murder, and Coverdale once again recruited a whole new line-up numbering Dutch guitarist Adrian Vandenberg, bassist Rudy Sarzo, drummer Tommy Aldridge; guitar wizard STEVE VAI subsequently replaced Irishman Vivian Campbell and this line-up gave a rather lacklustre headlining performance at the 1989 Monsters Of Rock Festival, while the highly anticipated SLIP OF THE TONGUE (1989) {*6} equally uninspiring. Moments that surpassed the usual ballsy R&R came through `The Deeper The Love’, `Now You’re Gone’ and a re-tread of another nugget `Fool For Your Loving’. Unsurprisingly, the record failed to match the giddy commercial heights of its predecessor and DC put the band on ice while he subsequently delivered his first solo outing for some time, `The Last Note Of Freedom’, a single lifted from the Days Of Thunder OST.

Subsequently hooking up with JIMMY PAGE for the cross-Atlantic Top 5 COVERDALE PAGE {*6} album in 1993, there more than a hint of the LEZ ZEPP comparisons in “through the out door”-like tracks `Shake My Tree’, `Pride And Joy’ and `Over Now’; the rather more sedate `Take Me For A Little While’ was a deserved UK hit.

Last sighted on a tour of Europe in support of a 1994 greatest hits collection, DAVID COVERDALE & WHITESNAKE delivered a UK Top 40 comeback album, RESTLESS HEART (1997) {*5}, a record that failed to win over American record companies. Resting on the shoulders of just Coverdale and Vendenberg, the live and stripped-bare STARKERS IN TOKYO (1998) {*5} was another cash-in on the “Unplugged” series.

With the metal/hard-rock scene changing almost beyond recognition, it looked more than unlikely that WHITESNAKE could repeat the glory days of the late 80s. But there was still life in the old dog yet. While his new cropped-maned image may of shocked a few of his older fans, not to mention a few small children, the song, basically remained the same on COVERDALE’s 2000 solo set, INTO THE LIGHT {*5}. His first since Northwinds way back in ‘78, the record featured a solid if unadventurous selection of the man’s trademark bluesy hard rock and histrionic balladry, co-written largely with veteran guitarist Earl Slick; check out `River Song’, `Love Is Blind’ and `Too Many Tears’.

After a lengthy sabbatical, an all-new WHITESNAKE – featuring journeymen Doug Aldrich (his new co-conspirator), Reb Beach, Tommy Aldridge, Uriah Duffy and Timothy Drury – were back in action, documented on the monster double-CD LIVE: IN THE SHADOW OF THE BLUES (2006) {*6}.With just about the same line-up (Chris Frazier in for Aldridge), comeback studio set GOOD TO BE BAD (2008) {*6} recalled better days, as the record reunited them with chart success (Top 10 in Britain). Whether `Can You Hear The Wind Blow’, `A Fool In Love’ and `’Til The End Of Time’ could match the earthiness of old, only time will tell. Meanwhile, there was another solid, if not classic WHITESNAKE album (their 11th) courtesy of FOREVERMORE (2011) {*6}; the revolving-door line-up was once again bringing in new rhythm section, Michael Devin and Brian Tichy to bolster the sound of rockers such as `I Need You (Shine A Light)’ (think FACES-meet-DEEP PURPLE), `One Of These Days’ and `Whipping Boy Blues’.

Foremost “Forevermore” fans of WHITESNAKE were only too happy to fork out for the obligatory double-CD/DVD, MADE IN JAPAN (2013) {*6}, recorded at the Loud Park Festival in the Saitama Super Arena.
Swapping Aldrich for a returning Aldridge, again! (guitarist Joel Hoekstra from NIGHT RANGER and keyboardist Michele Luppi, the newbies), Coverdale’s WHITESNAKE would come full circle by way of the Top 20 THE PURPLE ALBUM (2015) {*7}. Blasting out his mid-70s era DEEP PURPLE re-works, there was no big surprises track-wise, just the explosive weight and sonic power put into the likes of treasures such as `Burn’, `Stormbringer’, `You Keep On Moving’, `Might Just Take Your Life’ and `The Gypsy’.

`You Keep On Moving’, `Might Just Take Your Life’ and `The Gypsy’. Squeezing every last drop of spondulicks from this venture, the belatedly-issued THE PURPLE TOUR (2018) {*6} closed the chapter.

2019’s FLESH & BLOOD {*7} was gratefully received by WHITESNAKE’s many followers of straight-laced hard rock. Bolstered by the set’s best track, `Hey You (You Make Me Sick)’, plus fan faves `Trouble Is Your Middle Name’, `Shut Up & Kiss Me’ and opening cut, `Good To See You Again’, the album gate-crashed the Top 10 in Britain. Remarkably, in this day and age, America was lesser impressed (#131), compared to the Swiss and the Germans where sales-figures hit Top 3 proportions. 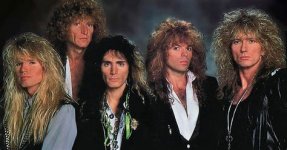