Staff member
Once upon a time, I had an idea that I could write an epic, multi-section poem titled 'life', or if not titled anything as obvious as 'life', meaning the same thing but more intellectually. Pretentious? Damn, right! Now, I had this idea one evening whilst talking to a girl from Manchester I was seeing at the time. Her eyes were beautiful, I was beautiful - we'd both had a few drinks and I was absolutely convinced ( that one night only ) that I was a genius. The next morning, or the next week - whenever I looked over the idea for the poem once again in the cold harsh light of day - I came back down to earth very quickly. Who was I kidding? But, ambition isn't necessarily something to be laughed at. I lacked any kind of tools, or skills, to pull off such a piece of writing at that time. Idea's way above my station! Which leads neatly into the first stirrings of an idea in Jon Anderson's brain in a Japanese hotel room before a concert one particular evening. He found himself ( as you do ) leafing through Paramhansa Yoganada's 'Autobiography of a Yogi' and got caught up in a particular passage and with a particular idea. This idea was "the four part shastrick scriptures which cover all aspects of religion and social life as well as fields like medicine, music, art and architecture". So, Jon Anderson gets all excited, gets Steve Howe reasonably excited, and some time later, 'Tales From Topographic Oceans' was complete.

Now, let's say Yes had released a single album instead of a double in the place of 'Tales'. Jon's four part idea would have likely ended up one four part, 40 minute song! But, Jethro Tull for one, had already done 'Thick As A Brick', an album long composition ( in two parts, in their case ) so I suppose that idea was out. They could have forgotten the idea of this four part 'scripture' and made a regular album. But, that would have been seen as a repetition of previous Yes work, hardly a good thing for a group involved in the progressive movement. So, a double album it was. Four movements, one for each side of the original vinyl release, topped off with a fabulous Roger Dean painting. Hmmm, tasty! Rick Wakemen ended up leaving Yes following the tour for 'Tales', not understanding the concept, the music or the composition. He couldn't feel what he was meant to be playing. Bill Bruford ( legendary prog/rock 'sticks' man ) had bailed out prior to 'Tales', and all of this was chinks in the mighty Yes armour. The 'tales' tour by the way used 40 times the amount of equipment Yes had used to tour just 12 months previously. Hot air balloons, the works! I've not even mentioned the actual album itself. Adored or despised by fans, it generates heated debate to this day. Members of Yes come across as almost apologetic in certain interviews. This was the album that partly 'gave birth' to Punk, after all - one of the big things held up by Punk musicians as a reason their work had to exist in the first place. Punk 'needed' to wash away all those pesky bearded Prog fellows and their 'ludicrous' concept albums and music purporting to be some kind of link to the heavens. Well, you get the drift.

One thing noticeable when listening to 'Tales From Topographic Oceans' is that the band don't sound quite as 'together' as they did on the previous couple of albums. This is easily explainable. Steve Howe and Jon Anderson wrote the lions share of 'Tales'. Rick Wakeman had grave misgivings about the whole project, Chris Squire contributes of course, as did Wakeman, but this was certainly Jon Anderson's project and he'd primarily worked it out with Steve Howe. Yes had a new drummer of course, which is a change in itself. Not that the new drummer wasn't a talented drummer or anything like that, but any change in personnel is going to change the group dynamic, in at least a small way. I just get the feeling Yes weren't quite firing on all cylinders here, that not all the group members were giving 100% to the music or the composition. With such talented musicians as Yes undoubtedly possessed, this wasn't at all fatal, but it does mean there's nothing as tight and thrilling as, say, 'Roundabout' on this collection. Another thing I've noticed is not so much that the songs overstay their welcome but rather they simply don't know 'how' to end. This is particularly noticeable with 'The Ancient' and 'Ritual'. With 'The Ancient', the lyrics are done, it fades out, but then two minutes of jamming come in bearing little relation to what else has gone on with the piece, and then it fades out. No 'ta-da!' kind of ending, just a rather superfluous piece of music 'tacked' onto the end. 'Ritual', after taking us through many remarkable and lovely musical passages simply fades out. It doesn't so much end as stop. Certain passages in each one of the four tracks here seem on the face it, redundant, included for no clear purpose but repeated listening seems to fit them in eventually. Yeah, the songs probably are all too long, yeah, this isn't as tight and concise as previous Yes. But, this is still an occasionally beautiful record.

Trying to condense eighty plus minutes of this music into a single review is going to be impossible, I've realised, so I'll use these last paragraphs to pick out certain sections, and to go over each one of the four tracks in brief. Initially, the very opening to 'The Revealing Science Of God', some kind of chanting from Jon Anderson sounds horribly prog, and you are immediately inclined to believe every single bad thing said about the entire genre! But, once you've realised 'The Revealing Science Of God' as a whole piece is actually rather good it sounds perfectly natural. Weird keyboard sounds come in, guitar, bass and drums. Yes music! There is a point later in the song where it drifts off slightly, and you could be forgiven for losing your patience or attention to what's going on, but it is worth staying until the end of this twenty minute, twenty seven second song. Really! This is the most 'traditional' sounding Yes song music wise on the entire record. 'The Remembering' onwards, things get a little stranger. 'The Remembering' is my least favourite of all the four pieces here, the one I have most difficulty retaining enjoyment and concentration all the way through. Even this has some truly interesting sequences, though. Great guitar and bass interplay appears around the thirteen minute mark, watch out for it!! 'The Ancient' is very interesting, very modern sounding in a strange sort of way. The sleeve-notes remark that "Steve's guitar is pivotal in sharpening reflection on the beauties and treasures of lost civilisations." Really? So, this isn't 'Wild Thing' by The Troggs then? No matter.

'The Ancient' even more so than 'The Revealing Science Of God', which although contains more urgent energy and recognisable Yes music doesn't quite manage to be fully cohesive, is the one piece here that is satisfying from beginning to ( almost ) end. Steve's guitar, whether reflecting upon lost civilisations or not, does a whole lot of great things, washes of truly lovely and yes, holy, sounding keyboards come through. Weird jerky bass rhythms. The initial sequence of lyrics isn't so much sung as slowly dripped out. The song changes around the twelve minute mark and goes all medieval folk on us. Beautiful playing, though. Truly beautiful guitar. 'The Ancient' is a triumph, and I'll speak of it no more! 'Ritual' closes the album, more beautiful sequences, lovely harmonic sections. The section to particularly watch out for here is the part that comes in just after the twelve minute mark. Funky bass lines and good drums parts and a kind of semi-shaking, semi-smashing sound all go wild, urgent, fantastic Yes music. Weird percussion and sounds follows this as the guitar and bass drops out. Not quite a drum 'solo' as such, but it may as well be. Just a section of primitive pounding, although wonderfully and impressively executed. Scary horror movie keyboard parts come in, and..... a horrible burst of noise and then Jon Anderson comes back singing over a nice mellow sequence, singing quite beautifully, too. Appropriately, this review isn't so much going to end, as not know how to finish. I'll finish it........ now.

Track Listing:
The Revealing Science Of God
The Remembering
The Ancient
Ritual 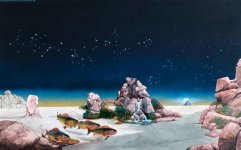